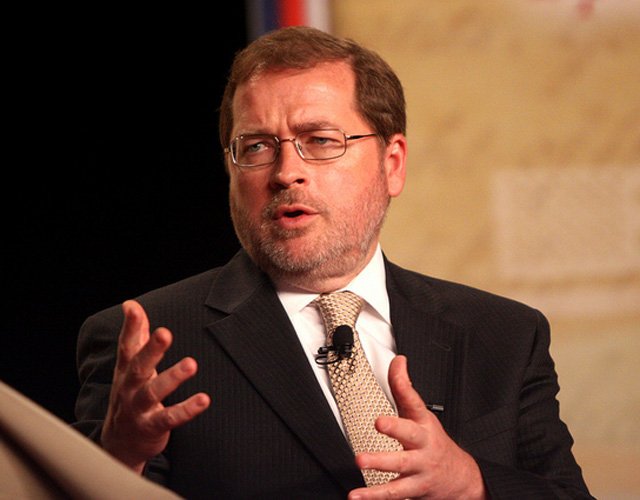 Americans for Tax Reform, the conservative advocacy group run by activist Grover Norquist, plunged headlong into federal elections in 2012, urging voters in California, Colorado, and Ohio to oust Democratic lawmakers. In all, ATR told the Federal Election Commission that it spent nearly $16 million last year on independent expenditures—political ads urging voters to support or defeat a particular candidate that aren’t coordinated with any candidates or parties.

Norquist’s group recently submitted its 2012 tax filing to the IRS, detailing all its spending for last year. In that filing, ATR says it spent just $9.8 million on politics in 2012—a difference of some $6 million compared to what ATR told the FEC.

On Tuesday, Citizens for Responsibility and Ethics in Washington, a nonpartisan watchdog group, seized on that discrepancy in a complaint filed with the IRS and Justice Department. CREW alleges that Norquist’s group misled the IRS about the extent of its political spending.

ATR may have had reason to low-ball the political spending figures it reported to the IRS. Norquist’s group is a 501(c)(4) nonprofit, also known as a social welfare organization. Under the tax law, 501(c)(4) nonprofits such as ATR—which do not have to disclose their donors—can wade into campaigns and elections but cannot spend a majority of their money on political activities. From only reading ATR’s 2012 tax filing, the group appears to abide by that restriction: ATR reported spending a total of $30 million in 2012, only $9.8 million of which went toward politicking. No issue there.

But if ATR in fact spent nearly $16 million of its $30 million budget on politicking, as CREW claims it did, then that’s a different story. “ATR’s own IRS and FEC filings provide incontrovertible evidence that ATR is breaking the law,” CREW executive director Melanie Sloan said in a statement. “If Al Capone could be nailed for tax violations, so can Grover Norquist.”

ATR spokesman John Kartch says CREW’s complaint is “baseless” and “nonsense.” He added, “Americans for Tax Reform’s reporting strictly abides by the definitions of political activity and political expenditures maintained by the FEC and IRS.”

This isn’t the first time CREW has accused Norquist and ATR of misleading the IRS. In March 2012, the watchdog claimed that ATR failed to report to the IRS more than $2 million in political spending in 2010. (The group told the FEC it spent $4.2 million on independent expenditures, but it told the IRS its political outlays were just $1.85 million.) Neither the Justice Department nor the IRS has responded to CREW’s 2012 complaint.

Nor is the ATR the only political group facing questions about its tax filings. The Center for Public Integrity recently reported that an anti-Obama nonprofit with ties to the Koch brothers, the American Energy Alliance, told the IRS it engaged in no “direct or indirect political campaign activities on behalf of or in opposition to candidates for public office” in 2012. Yet the group spent more than $1 million on TV ads in Virginia and Ohio last fall urging viewers to “vote no on Obama’s failing energy policy.” An American Energy Alliance spokesman said the ads were in no way political, but Marcus Owens, a former IRS official, said the group’s tax filing “certainly raises a red flag.”