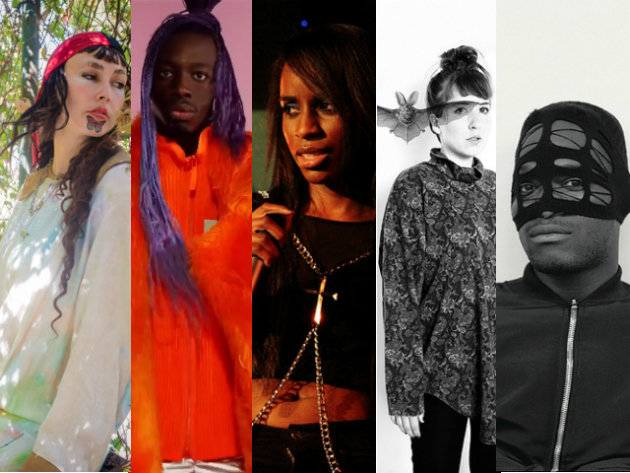 Turn on any commercial radio station or check out the popular music videos on YouTube, and even today the odds are slim that the music you will hear relates to a non-heterosexual relationship. Mainstream music, by and large, is all about straight love and sexuality, and representation of musicians who don’t identify publicly as straight is meager at best. To counter that trend, I put together this list of 10 queer artists worth checking out, talented musicians who aren’t afraid to be open about their sexuality in their music and in their public life.

Born in 1991, Angel Haze has been on every up-and-coming-rapper list since releasing the EP Reservation in 2012, and the song “Werkin’ Girls” was named one of Pitchfork Media’s 100 Best Tracks of 2012. This year, Haze released a poignant cover of Macklemore’s “Same Love,” in which Haze raps about personal experiences with love and homophobia. Haze is direct about sexuality and identifies as “pansexual…If you can make me feel, if you can make me laugh—and that’s hard—then I can be with you. I don’t care if you have a vagina or if you’re a hermaphrodite or whatever.” The 22-year-old’s debut album, Dirty Gold, is set to drop in January 2014. Above is a peek of the song “Echelon (It’s My Way),” released this past October.

In 2011, Austra released its debut album, Feel it Break, to critical acclaim. This past June, the Toronto band, fronted by Katie Stelmanis (whose middle name is the band’s namesake), dropped its second studio album, Olympia, featuring the operatic single, “Home.” In a 2011 interview with ‘Sup Magazine, Stelmanis said that she identifies as queer because “it encompasses gay, lesbian, trans…” She told the website After Ellen that she’d always wanted to be in a gay band. “I’d like to say being gay means being gay and being in a band, but most of my bandmates are gay and we’ve never really had that classification…it probably has to do with the fact there are a lot of stereotypes of what a gay band—particularly lesbian-identified band—should sound like, and we don’t really fit in with those stereotypes, which is confusing.”

Le1f (pronounced leaf) is the stage name of Khalif Diouf, who gained recognition for producing tracks for Das Racist, including the hit “Combination Pizza Hut and Taco Bell.” He broke out as a solo artist last year, and immediately got noticed for the song “Wut.” This year, Le1f took to Twitter to call out Macklemore over “Same Love,” tweeting: “News just in: Gay people don’t care about your video about gay people.” He released two mixtapes in 2013: Tree House and Spa Day, and his EP Hey is expected to drop in 2014. His rap is subversive, playful, and great.

The sister duo has been around since 2004, and Tales of a GrassWidow, released this year, is their fifth studio album. CocoRosie’s music has gotten mixed reviews from the start, and many critics are turned off by what they see as its “repellence” and “perversity.” For others, it’s exactly this alterity that’s so attractive. Their first album, La Maison de Mon Rêve, used children’s toys for sound effects. Bianca (Coco), often performs in drag, and her childlike voice raps eerily over her sister’s operatic melodies. The New York Times wrote that CocoRosie’s “waifishness is an extreme political stance, a way of countering everything from consumer capitalism to the war in Iraq to environmental collapse.”

New Jersey-based rapper Cakes Da Killa, who released his second mixtape, The Eulogy, this past January, has been widely recognized as an emerging artist in the genre of LGBT hip-hop. According to Pitchfork, “Cakes is maybe the closest thing hip-hop has right now to a Lil Kim figure, a raunchy-ass bitch who absolutely owns being a raunchy-ass bitch.” He told Interview Magazine that if he had it his way “I’d change people’s priorities. They’re worried about gay marriage…It’s all about the white gay prerogative…I’m not queer. I hate that word. It’s not in the black community. I like ‘cunt.'”

Mykki Blanco, the female side of Michael Quattlebaum, released her first mixtape, Cosmic Angel: The Illuminati Prince/ss last year, and the media attention has never stopped. Her iconic song, “Wavvy,” released last year, put her at the forefront of New York’s transgender music scene, and she continues to be outspoken about her identity and her art. Her dark, Marilyn Manson-inspired rapping is exemplified in her second EP, Betty Rubble: The Initiation, which dropped in June 2013.

THEESatisfaction is a Seattle-based duo composed of rapper Stasia “Stas” Iron and singer Catherine “Cat” Harris-White. Partners in both their personal and professional lives, Stas and Cat met at the University of Washington in 2008 and have been creating what they describe as “funk-psychedelic feminista sci-fi epics with the warmth and depth of Black Jazz and Sunday morning soul, frosted with icy raps that evoke equal parts Elaine Brown, Ursula Rucker and Q-Tip.” They released two mixtapes this year, And That’s Your Time and THEESatisfaction Loves Erykah Badu, after dropping their first studio album, awE naturalE, last year.

This past April, after a seven year hiatus, the Knife, a Swedish sibling duo with their own record label, released their fourth studio album, Shaking the Habitual. Amoeba Music put it at the top of its “50 Essential Albums Released in 2013” list, calling it “sprawling, conceptual, yet immensely thrilling.” “I guess the feminist and queer theory that we’ve been reading and studying over the last few years,” they told Spin magazine, “has helped us understand what we formerly felt, and find the words to understand political structures.”

It’s fair to say that before 2012, Zebra Katz was on no one’s register. But after the fashion designer Rick Owens played Katz’s song “Ima Read” on repeat at a show in Paris, the rapper jumped to near-instant fame. Katz is the stage name of Ojay Morgan, who left his job at a catering company after recording “Ima Read” to try his luck in the music business. He told the Guardian he identifies as “black, queer and ‘other,'” and that “creating a strong, black, other, queer male is something that really needed to happen because you don’t see that that often, especially not in hip-hop.” This year he released the mixtape DRKLNG, featuring several music videos and Katz’s characteristically minimalist raps.

Last but not least, Tegan and Sara, the most senior of all the musicians in this list, having been an act since 1995. The identical twin duo released their first studio album in 1999, and their seventh, Heartthrob, this past January. They’ve won countless awards and transitioned from alternative indie rock to full-fledged pop, epitomized by the single “Closer.” The sisters are openly lesbian, and are active in the fight for marriage equality.