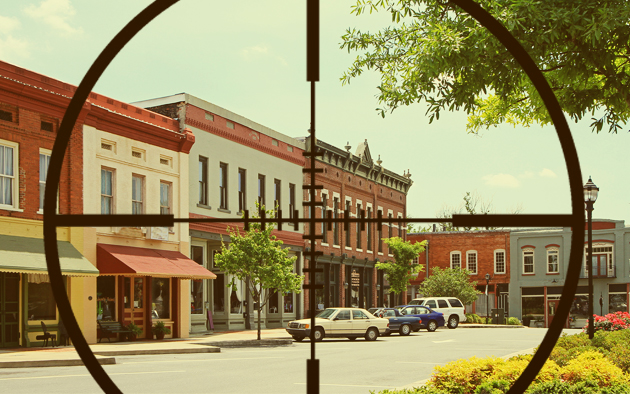 This past spring, strangely similar pieces of mail started arriving at the offices of city attorneys in 28 Maryland communities. The tersely worded letters, many dated March 26, warned each town that some of its firearms laws were illegal and needed to be repealed immediately. Takoma Park’s letter claimed that ordinances against carrying unlocked guns and possessing or selling guns in public places “grossly” exceeded state law and should be taken off the books, “out of respect for the rule of law.” All of the letters warned that failure to comply would put the towns “at risk for a lawsuit.”

“Once in a blue moon we get these kinds of letters from activist organizations,” says Ryan Spiegel, vice president of the Montgomery County chapter of the Maryland Municipal League and a member of the Gaithersburg city council. What felt different this time, he says, was the coordination—and the timing: Just a month earlier, the Maryland Senate had passed some of the country’s toughest gun control measures in the wake of the Sandy Hook Elementary School massacre.

The letters came from the Second Amendment Foundation, a prominent pro-gun legal-defense organization, as part of a quiet but mounting campaign to strike down local gun laws across the country. So far, SAF has sent out about 425 letters to cities, towns, and counties in Maryland, Oregon, Virginia, and Washington and has announced plans to target hundreds more local laws.

Though they may be obscure and not always enforced, local gun laws have become low-hanging fruit for anti-gun-control activists since Sandy Hook. The strategy rests on the legal concept of “preemption,” which restricts local lawmakers’ authority to regulate firearms beyond what’s in state law. For more than 30 years, the National Rifle Association and other pro-gun groups have successfully lobbied for preemption laws nationwide: In 1979, 7 states had them, but today, 45 do. Some states, such as Alabama, Idaho, and Maine, make exceptions for local restrictions on when and where people can shoot; some, like California, let localities control where and how guns are sold. All of them, however, set some limits to municipalities’ ability to regulate guns, and that’s where the Second Amendment Foundation comes in.

SAF sent out its first batch of letters in fall 2012, mostly to towns in its home state of Washington. It quickly got results: In Stanwood, the city council repealed two 40-year-old laws—one that prohibited carrying a concealed pistol without a permit, and another that gave the mayor additional control over guns in the case of a civil emergency. The city attorney in Prosser concluded that the contested law “could potentially be defended” but recommended changing it “to avoid litigation.” The repeals have been rolling in: In 2013, at least four local governments in Maryland repealed or weakened their gun laws, as did at least four towns in Washington and one in Oregon. And SAF isn’t the only group invoking preemption. In November, residents of Sunnyvale, California, passed a measure that bans magazines with more than 10 bullets and requires gun owners to lock up their weapons. The NRA plans to challenge the measure, which it claims is preempted by state law.

“They were just casting a broad net and trying to get as many folks as they could to remove language related to gun control from the books.”

The prospect of a costly court battle has daunted some communities. “When you’re in a little town, you don’t want to be the test case on things,” says Dan Hultgrenn, the city attorney of Connell, Washington, which repealed a law that prohibited carrying a gun while consuming alcohol.

Not every community has rolled over, though. “We would certainly entertain any request on modifying town code brought in by concerned citizens,” says Russell Winch, a town commissioner in Walkersville, Maryland. “But I’m not going to take any action for somebody on the West Coast that threatens to sue if we don’t do something to suit their needs. If this group doesn’t have the manners to show up before us and explain their position, then it’s not something we’re going to pay mind to.” After the town’s attorney found that the local code complied with Maryland law, Walkersville’s commissioners voted unanimously to disregard SAF’s warning. “I don’t think we even wrote back,” Winch says.

When Garrett Park, Maryland, received its letter, Mayor Peter Benjamin called up Mayors Against Illegal Guns, the Michael Bloomberg-backed gun control coalition that he and more than 1,000 mayors belong to. “I said, ‘Look. Most of the small municipalities in Maryland are going to have a hard time should the Second Amendment Foundation try to take any steps against us.'” MAIG agreed to help out if Garrett Park was sued. Benjamin says he hasn’t heard anything further from SAF.

Officials in four other Maryland towns also concluded that SAF is on shaky legal ground, since Maryland’s preemption law lists several exceptions. For instance, SAF called out Walkersville’s entire gun ordinance, which includes a ban on shooting within town limits, even though state law lets towns “regulate the discharge of handguns, rifles, and shotguns.” “Our impression was that whoever read our [town] code did not do a very thorough job,” Winch says. “They were just casting a broad net and trying to get as many folks as they could to remove language related to gun control from the books.” SAF spokesperson Dave Workman disputes that his group is taking a shotgun approach. “If a local ordinance is in conflict with a state statute, there’s not a lot of wiggle room there,” he says.

Both SAF and the NRA argue that navigating a maze of local gun laws is confusing: You can’t expect gun owners to read the municipal code every time they cross a town line. However, it appears that some of the ordinances SAF has targeted have rarely, if ever, been used to prosecute gun owners. So why target them? “In many cases, laws are designed to set a tone and to provide guidance on the expectation of behavior,” Benjamin explains. “During the 17 years since I was first elected mayor, we have never issued a single speeding or parking ticket, yet people seem in general to obey our traffic and parking control laws. Would it make any sense to repeal those laws because we have not prosecuted anyone under them?”