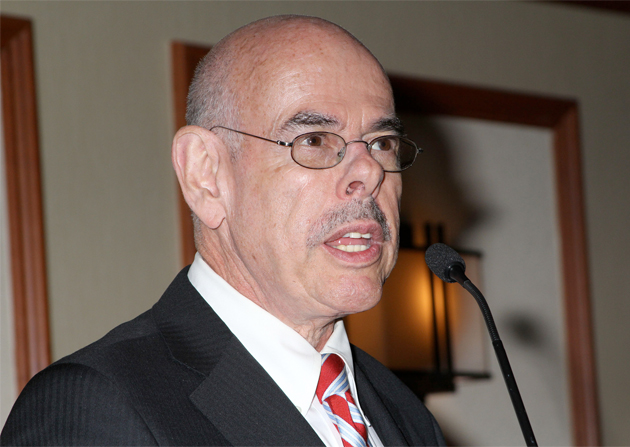 The news on Thursday morning came as a shocker to the politerati: Henry Waxman is retiring. This Democratic congressman from Los Angeles has been a Capitol Hill fixture and progressive crusader for decades, since he was first elected in 1974. He vigorously pursued Big Tobacco and enthusiastically championed climate change legislation. He’s been a fierce advocate for consumer rights, health care, and the environment. As the Washington Post notes, Waxman, 74 years old, has passed measures “to make infant formula safer and more nutritious (1980), bring low-priced generic drugs to market (1984), clean the air (1990), provide services and medical care to people with AIDS (1996), and reform and modernize the Postal Service (2006). He was also instrumental in the passage of the Affordable Care Act.” In 2005, I wrote a profile of Waxman that dubbed him the “Democrats’ Eliot Ness.” Here are some excerpts:

It’s nothing new, says Representative Henry Waxman. For decades—literally—this Democrat from the Westside of Los Angeles has mounted high-profile investigations and hearings while churning out sharp-edged reports: on toxic emissions, the tobacco industry, pesticides in drinking water. But during George W. Bush’s first term as President, Waxman, the senior Democrat on the Government Reform Committee, established himself as the Democrats’ chief pursuer of purported wrongdoing within the Bush Administration. He has mounted a series of “special investigations”—of Halliburton, Enron, the flu vaccine crisis, conflicts of interest at the Department of Homeland Security, national missile defense. He has produced reports on secrecy in the Bush Administration, misleading prewar assertions made by Bush officials about Iraq’s WMDs, Bush’s politicization of science. And he has won considerable media attention for his efforts. Working with Representative John Dingell, he sicced the Government Accountability Office on Vice President Dick Cheney’s energy task force to get the names of the industry executives who helped cook up Cheney’s energy plan. (Cheney told the GAO to take a hike; the GAO filed suit, lost and then declined to appeal.) More recently, Waxman released a headlines-grabbing report revealing that federally funded abstinence-only sex-ed programs peddle false information to teens. (One claimed condom use does not prevent the spread of sexually transmitted diseases.) With all this muckraking, the 65-year-old Waxman has become the Eliot Ness of the Democrats.

“Waxman has been important for House Democrats,” says Representative Jim McGovern, a liberal from Massachusetts. “With the Republicans controlling the White House and Congress, it’s hard to be heard. He’s found ways to get our message out.” Representative George Miller, the senior Democrat on the Education Committee, notes, “He’s developed the model. It’s what we would like every ranking member to do—to ask questions, be persistent and not accept silence. He’s motivated other Democrats and has even created some discontent within the Democratic caucus because newer members on other committees sometimes don’t think the ranking members are aggressive enough.” And on the Senate side, Democrats–perhaps encouraged by Waxman’s example—have announced they will create their own investigative team and conduct unofficial hearings on alleged Bush Administration wrongdoing.

The snub-nosed, bespectacled, balding and far-from-tall Waxman is not flamboyant or flashy. He speaks softly but directly and has a forceful manner. His Democratic colleagues routinely joke about his persistence and tenacity. “Don’t get into an argument with Henry,” says Miller. “But if you do, bring your lunch. He won’t let you go.”

The piece noted that Waxman had assembled a substantial history of legislative accomplishment:

Through most of Waxman’s first twenty years in Congress, he chaired the influential Health and Environment Subcommittee and mainly focused on legislation—Medicaid expansion, the clean-air law, AIDS, tobacco—winning a description in The Almanac of American Politics as “a skilled and idealistic policy entrepreneur.” During those years, Waxman says, producing reports was primarily a device for drawing attention to an issue and building a case for legislation. For instance, after the 1984 disaster at a Union Carbide chemical plant in Bhopal, India, he and his staff, realizing that toxic air pollutants were unregulated in the United States, investigated the pollution from chemical plants in Kanawha Valley, West Virginia. The resulting report concluded that the valley was being exposed to high amounts of toxic emissions. With that report in hand, Waxman pushed through legislation that required the Environmental Protection Agency to collect more data on emissions. He then used the information gathered to win passage in 1990 of a measure that reduced toxic air pollution.

And I reported that Waxman was not reluctant to take on Democrats—or seek compromises with Republicans:

Working with other Democrats, Waxman notes, has not always been easy. Through the 1980s, he engaged in a now-legendary clash with John Dingell, then the powerful chairman of the Energy and Commerce Committee and a protector of the auto industry, over clean-air legislation. Finally, the two hammered out a deal that led to the 1990 Clean Air Act. In 2003 Waxman proposed setting up an independent commission to investigate Bush’s use—or abuse—of the intelligence on WMDs in Iraq. But senior Democrats who deal with intelligence issues would not join him. “More and more,” he says, “I am happy to do things on my own.”

Waxman has been characterized by the right-wing media as a partisan hack only interested in nipping at Bush’s heels. But with no opportunity to legislate, there’s little alternative for him but to focus on oversight. And Waxman has not always acted as a partisan pitbull. In the mid-1990s he spent two years privately concocting a tobacco bill with Republican Representative Thomas Bliley, a champion of the tobacco industry. The two reached a compromise, Waxman says, but the GOP House leadership rejected the measure. During the Clinton campaign finance scandal, Waxman called for Attorney General Janet Reno to appoint a special counsel. “We were not happy with that,” says one former Clinton White House aide. Later Waxman assailed Clinton for pardoning fugitive financier Marc Rich.

Waxman did vote to grant Bush the authority to invade Iraq. He now says, “If I knew then what I know now, I wouldn’t have voted for it.” He points out that two days before the invasion he sent a letter to Bush noting that Bush’s use of the unproven allegation that Iraq had sought uranium in Africa was an act of “knowing deception or unfathomable incompetence” that undermined Bush’s case for war. Waxman was on to the Niger story months before it became big news, but his charge that Bush had peddled misinformation—or disinformation—received little notice in the United States.

Waxman has a safe seat; he handily wins re-election. His anti-Bush endeavors play well in Hollywood. Without having to fret about re-election, he can afford to exercise what Schiliro cites as one of his chief assets: patience. “He doesn’t mind spending eight years working on an issue,” Schiliro says. “He passed AIDS and clean-air legislation, and that took years.” And that may be why, when I ask Waxman if he will be able to remain motivated for another four years of Bush battles, he simply shrugs his shoulders. With four more Bush years to come, Waxman says, he expects to stay the course: more investigations, more reports. On what he’s not sure, but he does say he anticipates continuing his probes of government contracting. “I hope we can investigate this with the Republicans,” he comments. “This isn’t partisan; it involves protecting taxpayer dollars. And there’s been a clear failure of oversight by the Republicans. If they won’t join us, then we’ll just have to get the information out to the public.” But, he adds, “it’s hard for the Democrats to be as mean and tough as the House Republican leadership.”

His retirement won’t mean much in terms of raw politics: His seat is in a reliably safe Democratic district. But it will be a great loss for those who care about clear air, clean water, health care, economic fairness, and much more. Waxman was the ideal House member, skilled in politics and passionate about policy, able to legislate and investigate, and driven by principles rather than ego. He is one of the more—if not the most—effective House member of the past 40 years. You may even be alive because of him.