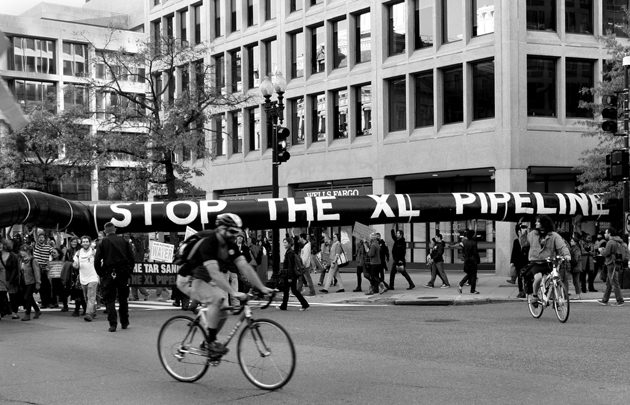 The decision on whether or not to allow construction of the Keystone XL pipeline, which would transport crude oil from the Canadian tar sands to the Gulf of Mexico, has always been President Obama’s to make. But the environmental stakes are so high—leading climate scientist James Hansen is fond of referring to the pipeline as “game over for the climate” because it would promote the extraction of one of the dirtiest kinds of oil—that a decision has been delayed for the last few years as the State Department carries out a review of the project’s likely environmental impact.

That wait ended today, as State released its Final Supplemental Environmental Impact Statement. The report says the annual carbon emissions from producing, refining, and burning the oil the pipeline would move (830,000 barrels per day) would add up to 147-168 million metric tons of carbon dioxide equivalent per year. (By contrast, the typical coal-fired power plant produces 3.5 million metric tons of CO2 annually.) That sounds like a lot, but the report comes with an important caveat:

Approval or denial of any one crude oil transport project, including the proposed Project, is unlikely to significantly impact the rate of extraction in the oil sands or the demand for heavy crude oil at refineries in the United States.

In other words, according to the report, those emissions are likely to happen whether the president approves Keystone XL or not. That’s an important distinction, given that President Obama has already said that in order to gain approval, the pipeline must not increase carbon emissions. But there are other ways to move oil: For example, the report mentions that “rail will likely be able to accommodate new production if pipelines are delayed or not constructed.” Rail transit is already underway; yesterday an ExxonMobil exec said the company had begun to use trains to pack oil out of the tar sands (despite their pretty awful safety record). But if the oil is going to be extracted (and the emissions emitted) one way or another, the case for blocking the pipeline per se becomes less clear.

There’s still one more important document yet to be released by State: an investigation by the department’s internal Inspector General into a potential conflict of interest by a contractor who helped produce the report, Environmental Resources Management. As Mother Jones first reported, State Department officials took steps to conceal that some ERM employees had ties to companies that would profit from the pipeline’s construction. Last December, Congressman Raul Grijalva (D-Ariz) led a coalition of House members who asked the president to delay release of the environmental impact statement until after the Inspector General’s report is released, which is not expected for several more weeks.

Still, all signs point to a final decision—one that will likely form the basis of Obama’s climate legacy—sometime before the summer. But the game isn’t over yet. Before Obama finally signs off (or not), there a few next steps: