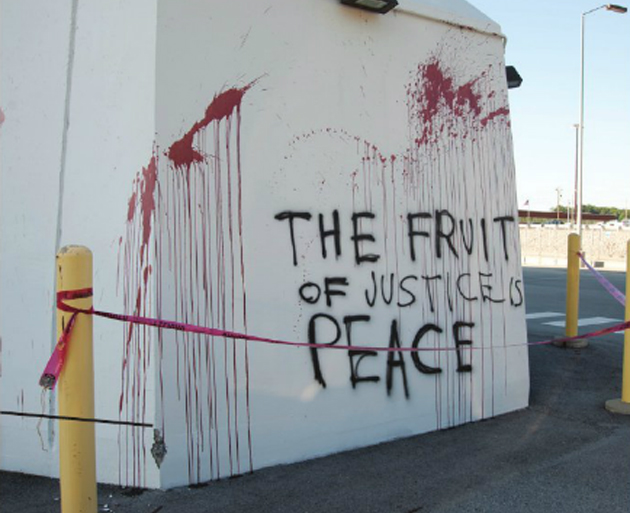 Later this month, Megan Rice, an 83-year-old Catholic nun, could be sentenced to up to 30 years in prison for breaking into Tennessee’s Y-12 Nuclear Security Complex and splattering the walls of a weapons-grade uranium warehouse with human blood. That may sound pretty far out—the blood, but also the stiff potential sentence and the notion of an octogenarian breaching a high-level nuclear facility guarded by machine guns and tanks. In any case, the symbolic spilling of blood isn’t all that unusual, especially for Rice’s fellow Christian peace activists in the Plowshares Movement.

“The blood could be seen as a surrogate for the blood of Christ…and its pouring could be interpreted as a symbolic act of Christian purification.”

“We use real human blood frequently in these kinds of actions,” says Paul Magno, who spent nearly two years in federal prison in the mid-1980s for breaking into a Pershing missile factory in Orlando, Florida, where he spread blood on missile-launcher parts. “It means terror and bloodshed if these things are ever used, and even if they are not, because we are taking so much of humanity’s future to just sustain an arsenal.”

According to a paper by Barnard College religion professor Elizabeth Castelli, the first documented use of human blood in an anti-war protest was on October 27, 1967, when four men entered the Baltimore Customs House and poured a mix of their own blood and animal blood on Vietnam War draft files.

One of them, Tom Lewis, became a lifelong peace activist. He died in his sleep in 2008 and and was cremated, but not before his comrades extracted and froze some of his blood for use in one final action. In July 2012, it was thawed and placed into eight baby bottles, which Rice emptied onto the walls of the Y-12 uranium unit.

The radical Catholic priest Philip Berrigan, who also took part in the Baltimore draft protest, initially rejected the blood idea as too “bourgeois” and “tepid,” according to his biographers. But he eventually came around, and began to elaborate a theological interpretation: “The blood could be seen as a surrogate for the blood of Christ, he envisioned, and its pouring could be interpreted as a symbolic act of Christian purification—a kind of echo of the sacrifice of the Mass.”

In 1980, Berrigan and his brother, Daniel, launched what would become the Plowshares Movement when they entered a General Electric nuclear weapons plant in King of Prussia, Pennsylvania, poured blood on documents, and hammered the nose cones of two Mark 12A warheads—a symbolic reference to the Biblical verse Isaiah 2:4: “And they will hammer their swords into plowshares.” Since then, hammering on weapons and pouring blood have been the hallmarks of Plowshares actions.

The movement’s activists apply a range of interpretations to the use of blood as a protest tool. “We bring our life symbols: blood, for healing and pouring out our lives in service and love,” Rice and her accomplices Michael Walli and Greg Boertje-Obed wrote in a statement explaining their actions. “Our very humanity depends on lives given, not taken. But blood also reminds us of the horrific spilling of blood by nuclear weapons.”