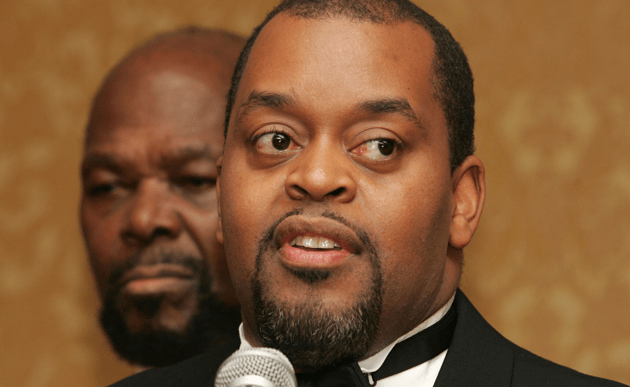 Niger Innis, a tea party activist who filed papers to run for Congress in Nevada last week, is best-known for filling up the conservative airwaves with race-inflected denouncements of the Obama administration. Last February, as the president mounted new gun control efforts, Innis said, “For black Americans, we know that gun control…sprouts from racist soil—be it after the, or during the infamous Dred Scott case where black man’s humanity was not recognized.” In October, Innis appeared on Neil Cavuto’s Fox News show to decry food stamp assistance in the farm bill. “The slaves had food stamps, too,” he said. “It was called ‘scraps from Massa’s table.'”

Innis, who announced in mid-January that he is running for Congress, has always had this flair for hyperbole. When he kicked off his campaign for the Republican nomination in Nevada’s sprawling fourth district last week—if chosen, he will challenge first-term Democratic Rep. Steven Horsford—Innis cast himself as an outsider waging war on “go-along, get-along Republicans.” But only recently has the 45-year-old gained very much name recognition, with most of that star power owing to his role as a sound-bite-ready strategist for TheTeaParty.net. “[Innis] has not been active in Republican politics until recently, clearly as a prelude to his congressional run,” says Jon Ralston, a longtime Nevada political reporter and commentator. “Today he’s this aggressive media hound…Nobody in Nevada could have told you who Niger Innis was a year ago.” Indeed, Innis maintained a much lower profile in the job that preceded his tea party work: spokesperson for the Congress of Racial Equality (CORE), a civil rights legacy institution which helped organize the 1963 March on Washington and the Freedom Rides.

But if the average Nevadan would not have known who Innis was one year ago, the average environmental activist certainly would have. Before he was a Fox News go-to, Innis spent a decade-plus as the face of various anti-environmentalist campaigns paid for by the country’s largest energy corporations. These campaigns deployed an unusual line of attack against environmental activists: rather than simply arguing that climate change fears were overblown or insupportable, Innis’ campaigns accused green groups of pushing policies that devastated the poor—particularly poor blacks.

Innis made those accusations mainly through his work with CORE, which his father, Roy Innis, has controlled since 1968. CORE swung hard to the right under the leadership of the elder Innis (who is on the National Rifle Association’s board of directors). Its many pro-business campaigns have moved prominent civil rights figures to accuse CORE of renting out its reputation to any corporation that will pay. One frequent CORE patron was ExxonMobil. Using data from Exxon’s annual giving disclosures, Greenpeace calculated that CORE received more than $300,000 from Exxon—some of which was earmarked for “climate change outreach efforts”—from 2003 to 2008.

During that time period, Innis teamed up with or founded several groups to push for greater domestic energy production. He frequently characterized environmentalists as elitist or the remnants of “the anarchists, socialists, communist types of the 1960s.”

A representative sample of Innis’ message can be seen in video taken by Right Wing Watch, a website that tracks conservatives, in 2008. Innis had convened a press conference with CORE and Americans for American Energy, a non-profit group financed by an energy lobbyist, to launch a campaign titled “Stop the War on the Poor.” In his remarks, Innis proclaims the fight to allow drilling in places like the Arctic National Wildlife Refuge to be “very much like the civil rights revolution in its diversity and in its moral passion.” A representative of Americans for American Energy dinged green activists as “environmental racists.”

“We must stop trying to protect our planet from every imaginable, exaggerated or imaginary risk. And we must stop trying to protect it on the backs, and the graves, of the nation’s and world’s most powerless and impoverished people. If people of conscience join us, we will challenge and end this scourge of eco-imperialism, and ensure that Dr. Martin Luther King’s dream will become a reality for poor people throughout the United States and world.”

In fact, the victims of pollution that environmental campaigns aim to protect are disproportionately poor. Landmark environmental achievements, such as the Clean Air Act, have been shown to have a negligible impact on American household energy prices—while bringing about billions in health care savings. Nonetheless, by 2010, Innis increased his activism with another pro-energy group, the Affordable Power Alliance, and under that banner appeared before tea party rallies around the country. In its founding manifesto, leaders of the Affordable Power Alliance blamed environmental activists for the deaths of multitudes of poor Americans. “Thousands of Americans become sick and die each year because high energy costs that prevent them from adequately heating or cooling their homes, buying the medicines they need, and practicing better health prevention measures,” it read.

Innis and his campaign did not respond to requests for comment about his past advocacy work. But on January 17, Innis appeared on Ralston’s talk show and spoke about his work with energy interests.

In theory, Innis’ transparent arrangement with companies such as Exxon poses a problem for the political outsider strains of his nascent campaign. When he officially kicked off his run, Innis boasted that his political team “is not made up of Carson City elites or the princes of power of this state.” He declined to mention the literal power princes who paid a portion of his salary for the better part of the last decade.

But Nevada is a state where the term “Republican establishment” has ceased to mean very much. “Beyond [Gov. Brian] Sandoval and [Sen. Dean] Heller, the Republican party here is in disarray,” says Ralston. “And I am using disarray in the most generous way possible.” Ralston says Innis’ televisual verve, and the fact that his most likely primary opponent, state Assemblyman Cresent Hardy, is neither as charismatic nor as convincing on federal issues as Innis, will probably trump any difficulties Innis has in playing the outsider.

And that’s lucky for Innis. In the congressional district where he’s running, 85 percent of votes come from urban, Democratic areas like the city of North Las Vegas. Horsford’s seat is one of those that Republicans could dream of taking only in a midterm election when the president is suffering in popularity—and even then, only if the Republican establishment is willing to put up substantial dough. So by the time Innis launched his congressional exploratory committee in November, supporters had already circulated invitations for a committee fundraiser which guests would pay a minimum of $500 to attend—co-chaired by Republican megadonors Sheldon and Miriam Adelson.