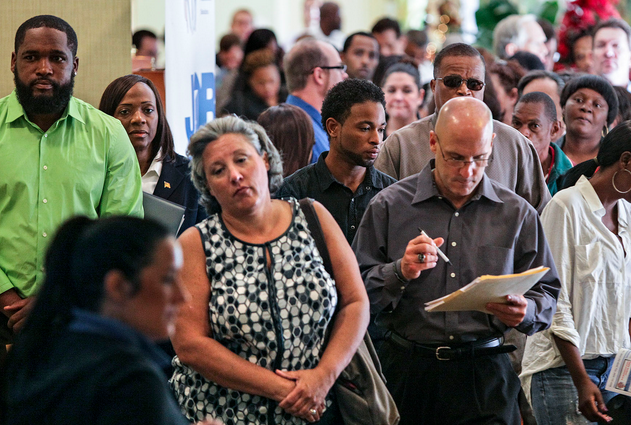 It has been almost a month since Congress let emergency unemployment benefits expire for 1.3 million Americans. Since then, Republicans and Democrats have bickered about how to reinstate these benefits, with little progress—a comprehensive unemployment bill recently failed in the Senate, and similar measures in the GOP-run House haven’t even gotten a vote. Harry Reid, the Democratic Senate majority leader, has promised to press the issue when lawmakers return from recess next week. But until Congress comes to some sort of agreement, unemployed Americans will have to wait.

Shortly after Christmas, we spoke to seven Americans who were set to lose their benefits. We checked back with a few of them this week to ask how their situations have changed. We’ve also collected a few new stories—some directly, and some from other news outlets. Many of these people quoted here have chosen to remain anonymous so as not to damage their job prospects. Their responses have been condensed and edited for clarity.

Name: Anonymous (previous story here)
State: New York
“I hate to acknowledge it or admit it, as that seems to make it seem more real, but it is getting worse by the day. I am relying on money from relatives for necessities like heat, gas, food. I have simply stopped servicing any of my debt. It’s a miserable feeling. The calls are coming daily.  I was approved for food stamps in the month of November, but in December, my benefits were greatly reduced. [See more on reduced benefits here.] My ex is providing some help, for example, paying the co-pay for our son’s diabetic supplies. Because my youngest is diabetic, with an allergy to peanuts, cheaper staples like pasta, white bread, rice, and peanut butter are not an option for us. The other three boys eat pasta all the time, but we cannot have peanut products in the house. I did not get the job I interviewed for and of course driving to/from the interview cost quite a bit. But I have at least a dozen resumes out just today. And we have heat, access to health care, relatives who will take us in, and I’m well educated. I’m in much better shape than most, I suspect. Something will happen soon and this will all be a nasty little memory.”

Name: Heidi S.
State: Michigan
“I am 45 years old. I got divorced three and half years ago while I was self-employed. I wasn’t making enough money to support myself, but I also couldn’t find a good job, because I didn’t finish my bachelor degree years ago. So I went back to college and took out loans for the whole thing. (I now owe more than $40,000.) I graduated with my degree in professional writing and journalism in December 2012. In February 2013, I realized that there weren’t that many decent jobs in this field where I live, so I freelanced a bit while looking for a job and still collecting unemployment. I finally started to make enough to perhaps get off unemployment when I fell and broke my wrist and ankle in July 2013. Because of this, I couldn’t do anything for two months. I lost the new clients I had found and couldn’t pay my rent. I was also uninsured, so I now I have medical bills over $2,500. In September, 2013, I was evicted and ended up moving into my parents’ summer cottage for the winter. I’ve been applying for 5-10 jobs each week, for the last two years. I’ve been told I am either too qualified or not qualified enough.

“When I had unemployment, I was able to put gas in my car and pay rent, utilities, and insurance. Now I cannot. I’m also running low on dog food, laundry soap, toilet paper, and things like that, which aren’t covered by food stamps. I haven’t bought any new clothes in more than three years, so my interview and work clothes are seriously outdated.? I was able to pay my phone and internet bills for this month, but I’m worried how I will pay for both next month, without the unemployment. Without a phone or internet, I’m not sure how I will be able to find a job. The nearest library with computers is 20 minutes away.“

Name: Anonymous? (previous story here)
State: Washington
“I’m lucky to have skills that can bring in some freelance income.? I had already cut back many discretionary costs when I lost my job and was getting benefits. What’s left now are mostly my fixed costs, so there’s not much more I can cut. I don’t have cable, but need my internet + DSL for job hunting. Still, I’m luckier than many. I am not in danger of losing my house or my car anytime soon, and at least I have long-term savings I can tap, even though I am loath to borrow from my future. My closest friends check in often and are very supportive. I have enough to eat and so does my dog. I am putting off a (not major) surgery she needs, though. A tooth started to ache yesterday. If I need a root canal, there goes another $2,000 I can’t afford! Things feel precarious. After this many months, it gets harder to resist the stigma and harder to resist believing that there must be something really wrong with me, or I would have found work by now. I saw the first crocus blooming in my yard yesterday. It’s a new year. Spring will come, and with it, a change in my circumstances, I hope!“

Name: Tara Dublin (previous story here)
State: Washington
“Unfortunately, I’m still in the exact same place. I’m very worried about losing my house, I still apply for waitressing and retail jobs and all the other jobs I feel I could do, and I get no response. I’m incredibly terrified and frustrated. Right now I’m deciding if I should pay the power bill or buy gas for my car.”

?Name: Anonymous
State: Illinois
“I’m a skilled technician in my thirties—just a few credits shy of my undergraduate degree from the University of Chicago—and I live with my brother to make ends meet. I worked as an office manager/IT professional after college, and then switched jobs in 2012. I ended up having a micro stroke that I was subsequently fired for. I was on emergency unemployment benefits from May to December. If I didn’t sell drugs, I’d be dead. I sell weed primarily, but I will buy and sell anything. I’m looking to go back to school, but I will need more loans, and medical bills have been eating me alive. Luckily I have the support of friends and family. And I’m industrious, connected, and safe enough to have an illegal job, yet still make money (and am constantly being told I’m the most professional drug dealer they’ve ever met). I’m trying to get that money to be legal, but, baby steps.”

Here are a few stories from other news outlets:

Lena Rouse, Ohio: “I have zero income right now, zero…This is the first month things haven’t been paid yet.” (WOSU)

Stan Osnowitz, Maryland: “I have two choices…I can take a job at McDonald’s or something and give up everything I’ve studied and everything I’ve worked for and all the experience that I have. Or I can go to retirement.” (Politico)

Kerstin Foster, Connecticut: “I’m one of the lucky people who has a job coming. What’s going to happen to all the rest?” (CNN)

Clarissa Garcia Jewett, Florida: “You go from it being bad to being dire” (National Journal)

Amber Chatman, Texas: “I mean, I’m down to the basics. I don’t have a fancy new car. I have my rent, my utilities, to provide a roof over me and my son’s head.” (Kera News)