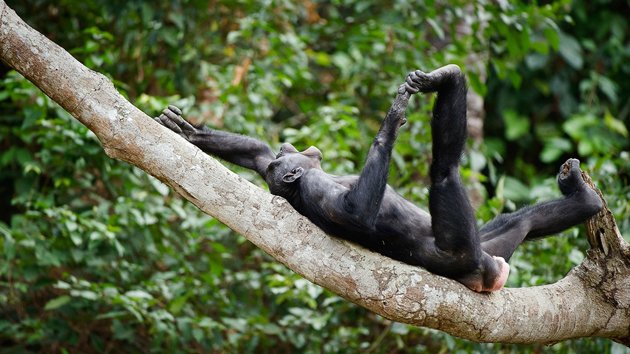 Earlier this month, just before the famed creationism debate between Bill Nye and Ken Ham, I published an article drawing attention to a stunning piece of evidence in favor of the theory of evolution—one that terrifies creationists. The article received so much attention that a follow-up seemed in order; after all, there’s much more where that came from. The evidence in question emerges from the field of genetics, the realm of science that, above all others, makes the case for evolution irrefutable through its ability to quantify the precise degree of interrelatedness between organisms by comparing their genetic codes.

So what does genetics tell us about evolution? Not just that organisms that are more closely related to one another share more DNA—precisely as they should—but also that there is, in effect, a missing link inscribed in the human genetic code. The telltale evidence involves human chromosome 2, which was formed by the ancestral fusion of two smaller chromosomes after we diverged from orangutans, gorillas, and chimpanzees. The image below, which Mother Jones created based on two National Center for Biotechnology Information (NCBI) images of the human and chimpanzee genomes, shows this plainly. As you can see, while our genome is very close to that of chimpanzees overall, chimps have two smaller chromosomes, labeled 2a and 2b by NCBI, where we have simply chromosome 2. 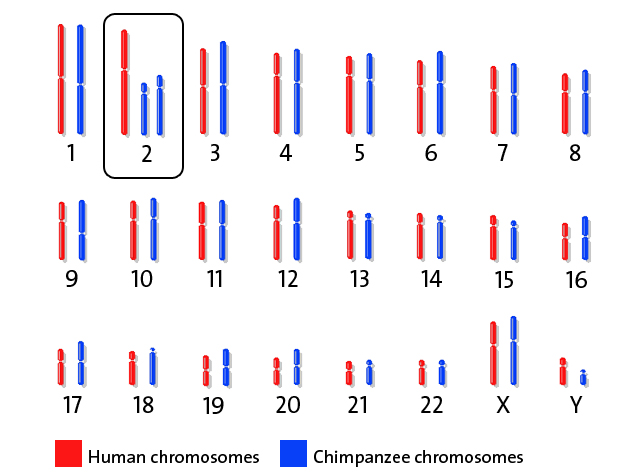 The chromosomes of humans and chimpanzees, aligned for comparison After National Center for Biotechnology Information/Matthew Connolly of Mother Jones

The genetic evidence that this fusion event occurred is overwhelming: Scientists can identify the precise fusion site on our chromosome 2, and they can also show the presence of certain sequences of DNA in locations on the chromosome where they shouldn’t be unless the fusion story is true. A fusion event, in effect, leaves an indelible genetic imprint of its occurrence, and that imprint has been documented down to the DNA base pair. (For a more thorough explanation, see here.)

In fact, this chromosomal evidence for evolution, and for common ancestry (which, after all, is what evolution really boils down to), is even stronger than I let on in my last article. That article centrally focused on chimpanzees, gorillas, and orangutans, all of which have 24 chromosome pairs in each of their cells compared with humans’ 23 chromosome pairs, because there was no chromosome 2 fusion in these other species. In just the past few years, however, recent advances have allowed scientists to sequence the genomes of three other close relatives of modern humans (either still alive or now extinct) that either have, or lack, a fused chromosome 2.

And once again, the new evidence confirms the evolutionary story. Why? Because it turns out that you find a fused chromosome 2 precisely where you would expect to find it if evolution is true: Namely, in organisms more closely related to us than chimpanzees, but not in species just as distant from us as chimps are. Let’s consider these organisms:

Bonobos: No chromosome fusion. Exhibit A is the bonobo, the endangered, notoriously amorous ape whose genome was recently sequenced by a vast team of researchers led by Kay Prüfer of the Max Planck Institute for Evolutionary Anthropology in Leipzig, Germany. Bonobos and chimpanzees are “the closest living relatives of humans,” the study notes; while our lineage diverged from both bonobos and chimps more than 5 million years ago, the two species diverged from one another only about 2 million years ago. Accordingly, the chimpanzee and bonobo genomes are 99.6 percent identical to one another, reports the study, while the bonobo and human genomes are only 98.7 percent identical. (Yup, that means that even creationists share the vast majority of their DNA with this peaceful ape, known for forming female-dominant social groupings and using sex, rather than violence, to resolve conflicts.)

If humans are just as closely related to bonobos as they are to chimpanzees, then bonobos, just like chimpanzees, should have 24 chromosome pairs overall, and should lack the chromosome fusion seen in humans. And they do. Based on the appearance of their chromosomes, “it is clear that Bonobo has two separate chr2a and chr2b,” writes the Planck Institute’s Kay Prüfer by email. In fact, the NIH’s National Center for Biotechnology Information displays the bonobo genome with a chromosome labeled 2a and another labeled 2b:

Thus, the evidence from the bonobo’s genome once again affirms the evolutionary story.

Neanderthals: Chromosome fusion. But that’s just the beginning of the new evidence. One of the most stunning stories in recent evolutionary genetics involves the finding that some of our ancestors occasionally interbred with the now extinct Homo neanderthalensis, perhaps some 100,000 years ago in the Middle East. As a result, modern Europeans and Asians have a genome comprised of between 1 to 4 percent Neanderthal DNA.

Since modern humans and Neanderthals diverged relatively recently in evolutionary time (somewhere between 550,000 and 765,000 years ago, according to a recent estimate), it stands to reason that unlike chimpanzees, bonobos, gorillas, and orangutans, Neanderthals would have had a fused chromosome 2 and 23 chromosomes pairs overall, just like modern humans do. And we now know that they did. 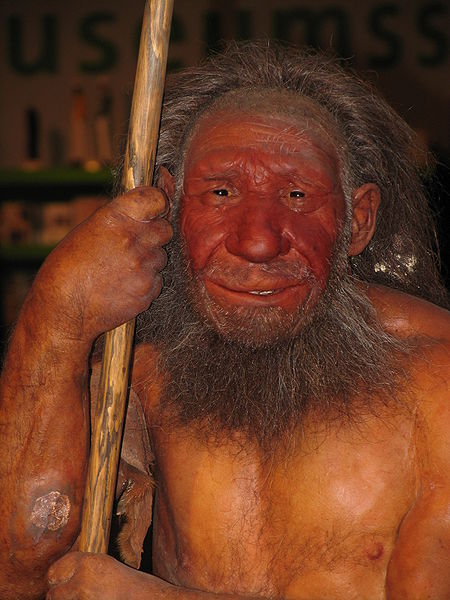 Reconstruction of a Neanderthal, at the Neanderthal Museum in Germany. Stefan Scheer/Wikimedia Commons

Earlier this year, Nature published a full sequence of a Neanderthal’s genome, based on genetic information derived from a toe bone discovered in the Denisova cave in Siberia. The supplementary information to the paper notes that “the chromosome two fusion is present in Neandertals,” adding that the telltale DNA signature is there: “chromosome two shows a short stretch of telomeric repeat sequence in forward and reverse direction in the interior of the chromosome.” Telomeric DNA is normally found on the ends of chromosomes, not in the interior. But if an end-to-end fusion occurred to create chromosome 2, then you would expect to find it in the interior of the chromosome. And sure enough, there it is.

Denisovans: Chromosome fusion. But the evidence grows stronger still: the Denisovans, another hominin species that seems to have diverged from Neanderthals after we did (between 445,000 and 473,000 years ago, according to a recent estimate), have now also been studied genetically. People living today in New Guinea owe nearly 5 percent of their DNA to Denisovans, meaning that they, too, must have interbred with our ancestors. And sure enough, the genetic research shows that Denisovans also had a fused chromosome 2. In the supplementary materials to a paper published in Science in 2012 sequencing a Denisovan genome, the “chromosome two fusion site” is again discussed, and the paper notes that “the fusion event must predate the split of Denisova and modern human.”

So in sum: Genetic evidence shows clearly that while orangutans, gorillas, chimpanzees, and bonobos have 24 chromosome pairs, humans and our closest extinct ancestors (Neanderthals and Denisovans) have 23. And we know why that is: In modern humans and these other hominins, chromosome 2 shows clear genetic evidence of a fusion event that must have happened after our lineage split from chimpanzees and bonobos, but before our divergence with Neanderthals and Denisovans. The proof is right there in the DNA.

Faced with this, those who call themselves creationists are in a pretty uncomfortable position. Their bodies’ own cells prove them wrong.