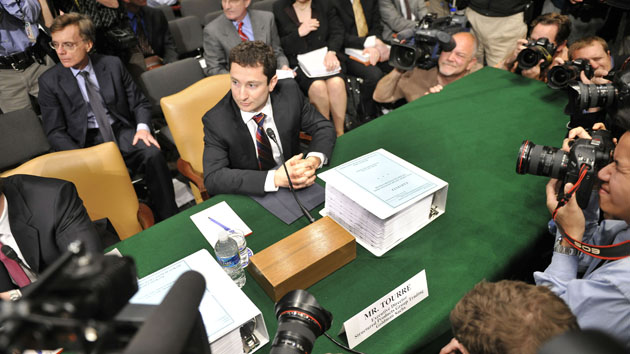 Fabulous Fab appears at a Senate hearing in 2010.Xinhua/ZUMA

Update, March 3, 8:30 p.m. EST: Fabulous Fab won’t be teaching a course at the University of Chicago after all. “As preparations continue for the Spring Quarter, Fabrice Tourre will no longer be assigned as an instructor for Honors Elements of Economic Analysis in the College,” the college said in a statement. “Instead he will be able to fulfill the teaching requirements for his Ph.D. program through opportunities in his department’s graduate-level curriculum.” The news was first reported Monday night by The Chicago Maroon, the student newspaper at the school.

The lone individual found liable for committing fraud during the lead up to the financial crisis will soon be teaching undergrads the basics of economics at one of America’s most prestigious universities. Former Goldman Sachs banker Fabrice Tourre—better known by his self-assigned nickname, “Fabulous Fab”—is studying to get his Ph.D. in economics from University of Chicago. Per the Chicago Maroon, the school’s student newspaper, Tourre will teach a class this quarter, offering honors students the opportunity to learn “Elements of Economics Analysis 3” from a man who owes over $1 million in fines to the Securities and Exchange Commission.

Tourre is a poster child for Wall Street malfeasance. While working at Goldman in 2007, he designed a financial product called Abacus 2007-AC1. This collection of mortgage-backed securities was designed to fail—hedge funder John Paulson had asked Goldman to sell a package of bad mortgages that he could then bet against. Thanks to Tourre and the foreclosure crisis, Paulson made a cool $1 billion. Fab and Paulson knew Abacus was a bum product from the get-go, but Tourre hid that information from investors. Goldman rewarded Tourre handsomely for the scheme: He was promoted and earned a reported $2 million.

After the crash, though, the deal came under scrutiny. Congress summoned Tourre and other Goldmanites for hearings to examine the causes of the crisis, and Fab drew widespread media attention when emails he sent to his girlfriend became public. The emails showed Tourre boasting about how he had hoodwinked investors. Here’s an excerpt:

The emails raised the ire of the SEC, which sued Goldman and Tourre for fraud. The agency settled with Goldman for $550 million in the summer of 2010, but the deal didn’t include protection for Tourre. (Goldman has been covering his legal fees, though). Last year, a federal court found Tourre liable for six counts of civil securities fraud. The fines totaled $1 million, an amount he’s currently contesting. Although the ruling was a victory for people who wanted to see Wall Street pay for the financial crisis, it was a minor win—Tourre, who was 28 when he helped create Abacus, was only a midtier employee at Goldman.

Tourre did not respond to a request for comment Thursday afternoon. But last April he granted the Wall Street Journal a glimpse into his life as an average grad student. He was captain of an undefeated intramural soccer team, cheering his teammates on from crutches after an injury. He tutored fellow classmates. But the remnants of his former life of decadence linger. He lives in a high-rise apartment with a scenic view of Lake Michigan and a uniformed guard at the entrance.

The course guide for the class Tourre will be teaching describes it as “an introduction to macroeconomic theory and policy.” There’s no word on whether dreaming up crappy new financial products to sell to unwitting investors will be on the syllabus, too.