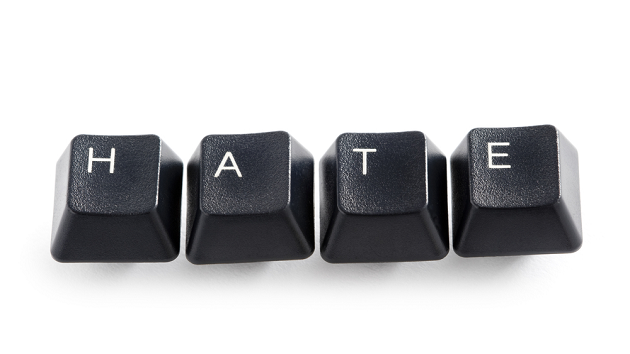 In the past few years, the science of Internet trollology has made some strides. Last year, for instance, we learned that by hurling insults and inciting discord in online comment sections, so-called Internet “trolls” (who are frequently anonymous) have a polarizing effect on audiences, leading to politicization, rather than deeper understanding of scientific topics.

That’s bad, but it’s nothing compared with what a new psychology paper has to say about the personalities of so-called trolls themselves. The research, conducted by Erin Buckels of the University of Manitoba and two colleagues, sought to directly investigate whether people who engage in trolling are characterized by personality traits that fall in the so-called “Dark Tetrad”: Machiavellianism (willingness to manipulate and deceive others), narcissism (egotism and self-obsession), psychopathy (the lack of remorse and empathy), and sadism (pleasure in the suffering of others).

It is hard to underplay the results: The study found correlations, sometimes quite significant, between these traits and trolling behavior. What’s more, it also found a relationship between all Dark Tetrad traits (except for narcissism) and the overall time that an individual spent, per day, commenting on the Internet.

In the study, trolls were identified in a variety of ways. One was by simply asking survey participants what they “enjoyed doing most” when on online comment sites, offering five options: “debating issues that are important to you,” “chatting with others,” “making new friends,” “trolling others,” and “other.” Here’s how different responses about these Internet commenting preferences matched up with responses to questions designed to identify “Dark Tetrad” traits: 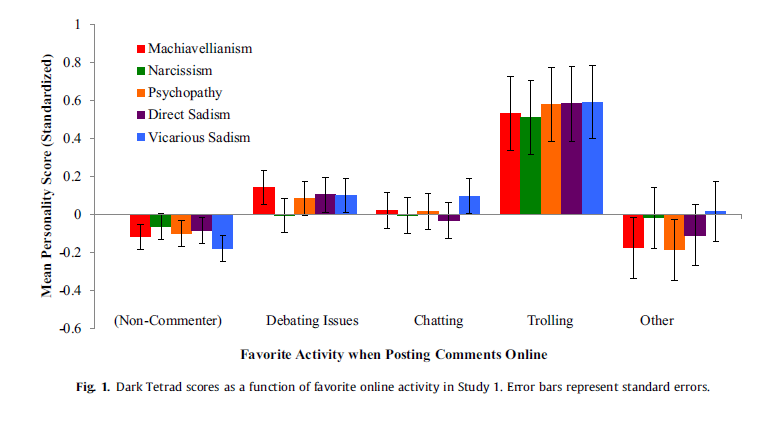 To be sure, only 5.6 percent of survey respondents actually specified that they enjoy “trolling.” By contrast, 41.3 percent of Internet users were “non-commenters,” meaning they didn’t like engaging online at all. So trolls are, as has often been suspected, a minority of online commenters, and an even smaller minority of overall Internet users.

The researchers conducted multiple studies, using samples from Amazon’s Mechanical Turk but also of college students, to try to understand why the act of trolling seems to attract this type of personality. They even constructed their own survey instrument, which they dubbed the “Global Assessment of Internet Trolling” or GAIT, comprised of the following items:

I have sent people to shock websites for the lulz.

I like to troll people in forums or the comments section of websites.

I enjoy griefing other players in multiplayer games.

The more beautiful and pure a thing is, the more satisfying it is to corrupt.

Yes, some people actually say they agree with such statements. And again, doing so was correlated with sadism in its various forms, with psychopathy, and with Machiavellianism. Overall, the authors found that the relationship between sadism and trolling was the strongest, and that indeed, sadists appear to troll because they find it pleasurable. “Both trolls and sadists feel sadistic glee at the distress of others,” they wrote. “Sadists just want to have fun…and the Internet is their playground!”

The study comes as websites, particularly at major media outlets, are increasingly weighing steps to rein in trollish behavior. Last year Popular Science did away with its comments sections completely, citing research on the deleterious effects of trolling, and YouTube also took measures to rein in trolling.

But Erin Buckles of the University of Manitoba, the study’s first author, actually isn’t sure that fix is a realistic one. “Because the behaviors are intrinsically motivating for sadists, comment moderators will likely have a difficult time curbing trolling with punishments (e.g., banning users),” she commented by email. “Ultimately, the allure of trolling may be too strong for sadists, who presumably have limited opportunities to express their sadistic interests in a socially-desirable manner.”