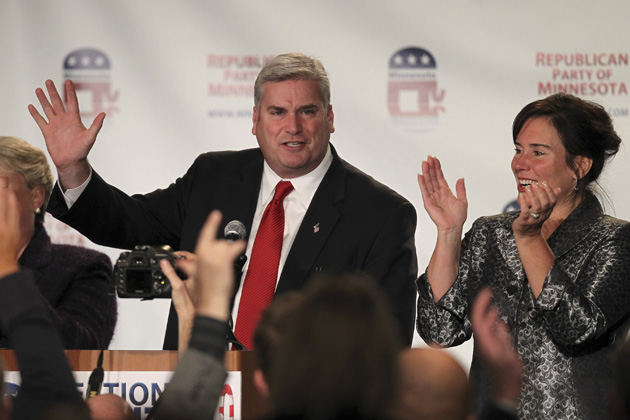 Liberals rejoiced when Michele Bachmann announced her intention to retire from Congress at the end of 2014. Bachmann will no longer be around to carry the tea party banner in Congress. But she’s almost guaranteed to be replaced by another far-right conservative. Minnesota’s 6th District skews heavily Republican—voting 56 percent for Romney in 2012. Whichever GOPer emerges from the primary should easily waltz to a general election win in November. And that successor could either be a Bachmann clone or Minnesota’s own version of Grover Norquist.

The race is between two candidates from diverging wings of the Republican Party: There’s Tom Emmer, the social conservative who hews closely to Bachmann, and Phil Krinkie, a small-business owner whose mission in life is to block tax increases. A key vote for the nomination comes this week. Minnesota’s primary isn’t until August, but candidates are traditionally handpicked at summer conventions by the state party, while the primary is a mere formality. Local precincts will hold caucuses on Tuesday to elect delegates to the state convention, determining which candidate has the edge.

Emmer, a failed gubernatorial candidate from 2010, closely replicated the Bachmann model. For his first major bill after he entered the Minnesota House in 2005, Emmer proposed that the state medically castrate sex offenders. That was just the beginning of a career defined by extreme views. He’s unsure when quizzed about evolution. He favors harsh immigration laws—Arizona’s punitive 2010 law was a “wonderful first step.” He thinks a minimum wage for restaurant staff is a silly concept: “With the tips that they get to take home, they are some people earning over $100,000 a year,” Emmer said during his 2010 campaign.

Exempting Minnesota from federal laws was Emmer’s pet cause as a legislator. He proposed the Firearms Freedom Act, an implausible bill that would have declared Minnesota exempt from federal gun laws. He then took that a step further, introducing a bill that said Minnesota must ignore any federal law unless a supermajority approved each measure. “A federal law does not apply in Minnesota unless that law is approved by a two-thirds vote of the members of each house of the legislature and is signed by the governor,” his bill read. None of these measures succeeded, but they charmed the Bachmann wing of Minnesota’s Republican Party.

Despite that track record, his national reputation centered on his staunch anti-LGBT views during his 2010 campaign. He had been at the forefront of pushing amendments to the state constitution banning same-sex marriage and palled around with Bradlee Dean, a Christian radio host know for praising countries that execute gay people. When Target donated $150,000 to a pro-Emmer PAC (Best Buy and 3M—other Fortune 500s based in Minnesota—also chipped in) in 2010, LGBT groups rallied against the donation and launched a boycott of Target, which later apologized for the donation.

Emmer should be the front-runner for the nomination after reaching statewide notoriety during his run for governor. But his failure in that race left a bad impression among many Minnesota Republicans. He lost to Democrat Mark Dayton, a politician previously known for his truly inept single term in the US Senate, in a year primed for a GOP win (the party gained majorities in both houses of the state Legislature that year). When Emmer ran for one of the state’s slots on the Republican National Committee the following April, he failed to even make it off the first ballot.

His main opponent might present an appealing alternative for a state Republican Party trying to repair its image after major losses in 2012. Phil Krinkie, a fellow former House member, is equally conservative but emphasizes a different agenda. Where Emmer is the descendant of Jerry Falwell, Krinkie takes his cues from Grover Norquist—with his obstinate opposition to tax increases. (A third candidate, Anoka County Commissioner Rhonda Sivarajah, has struggled to raise money and lacks Krinkie and Emmer’s statewide recognition.)

“Krinkie is from the first wave of the rote right-wing Republicans, the first wave of people who voted the party line no matter what. And Emmer is just pre-tea-party,” says Sarah Janecek, a lobbyist and Republican activist. “There really isn’t much difference between Krinkie and Emmer on the issues. This is more about personality, reputation, past history.”

Krinkie, owner of a heating and air conditioning business, served in the state House from 1991 to 2006. During that time he formed the Fiscal Conservative Caucus, a coalition of fiscal hawks who opposed any and all efforts to raise taxes. His nickname in the state capitol was “Dr. No.” He was a particular thorn in the side of former Gov. Jesse Ventura, at one point personally filing a lawsuit to block Ventura’s effort to expand public transportation. His biggest national media hit to date came in 2001, when Bryant Gumble interviewed him on CBS about Ventura’s decision to announce XFL games.

Krinkie lost his seat in 2006 to a Democratic challenger by a scant 55 votes. But in 2007 he became president of the Taxpayer’s League of Minnesota, a group that mirrors the model of Norquist’s Americans for Tax Reform. The group gets legislators to sign pledges against raising taxes. “They were really the organization that drove the no new taxes line, and if you do raise taxes we will get rid of you,” says Janecek. But the Taxpayers League does more than offer basic encouragement on resisting tax increases: It also keeps Republicans in check on a whole host of conservative ideals. Beyond tax increases, its 2013 scorecard ranking legislators include demerits for lawmakers who supported bills that allowed child care providers to unionize, votes to implement health care exchanges in the state, and environmental studies.

Krinkie ran for this same congressional seat in 2006 but lost the nomination to Bachmann. “Between Krinkie and Bachmann, the claim can be made that the race now features both the Legislature’s most fiscally conservative and socially conservative members,” Minnesota Public Radio said when he entered the race. Last time the GOP sided with the social wing. After eight years of Bachmann and Emmer’s embarrassing run for governor, the fiscal side might win out.