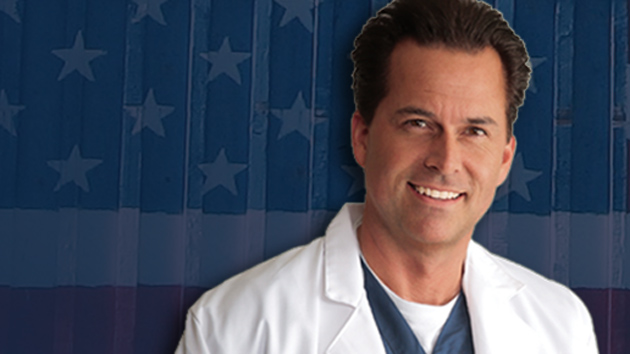 Milton Wolf is a tea party Republican in Kansas challenging incumbent conservative GOP Sen. Pat Roberts because he believes Roberts is not sufficiently conservative. He has equated President Barack Obama’s treatment of successful Americans to Hitler’s treatment of Jews and gypsies. He has compared Obama to a “less despotic” Benito Mussolini. The catch: Milton Wolf is Obama’s cousin.

In interviews with Fox News and other conservative outlets, Wolf insists he has the utmost respect for the president, with whom he shares a male ancestor, Thomas Creekmore McCurry—Obama’s great-great-grandfather and Wolf’s great-grandfather. Although Wolf has only met the president once, he told Fox News three years ago his family is proud of what “Barack” has accomplished and wants to see him succeed. But more recent comments reveal a rhetorical extremism and rigid ideological opposition that would be at home within the most excessive circles of the far right.

On his public Twitter account, @miltonwolfmd, Wolf has directly compared Obama and his party to Adolf Hitler and the Nazis. “Other than killing Jews, what domestic policy of the Nazis do today’s American liberals oppose?” he asked in an exchange last spring. He went so far as to analogize Obama’s economic policy with the Holocaust a few months earlier: “Scapegoats of history: Hitler – Jews & gypsies. Mussolini – Jews & Bolsheviks. #Obama – Successful Americans. #tcot #p2 #gop.”

Wolf is the underdog in the primary contest against Roberts, an influential three-term senator. But Wolf has the backing of a prominent right-wing group, the Senate Conservatives Fund, and seven months to make his case. Roberts’ fortunes took a big hit last week when the New York Times reported that he no longer has a residence in Kansas, and instead has taken to sleeping on a friend’s recliner during his rare visits to Dodge City.

Wolf’s biggest asset among the tea party grassroots has been his family tree, which he jokingly refers to as “12 percent pure hope.” Since 2010, when he first appeared on Fox News’ morning show, Fox and Friends, to discuss his opposition to the Affordable Care Act, Wolf, a radiologist by day, has parlayed his blood ties to the president into a series of speaking engagements around the country, a column in the conservative Washington Times, and an e-book, First, Do No Harm: The President’s Cousin Explains Why His Hippocratic Oath Requires Him to Oppose ObamaCare.

With Wolf, blood is not thicker than politics. Last May, in a Washington Times column entitled “Tyranny in Our Time,” he cast his cousin as an example of the kind of despot Americans rebelled against in colonial days. “Americans are beginning to recognize the disturbing similarities between President Obama and the fallen Richard Nixon, but the comparison that may matter more is between Mr. Obama and King George III,” he contended. In a 2011 column, he wrote, “America rejected Mussolini’s brand of corporatism in the 20th century, and we should reject Mr. Obama’s less despotic brand in the 21st.”

Wolf charged his near-despotic cousin with abusing presidential power to silence him. “Mr. Obama’s White House urged my editor at this newspaper to drop me,” he alleged. “How dare the president’s own cousin criticize him! Credit the Washington Times for defending the Constitution against the White House’s attack on it.” After the IRS placed a hold on his tax returns for a few months, Wolf sensed foul play again: “The arbitrator could only say it was ‘very strange’ and ‘unusual.’ Indeed.”

In another column, he sketched out similarities between Soviet Russia, the Castros’ Cuba, and modern-day America: “Enforcement of collectivism has always depended on government power, from Stalin’s iron-fisted gulags to Mr. Obama’s mere heavy-handed plan for punitive fines for failure to purchase your government-imposed health insurance.”

Despite repeated fact-checks to the contrary, Wolf has repeatedly insisted that secret provision of the Affordable Care Act would impose end-of-life decisions on senior citizens. “Promises from the White House notwithstanding, Mrs. Palin indeed was right,” Wolf wrote in 2010. “Death panels are all too real, and no family deserves to be caught up in them. Granted, some may find the term ‘death panel’ unnecessarily provocative, but then again, what exactly should we call a panel whose decisions result in death?”

He has sounded the alarm about the New Black Panther Party (which he believed the Obama administration had given preferential treatment) and ripped into media outlets for covering up the truth about Florida teen Trayvon Martin. “Recent photos of Trayvon—the ones the media don’t want you to see but those Trayvon chose to identify himself—tell a sad story,” he wrote. “The once-smiling, baby-faced boy adopted a street ‘gangsta’ persona with gold teeth and tattoos. Tweeting under a racially inflammatory handle, Trayvon boasted of his descent into violence, misogyny, prostitution and drugs.”

In a statement to Mother Jones, Wolf defended the substance his previous comments on his cousin, but said he “should have chosen better words.”

“What I will not apologize for, however, is my undying belief that liberals are engaging in class warfare with the specific intention of harming successful Americans,” Wolf said. “The most consequential offender amongst American liberals is Barack Obama, who is using that class warfare to make the most dangerous and unprecedented power grab by a President in the history of our great nation. Mass surveillance, changing law on a Presidential whim, the government takeover of our healthcare, and government-run companies are just the beginning if brave Americans don’t stand up and fight the radical left.”

Wolf isn’t the first relative of a famous politician to turn against the family in public. Candace Gingrich-Jones, the half-sister of former Speaker of the House Newt Gingrich, endorsed Obama in 2011. Mary Cheney, the daughter of former Vice President Dick Cheney, recently slammed her sister Liz Cheney during Liz’s brief and failed Senate campaign for opposing marriage equality. Ron Reagan, son of the former president, became a Democrat who fiercely opposed his father’s policies.

Still, even with Roberts’ recent missteps, Wolf has a long way to go before he can join his cousin in Washington. He had merely $179,000 in campaign cash heading into the final six months before the primary. (Roberts has $2.2 million.) In the only poll that has been conducted for this race, he trailed Roberts by 44 points.

“I think I’m everything that’s wrong with Barack Obama’s America,” he told the conservative RedState Gathering last year. “I’ve got a wife, a job, and a gun.” But trailing in the polls with just a fraction of the campaign war chest of Roberts, Wolf may be the stuck with the job he has for the near future—La-Z-Boy or not. You know who else never owned a home in Kansas.