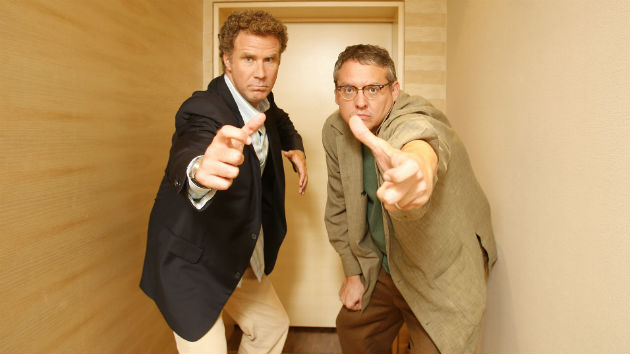 Writer/director Adam McKay is signed on to helm a film adaptation of journalist Michael Lewis‘ book The Big Short: Inside the Doomsday Machine for Paramount Pictures. The nonfiction best-seller examines the housing and credit bubble of the 2000s. “Michael Lewis has the amazing ability to take complex formulas and concepts and turn them into page-turners,” McKay said in a statement.

The 45-year-old director is best known for directing comedies such as Talladega Nights: The Ballad of Ricky Bobby and the Anchorman movies. The idea of him doing a housing bubble film might strike Ron Burgundy devotees as odd. But if you take more than just a quick glance at his career, it shouldn’t. “Adam McKay to Film ‘The Big Short,’ Which Makes More Sense Than You Think,” the Wire writes. Sure, his films have plenty of crude jokes and improvisational and (sometimes surreal) humor. But also he’s an intensely political person.

He’s a die-hard liberal and Democratic fundraiser. His comedy website Funny or Die has tried to help free an American jailed in the United Arab Emirates, and has worked with the Obama White House in attempting to educate people about the Affordable Care Act. McKay produced and co-wrote The Campaign, a 2012 political comedy, starring Will Ferrell and Zach Galifianakis, that is harshly critical of Citizens United and the Koch Brothers (a Koch spokesman actually fired back at the film and its star). The Other Guys, which McKay directed and co-wrote, is a buddy cop movie that doubles as a critique of our financial system and capitalist excess. Even his crude, non-political comedy Step Brothers begins with a dumb-sounding quote from George W. Bush.

McKay is outspoken on all sorts of issues. “So long as there are hack politicians who want to say ‘three strikes, you’re out,’ and come up with these slogans that are not thoughtful, [this isn’t going to stop],” McKay has said, slamming the failures of the drug war and the US prison system.

If the culmination of all this turns out to be a housing and credit bubble movie, then that totally makes sense. Which brings us to another one of McKay’s as-yet unrealized projects: His Lee Atwater movie. The late Atwater was the rollicking Republican strategist (and bluesman) who worked for Presidents Ronald Reagan and George H.W. Bush, and served as RNC chairman. He was infamous for essentially rewriting the book—or at least codifying the standards—on waging nasty, victorious political campaigns in the modern era. (Willie Horton, anyone?)

In 2010, McKay discussed the possibility of an Atwater project with MTV News, and mentioned that Edward Norton or Jim Carrey could be good picks to portray the GOP consultant. Here’s an excerpt:

But what draws me to the Lee Atwater story is the fact that he’s such a larger-than-life, massive, mythic American figure. He was a badass blues guitar player, and hilarious and charming, and had absolutely no moral center whatsoever. It’s a crazy story. I think it’s an opportunity for a great role for a big, powerhouse actor. There’s also no way you spend more than $10 million on that movie — probably we’re just getting $5 or $6 million. I like that too, which gives us a certain freedom. The final lynchpin was that we got Jesse Armstrong, who co-wrote In the Loop, which is one of my favorite movies. We’re getting a script written right now…Everything [Atwater] touched sort of changed the landscape of how leaders are elected in our country. And at the same time, there’s nothing preachy about our story. Lee Atwater is a great way to dig into how things have changed in a funny, disturbing way that’s not remotely preachy.

In June 2011, he went on HBO’s Real Time with Bill Maher and discussed the possible film, highlighting how Atwater was basically “the devil,” due to his dirty-campaign wizardry and charisma. This sounds like a great idea, and it would certainly fit into McKay’s recent demonstrated interest in more “mature” filmmaking. But who knows if or when we’d get to see the project come to life. McKay’s publicist tells me that Atwater is still “on the back burner,” and McKay obviously has his hands full at the moment.

Now check out the trailer for the 2008 documentary Boogie Man: The Lee Atwater Story: