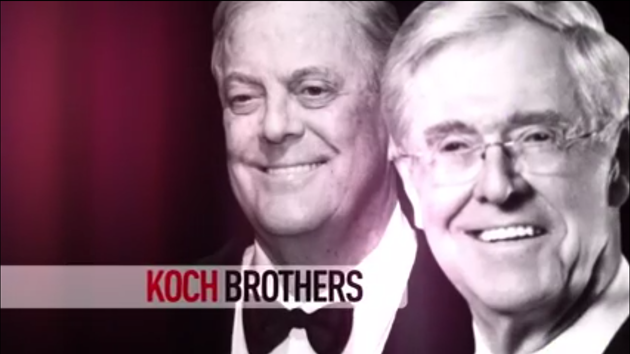 Screenshot from the Begich ad

Harry Reid (D-Nev.) has been bounding onto the Senate floor with a new vocation of late, one unrelated to passing legislation. The Senate majority leader has made it his personal mission to call out David and Charles Koch, the billionaire brothers who have bankrolled a massive infrastructure of conservative groups. He’s termed the brothers “un-American.” He’s accused his Republican colleagues of being bought and paid for by the Kochs. He’s said they are trying to rig the political system to benefit the wealthy. “The Koch brothers and other moneyed interests are influencing the politics in a way not seen for generations,” he said during one recent speech. (A spokesman for the brothers, meanwhile, has fired back at Reid.) Last week, the Democratic Senatorial Campaign Committee unveiled a website that denounces the brothers and blasts the GOP for being “addicted to Koch.”

What brought Reid to denounce two political donors on the Senate floor? The vast sums of money they and their political network are spending to unseat his Democratic colleagues and overturn their Senate majority, paving the way for a Republican takeover of Congress in 2014. For months, Americans for Prosperity, the advocacy group founded and partly bankrolled by the brothers, have blitzed vulnerable Senate Democrats with ads, spending some $30 million since last fall. Among the lawmakers in the advocacy group’s crosshairs are Sens. Mary Landrieu (D-La.), Kay Hagan (D-N.C.), and Mark Pryor (D-Ark.).

Sen. Mark Begich (D-Alaska) is AFP’s latest target and, taking Reid’s cue, he’s come out swinging. Begich, whose up for reelection in 2014, is facing a close contest according to early polls and AFP has hammered him with ads making dubious claims about his record.

Begich fired back in his own ad released Monday, which name-checks the Koch brothers and their advocacy group. The Begich spot slams past AFP ads for presenting a Maryland actress as an Alaskan voter and falsely claiming that Begich supported a carbon tax. His commercial then pivots to clips of Alaskans critiquing the Kochs for plowing money into an Alaska election. “I don’t go down and tell them what to do; I don’t expect them to come to Alaska and tell us what to do,” one person says.

The Kochs are already controversial in the state for reasons that have nothing to do with their politics. Last month, a Koch Industries subsidiary announced plans to shutter a refinery it operates in Alaska’s North Slope—a fact Begich’s ad latches onto. “They buy our refinery, just run it into the ground,” the ad says of the Kochs.