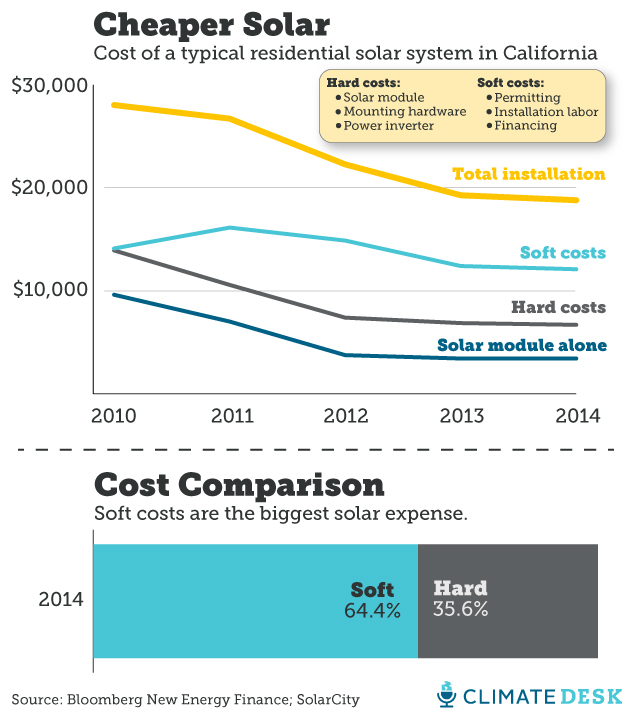 There was an era when putting solar panels on your roof was a time- and money-sucking hassle on par with remodeling your kitchen. But the cost of going solar has been dropping fast. The latest signal of the industry’s move into the mainstream came last week, when San Mateo, Calif.-based SolarCity* announced it would begin to sell solar systems out of Best Buy, alongside big-screen TVs and digital cameras.

“There are a lot of people out there with unshaded roofs, paying high electricity bills, who just don’t know this is an option for them,” said Jonathan Bass, SolarCity’s vice president of communications. The move into Best Buy “gives us a chance to have that conversation with more people.”

The company is the biggest installer in the country’s biggest solar market, California, a state that earlier this month broke its all-time solar power production record twice on two consecutive days, churning out enough electricity from solar panels to power roughly 3 million homes. Just since last summer, California’s solar production has doubled, according to the California Independent System Operator, which manages the state’s electric grid. There’s a lot more growth where that came from, Bass said.

At 60 Best Buys in the solar-heavy states of Arizona, California, Hawaii, New York, and Oregon, customers can sign up to have SolarCity equip their house with solar panels free of charge. SolarCity retains ownership of the panels; it sells homeowners the power they produce at a rate the company says is roughly 10 to 15 percent lower than the standard utility rate. Homeowners get cheaper, cleaner power, while the company makes money on the energy sales; excess power gets sold back into the grid. It’s a business model SolarCity has already used successfully at Home Depot, but Bass said it’s only recently that costs have gone down enough for the company to try to take a bigger bite out of what it sees as a market of millions of homes nationwide. (Only about 400,000 US homes have rooftop solar today).

Since 2010, the cost of a solar system for a typical mid-sized home in California has dropped by a third, from close to $30,000 to around $19,000 today, based on data from Bloomberg New Energy Finance and SolarCity, as the chart above shows. That makes it easier for companies like SolarCity to gather the up-front capital needed to invest in solar systems, and thereby allows them to offer the electricity at a competitive rate. SolarCity’s move into Best Buy is “a big deal,” said BNEF solar analyst Stefan Linder, because it signals a shift in how solar companies are able to pitch their panels to potential buyers.

“It used to be that you considered solar as a capital project,” like a major home renovation, Linder said. “But distributed energy companies have gotten good at marketing it as a consumer good” like any other piece of electronics.

Thanks to engineering and manufacturing advances, the biggest savings have come from declines in so-called “hard” costs: The panels themselves and the hardware used to mount them and send their power into the grid. Progress has been slower on ancillary “soft” costs: The cost of municipal building permits, for example, and installation labor. In 2010, the total cost of a solar system was about evenly split between soft and hard costs. Now, soft costs are the main expense, making up about 65 percent of the total. That’s in part because installers work under a complex patchwork of different state and city building laws, and also because in most cases the various steps in getting a solar system up and running—panel sales, installation, maintenance, financing, etc.—are handled by different companies.

In other words, the biggest roadblock to getting more solar on US rooftops has little to do with technology, and more to do with regulations and business operations.

SolarCity’s approach to that problem has been to gradually take over the full range of required services (“vertical integration,” to use the Economics 101 jargon), the same way Apple owns or directly manages everything from parts production to iPhone maintenance.

“Doing so enables us to drive out costs from that process,” said Tim Newell, SolarCity’s VP of financial products.

The need for the company to trim costs was highlighted on Tuesday, when the value of SolarCity shares dipped 1.4 percent after an announcement that losses for the current quarter would be deeper than expected.

Newell said the company is also preparing to offer a new product: Direct investment in solar projects. Until now, SolarCity has paid its up-front costs with money from some 40 big-time investors, including Goldman Sachs, Google, and Bank of America. That method has raised roughly $3 billion for 90,000 projects, but the company aims to grow its customer base to at least 1 million by 2018, Newell said.

“So you get a sense of the appetite for capital we’ll have,” he said.

By mid-year, individuals who are keen to hop on the solar bandwagon but can’t get panels themselves (if they live in a rented apartment or their roof is covered by trees, for example) will be able to invest in a fund that pays for the panels on other peoples’ roofs. Then they’ll receive a share of the profits from the electricity sales. With more investment up front, the systems can be even more cost-competitive, attracting more customers, and pushing solar even more into the mainstream.

*An earlier version of this story incorrectly said SolarCity is based in Oakland. We regret the error.