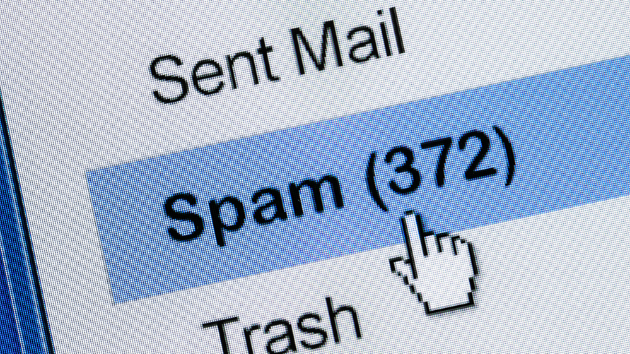 I just returned from a reporting trip to Nigeria, where I was traveling around the country talking to terrorism experts, nomadic cattle herders, and government officials about how global warming affects conflict in the country. I lucked out with an amazing fixer. As a newswire reporter focused on the terrorist group Boko Haram, he was able to provide crucial context for my story. But Michael* also grew up a “street boy,” meaning he was able to make fast friends in the slum villages and farming communities we visited. He put himself through college, and after working as a Nigerian soap opera actor and door-to-door men’s clothing salesman, he clawed his way into journalism. Before that, he used to hang out with nomadic cow-herding kids, children who sell bottled water by the roadside, and budding scam artists. Yes, Nigerian scam artists, like the ones who send you emails purporting to be from an African prince who will pay you to help him move $3 million into your country, and all you have to do is give him your bank account number. I told Michael I wanted to interview his scammer friends. He said there was no way that his dudes would talk for less than $600. Shocker. Of course, at Mother Jones we don’t pay for interviews. But I figured I’d be doing a public service by distracting the scammers from conning old folks for a couple hours. So I offered $100 for a rare glimpse at the human faces behind the syntax-challenged spam. We settled on $130, and off we went.

I sat down with Sheye and Danjuma* on the back patio of a fancy duplex in an upscale neighborhood in one of the country’s main cities, and the two dished on their craft, constantly interrupting each other as they downed bottles of Nigerian Star lager and chain-smoked. Though they lie for a living, Sheye insisted, “We are telling you the fact and the truth.”

Sheye and Danjuma have a name for the advance-fee email scams, in which victims agree to to send money to a stranger, banking on the promise of love or fast money. They called these cons “Yahoo” jobs, pronounced Ya-OO. 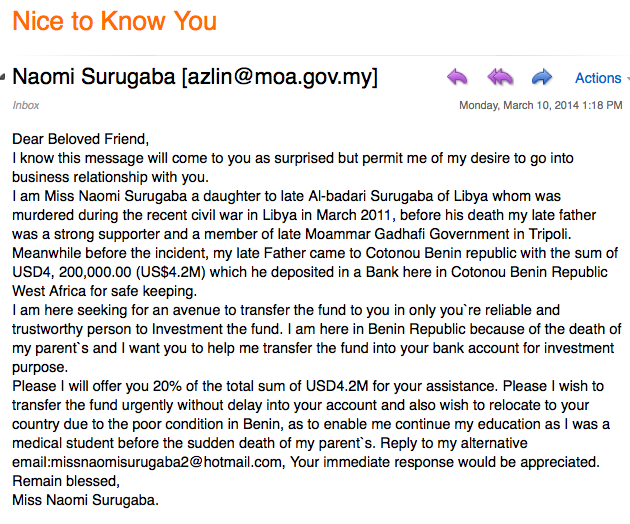 A scam email I received recently.

“We go on the internet…We start making friend with you,” Danjuma says, explaining that they trawl Facebook and dating websites incessantly, looking for lonely women with money to spare. He knows if he meets “a Saudi Arabia person,” he’s in luck. “They don’t know what to do with money.”

“Whenever we want to fraud somebody, we will know what you are worth,” Danjuma says. “Where are you working?” Even “how much you have in your account.” They glean all this information just by developing a tight relationship with the dupe. If the mark is worthwhile, the scammer works up “a level of trust,” Danjuma continues. “Maybe the person doesn’t have a husband, and the person is looking for a husband in Nigeria. Maybe…you need a black man,” he says, his down-sloping eyes very serious.

At that point, the scammer will start to “give [the victim] a process,” promising to come visit her, but asking for money to take care of a few things first: “My car has problem,” or “My father is in Italy. He did not send money for me.”

“Because you love me, then you say, ‘Okay,'” Sheye interrupts. “I go and withdraw my money. I keep on enjoying with my girls here.” He laughs wildly.

Over the past decade or so, the United States has cracked down on Nigerian Internet scams. Western Union, for example, would not allow me to wire my Nigerian fixer an advance portion of his pay because, the operator told me, I was likely the victim of fraud. Still, Nigerian fraudsters manage to dupe Americans into forking thousands of dollars over to complete strangers each year. In 2011, the FBI received close to 30,000 reports of advance fee ploys, called “419 scams” after the section of the Nigerian criminal code that outlaws fraud. The agency received over 4,000 complaints of advance fee romance scams in 2012, with victim losses totaling over $55 million. Nigerians aren’t the only ones committing international advance fee fraud, but nearly one-fifth of all such scams originate in the West African country. The scams often involve phony lottery winnings, job offers, and inheritance notices.

Ten years ago, Sheye and Danjuma, who are both in their mid-30s, say they could make up to 2 million naira—about $12,000—per Yahoo job, but the “US are very wise” now, Sheye says. They typically only make about $200 per “client” these days, though they know other scammers who still rake in millions of naira through the email schemes. “There is this boy in Kaduna [a city in northern Nigeria] who made over 2 million naira” last year on 419 scams, Danjuma says. “And he is not even 18.”

The two fraudsters make most of their money duping fellow Nigerians. (They insist that tricking people is not the same as stealing. “We don’t thief,” Danjuma says.) They told me about one elaborate scam, called Elawala (or “Let’s go” in Igbo, one of the languages spoken in Nigeria), that they occasionally pull on their countrymen. It involves a taxi cab, a “juju man,” magic charms, and a huge bag of cash (and it’s way too complicated to explain here). Another go-to scam involves a taxi cab, a French man, a locked box filled with gold, and very expensive pliers. (Ditto.) They asked to hire me out for a day for one of their cons because, they said, my white skin would bolster their credibility. “Black man believes that white man is reality,” Danjuma explains.

They make a tidy living. Sheye and Danjuma say they are each worth about $60,000, in a country where more than 70 percent of the population lives on less than $2 a day. They say they’d make a lot more than that, but they blow much of their income entertaining “clients” in order to convince the victims they’re legit. They’ll fly potential marks to Ghana, for example, and put them up in a fancy hotel while they meet with Sheye and Danjuma’s faux business partners there. Since Ghana is a less corrupt country, they say, victims are more likely to enter into a business deal with a Ghanaian than a Nigerian. The two say they own homes worth about a quarter million dollars each.

The Nigerian Economic and Financial Crimes Commission is tasked with cracking down on con men like these. So is Interpol. The duo says they are able to skirt law enforcement because they have a lot of people on their payroll. “They’re all criminals,” Danjuma explains. They estimate that 30 percent of their earnings go to what they call “security”—that is, the payment of bribes. “We are not scared of any minister or president,” Danjuma says, his words slightly slurred by the third 20-ounce bottle of Star. “We are not scared of him…Fuck him.”

They justify what they do by claiming that the highest levels of the Nigerian government are ridden with scammers. The fancy neighborhood where we meet backs up against a slum village. We take a stroll through it after the interview. The shack homes are constructed of used plastic cement bags tied to sticks. Feral dogs scamper around. A rivulet of garbage and water runs down the central dirt road.

“The money [the government] should have used to construct this road, they are using for personal use,” Sheye says. “That is why we are bad boys.”

*Not their real names.