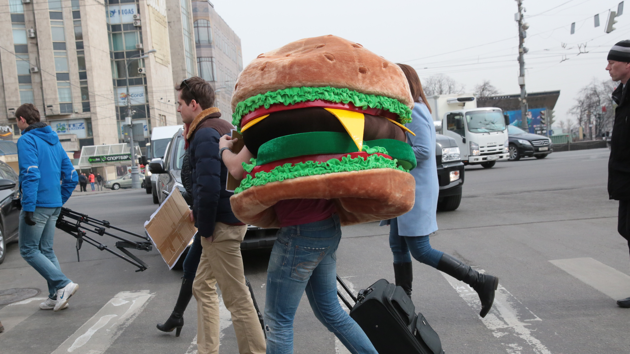 On Thursday, New York McDonald’s workers will stage a protest for better pay. It’s the latest effort in what has become a national movement aimed at increasing fast food wages—which average $8.69 an hour—to $15 an hour. The odds are steep, because the restaurant industry is dead set against it. A new report released Thursday details just how much power the restaurant lobby wields in Washington.

The National Restaurant Association (the other NRA), which lobbies on behalf of the $600 billion industry, has been fighting minimum wage hikes, paid sick leave, and food safety rules for decades. But over the course of the slow economic recovery, which has been characterized by a disproportionate increase in low-wage service sector jobs, the NRA sharpened its knives, more than doubling its lobbying force on the Hill. Between 2008 and 2013, the number of NRA lobbyists pushing the industry’s interests in Washington jumped from 15 to 37, according to the report, which was put together by the Alliance for a Just Society (AJS), a network of social justice organizations, and Restaurant Opportunities Centers United (ROCUnited), an organization that pushes for better conditions for food workers.

“The NRA has super-sized its investment in insider influence since 2008,” the report notes.

In addition to the lobbyists working on behalf of the NRA, nine of the association’s biggest members—including McDonald’s, Marriott, Walt Disney, and YUM! Brands—were represented in Washington by another 127 registered lobbyists in 2013, according to the report. That’s up from 56 in 1998.

The NRA, which represents 52,000 member companies, including KFC, Taco Bell, and Pizza Hut, has spent $2.2 million on lobbying since November 2012, and over $400,000 in campaign contributions, according to the Center for Responsive Politics.

The industry group has lavished much of its money on Republicans, who are digging their heels in against President Barack Obama’s calls for a federal minimum wage hike from $7.25 to $10.10. So far, in 2014, 73 percent of the NRA’s campaign donations have gone to Republicans. Since 1990, the NRA has given $10.5 million to GOP candidates, and $2.1 million to Dems.

Today, fast food workers in New York will attempt to counter that money with protest signs. And congressional Dems, including Senate majority leader Harry Reid (D-Nev.), and House minority leader Nancy Pelosi (D-Calif.), will hold a “Give America a Raise” rally on the Hill.