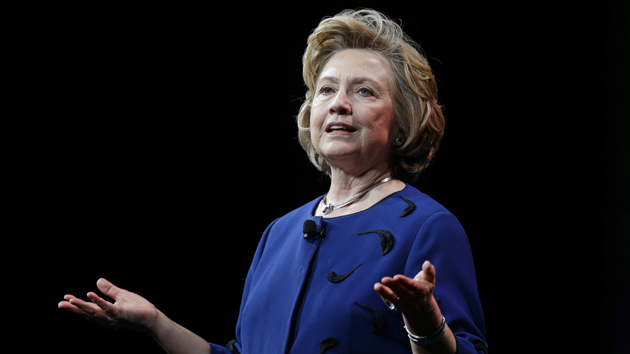 Former Secretary of State Hillary Clinton isn’t a fan of the Supreme Court’s recent penchant for eroding campaign finance law. At an event in Portland, Oregon, earlier this week Clinton joked that, if the conservative majority on the Supreme Court continues on its current path, all elections would soon be decided by a handful of wealthy benefactors.

“With the rate the Supreme Court is going, there will only be three or four people in the whole country that have to finance our entire political system by the time they are done,” she said, according to CNN, after being asked about the public perception of Congress. “Understand,” she added, “that you can be a liberal, you can be a conservative, but you want to vote for someone who understands, respects, and cherishes the Democratic process.”

Clinton’s critique of the Supreme Court was a clear reference to the justices’ ruling last week on McCutcheon v. Federal Election Commission. In that 5-4 decision, the court’s conservative justices tossed out the rules on aggregate limits—a total cap on the amount a donor can contribute to federal campaigns or political committees during a two-year window. While there are still limitations on donations to individual candidates, the big-time spenders are now free to cast a wide net and send money to as many candidates as they please. That decision builds off Citizens United, the marquee campaign-finance case of Chief Justice John Roberts’ tenure, that began when an outside group created an anti-Clinton film during the 2008 campaign.

She may dislike the new rules, but Clinton has certainly benefited from the loosened campaign finance regulations that allow wealthy donors to inject ever more money into the political system. Clinton is, at least publicly, still weighing whether to run for president. “I am thinking about it,” Clinton said during a talk in San Francisco on Tuesday, “but I am going to continue to think about it for a while.” While Clinton waits to make up her mind, a vast infrastructure of super PACs has sprung up to prepare the way for her likely run. There’s Ready for Hillary, a group that’s hauled in just shy of $6 million over the past year to build a network of on-the-ground activists when Clinton launches her campaign. Priorities USA, a super PAC that originated to boost President Obama’s reelection, is preparing to blitzing the airwaves with pro-Clinton ads. That group is poised to be the outlet for Democratic donors who want to channel millions to Clinton’s cause beyond the normal restrictions. And Correct the Record, a branch of the super PAC American Bridge, is drawing funds from major donors like Steve Bing and Susie Tompkins Buell to run an opposition research and rapid response operation.

This vast shadow campaign has corralled the biggest names in Democratic fundraising into Clinton’s corner far in advance of the next presidential election. As my colleague Andy Kroll described it, Democratic politics is stuck in the Hillary Clinton Cash Freeze. Other Democrats who might want to try their hand at running for president have been shut out before they can even contemplate 2016. Hillary might not be a fan of the Supreme Court’s decisions to eviscerate campaign finance rules, but her supporters have no qualms with embracing the new wild west of money-in-politics to pave the way for her next presidential run.