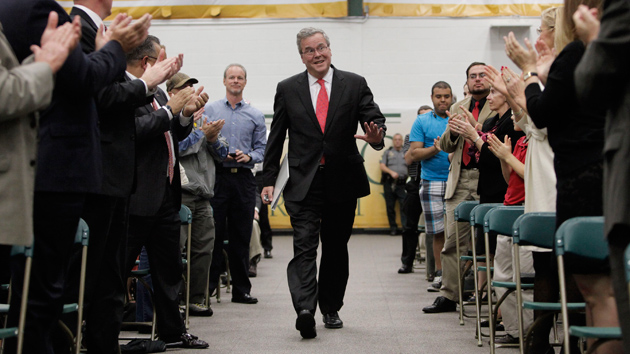 I met Jeb Bush’s biggest nightmare during a breakout session at March’s Conservative Political Action Conference held outside of DC. In a side room, Phyllis Schlafly, the octogenarian den mother of the religious right, was explaining why attendees should be afraid of a set of national educational standards, little noticed by the national political press, called Common Core. The standards are arguably Bush’s biggest political legacy. They are also the source of a rising tide of activism on the political right. One after another, conservative activists in the standing-room-only audience stood up to express their alarm. “If you are a white male boy—God forbid you’re Jewish!—you’re being targeted and it’s very scary,” fretted a woman from Texas. “Very scary.”

Cheryl Howell of Herndon, Virginia, handed me a folded scrap of paper after the discussion. It traced a direct progression from Common Core to a slate of globalist proposals activists on the far-right believe are designed to create a borderless international society—Agenda 21, the United Nations Convention on the Rights of the Child, and the United Nations’ Law of the Sea treaty.

At the center of it all, she said, pointing to the paper, was Jeb Bush.

In recent weeks, Bush—the former governor of Florida, brother of the 43rd president, and son of the 41st—has emerged as the Republican Party’s presidential sleeper of the moment, a political heavyweight who could commandeer the nervous donor class, lure Latino voters back to the GOP, and stand toe-to-toe with Hillary Clinton.

But if Bush runs, he’ll have to contend with an obstacle every bit as daunting as his last name—Common Core. His educational nonprofit, the Foundation for Excellence in Education, has been a leading supporter of Common Core, and he has recently joined another group, Conservatives for Higher Standards, to defend the standards against what he calls an “avalanche” of opposition. If that avalanche grows any bigger, it threatens to block any path Bush may have to becoming the Republican Party’s 2016 standard-bearer.

Adopted five years ago by 45 states, the guidelines are designed to provide a modicum of standardization across the country, so that a child in Idaho and a child in Florida might reasonably be expected to learn the same things at the same times. From the start, the standards were derided by some conservatives for the expenses they would bring, or as a power grab that would erode local control, water down existing state curricula, or, yes, even brainwash children with leftist material. But it’s only in the last two years, as students have begun to take the Core-compliant standardized tests, that parents—and in turn, politicians and key right-leaning news outlets—have begun to take note.

Glenn Beck, who has called Common Core “the biggest story in American history,” is writing a book about the standards. Sens. Ted Cruz (R-Tex.) and Rand Paul (R-Ky.) signed a letter demanding the federal government stop funding it. Building the Machine, a new anti-Core documentary modeled after the viral video campaign to stop Ugandan warlord Joseph Kony, has been viewed 150,000 times in the two weeks since its release. Fox News bashes it on a daily basis. Even Stephen Colbert has taken on Common Core.

Like any good conspiracy, Common Core has a lot of villains. The standards were conceived in a paper by two men, David Coleman and Jason Zimba, a classicist and a physicist, respectively, who studied together at Oxford as Rhodes Scholars. Development and implementation of the standards was supported by the Bill and Melinda Gates Foundation, which boosted them by pouring hundreds of millions of dollars into state departments of education, school districts, unions, universities, and educational nonprofits. The US Department of Education enticed states to come on board with $4.35 billion in funding from a stimulus program called Race to the Top.

But to the extent that there is a political villain outside Washington, it’s Bush. He’s been the standards’ biggest cheerleader, crisscrossing the country to sell Republicans and business groups on his idea of a corporate educational makeover. And unlike other Republicans on the 2016 short list, many of whom have started questioning the standards, Bush is not backing down. “If you’re comfortable with mediocrity, fine,” he told critics in a speech at the National Press Club in February. The testing, he said at an event in Florida’s Broward County last month, is “truth serum for our communities.” And at a speech in Boston last fall, Bush played the tin-foil-hat card. “Criticisms and conspiracy theories are easy attention grabbers. Solutions are hard work.” In March, he kicked off a 10-week ad campaign to whip up support for the embattled standards.

Now, even politicians who are featured in pro-Common Core literature are getting cold feet—or in some cases, deliberately undermining the standards. Last month, Louisiana Gov. Bobby Jindal, like Bush a 2016 contender popular among the Chamber of Commerce crowd, backed a bill in his state’s Legislature that would have suspended implementation of Common Core and formed a committee to study it. When the bill died, Jindal promised to unilaterally remove Louisiana from the standards (something he lacks the power to actually do). Likewise, Scott Walker, Wisconsin’s Republican governor, supported the program at first but recently reversed course. Ditto former Arkansas Gov. Mike Huckabee.

Bush’s steadfast support for Common Core has left many activists on the right at a loss. Some say he means well but has been co-opted by leftists. But Michelle Malkin, a best-selling conservative author and television commentator, holds a more typical view. She accuses Bush of corporate self-interest, highlighting his own close ties to private education companies.

“There are Republicans and there are conservatives—conservatives would look at this and say, ‘This is not a good idea; why are we doing this?'” says Jane Robbins, a senior fellow at the American Principles Project, when I ask about Bush. “You have the elite crony capitalist wing of the party that supports it.”

According to its loudest opponents, Common Core isn’t just education reform—it’s a literally life-and-death issue. Tim Farley, a principal from Kinderhook, New York, told me about two of his students who attempted suicide and about several others who had begun cutting themselves. Although he lacked definitive evidence, he believed it was because of the strains of the new standards. Dr. Gary Thompson, a Utah-based child psychologist who has testified in front of state legislators on the standards and has appeared on Beck’s program, called Common Core “child abuse.” Want other horror stories? Just Google “Common Core Syndrome.”

If Bush runs, he could take comfort in the example of past candidates who managed to capture the nomination despite being on the wrong side of an issue causing fits among the grassroots. Building the blueprint for the Affordable Care Act didn’t prevent former Massachusetts Gov. Mitt Romney from becoming the party’s nominee in 2012. But Romney could at least draw offer an alibi, however shaky, that health care reform was a state issue. Bush so far is unrepentant in his backing of Common Core, or in his fundamental belief in national education standards.

A recent analysis by statistical guru Nate Silver concluded that Bush doesn’t have much to worry about because most Republican voters either don’t know what Common Core is or don’t think it is so bad. But the data Silver was working with was from June 2013, when the backlash to the standards was only just beginning to coalesce. It’s only in the last year, as schools have begun to align their curricula to prepare for the first round of testing, that activists have seized on the issue as a political wedge. Maybe in holding fast Bush knows something that Jindal and Walker don’t. No matter how much he may be appreciated by the party’s donor class, among the growing swath of conservatives worried about Common Core, he’s got some explaining to do.

“We have George Soros, we have Bill Gates, we have Jeb Bush, we have Mike Huckabee, and you would think that those would be very strange bedfellows, but in fact they are the corporate elitists,” Chris Quackenbush, a cofounder of Stop Common Core Florida, told me. “The idea is to control us peons because we don’t know anything.”