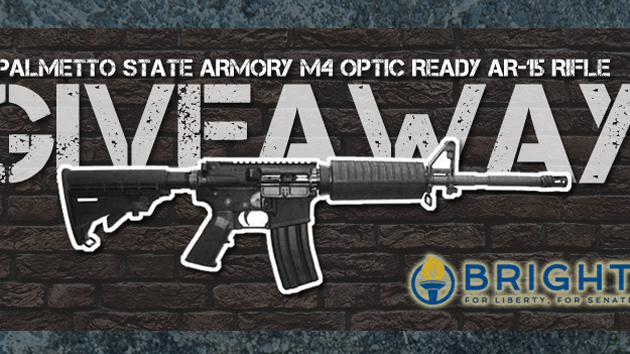 Ron Paul announced recently that he is giving away a gun because “there can be no liberty without the ability to defend it.” As part of its “Defend Liberty Gun Giveaway,” one lucky donor to the former Texas congressman’s organization, Campaign for Liberty, will receive a DDM4 AR-15. But Paul isn’t alone. More than a dozen candidates for national and local office have offered up free firearms to their supporters during the 2014 election cycle, with gifts ranging from pistols to shotguns to an AR-15 customized by the gubernatorial candidate himself. It’s the year’s hottest conservative campaign gimmick.

While candidates may be exploiting right-wing fears of an impending Obama firearm confiscation, the phenomenon isn’t new. The tactic traces back to at least 1994—not coincidentally the last time fears of a gun-grabbing Democratic president reached a fever pitch. Surprise: All the gun-giving candidates are Republicans. Historically, these gun giveaways haven’t been terribly successful. With the exception of three incumbent politicians, none of the candidates who have tried to entice voters with firearms have ever gone on to win their races.

South Carolina state Sen. Lee Bright, 2014: Bright, who is challenging Sen. Lindsey Graham (R-S.C.), is handing out an AR-15 from Palmetto State armory to a member of his email list.

Former Rep. Tom Tancredo (R-Colo.), 2014: The former presidential candidate and current Colorado gubernatorial contender is teaming up with Ted Nugent—who once told his rivals to “suck on my machine gun”—to hand out an AR-15 to one supporter (no donations necessary).

Colorado state Sen. Greg Brophy, 2014: Not to be outdone by Tancredo, his rival for the gubernatorial nomination is offering a Smith & Wesson M&P15—personally modified by the candidate, to one lucky member of his email list. “I tricked this baby out with all the MagPul stuff you can add!” he explains.

Conrad Reynolds, 2014: Reynolds, a retired Army colonel who is a seeking a congressional seat in Arkansas, is giving supporters wooden nickels that enter them in a lottery to win an AR-15.

Mike Boudreaux, 2014: A $20 raffle ticket gave supporters of Boudreaux, a candidate for sheriff in California’s Tulare County, a chance to win pistols and shotguns.

Chuck Maricle, 2014: This handgun instructor and GOP candidate for state rep gave an AR-15 to one rally attendee.

Alan Wilkins, 2014: This police sergeant’s campaign to be Platte County, Nebraska, sheriff hit a snag when his gun raffle was deemed illegal.

Chris Fiora, 2014: A Maryland sheriff candidate, Fiora gave away a DPMS/Panther Arms AR-10 at a fundraiser in which he also roasted a cow.

Rep. Steve Stockman (R-Texas), 2013: Stockman, who advocated using liberals’ tears as a gun lubricant, gave away an AR-15 on the Fourth of July to entice people to sign up for his email list.

Curtis Coleman, 2013: The Arkansas gubernatorial candidate offered up a Palmetto PA-15 from Don’s Weaponry in North Little Rock to a lucky supporter.

Missouri state Sen. Brian Nieves, 2013: He gave a Sig Sauer 516 Patrol to an attendee at a $100-a-ticket fundraiser to benefit his campaign committee.

Missouri state Rep. John McCaherty, 2012: During his reelection campaign, McCaherty raffled off an AR-15 provided by the National Rifle Association. He had just one simple request of his supporters: “Do not answer any questions about the event at all.”

Illinois state Rep. Josh Harms, 2012: Harms, who bragged to a local newspaper that he once shot a bear in Canada, sold $5 raffle tickets for a chance to win a revolver, shotgun, or rifle.

Dean Allen, 2009: The candidate for South Carolina adjutant general, which manages the state national guard, gave away an AK-47 at a “machine gun social” fundraiser. “I like to tell people I’m not the country club conservative,” Allen told the Greenville News. “I’m the machine gun one.”

Peter James, 2007: The Maryland GOP congressional candidate announced his intent to give away 100 pistols and a few machine guns. Reporters who showed up for the big event were disappointed to discover the weapons were in fact water guns.

Mike Curtiss, 2000: Supporters of the downstate Illinois congressional candidate who bought $5 raffle tickets got a chance to bring home an AR-50 dubbed the “Rod Blagojevich Special,” in honor of the then-Chicago congressman, who was pushing to have the gun outlawed. “I see the humor in this,” Blagojevich told the Chicago Sun-Times. “God love the guy. It’s OK. With all due respect to [Curtiss], he is nuts about guns.” Curtiss also gave away a $400 box of cigars.

Michael Concannon, 2000: The North Carolina state Senate candidate raffled off a gun to fund his campaign.

Randy Linkmeyer, 1994: The California state Senate candidate held a “Family Firearm Safety Day” to give guns and ammunition to a select few supporters. Kids were welcome.