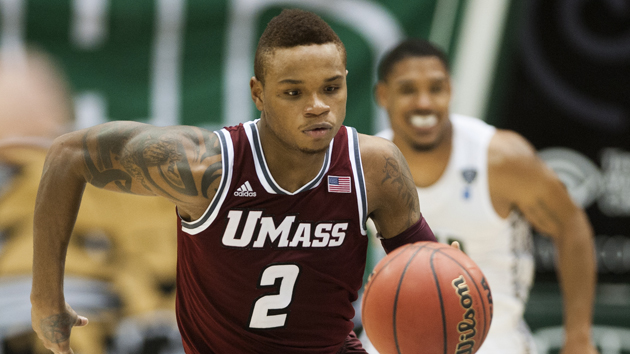 University of Massachusetts shooting guard Derrick Gordon came out as gay to the rest of his team last week, making him the first openly gay player in Division 1 men’s college basketball, according to OutSports and ESPN.

“I was thinking about summer plans and just being around my teammates and how it was going to be,” Gordon told ESPN. “I just thought, ‘Why not now? Why not do it in the offseason when it’s the perfect time to let my teammates know and everybody know my sexuality?”

Gordon averaged 9.4 points and 3.5 rebounds a game this season for the Minutemen, who were bounced from the first week of the NCAA Tournament in March. He said he had had private conversations with prominent gay sports figures before coming out, including Jason Collins, who became the first openly gay active player in the NBA when he was signed by the Brooklyn Nets this season.

Gordon posted this photo on Instagram after the announcement, expressing his relief:

This is the happiest I have ever been in my 22 Years of living…No more HIDING!!!…Just want to live life happy and play the sport that I love…Really would love to thank my family, friends, coaches, and teammates for supporting me….I would also like to thank my support team Wade Davis, Jason Collins, Brian Sims, Micah Porter, Anthony Nicodemo, Patrick Burke, Billy Bean, Gerald McCullough, Kirk Walker…You guys are AWESOME!!! Ready to get back in the gym with my teammates and get on the GRIND and get ready for next season!!!! #BETRUE #BEYOURSELF #HONEYBADGER