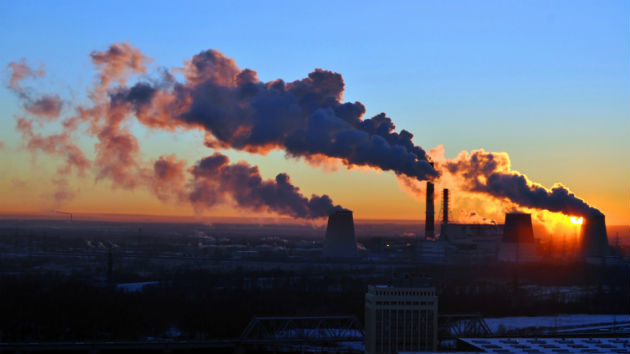 This story originally appeared on the Guardian‘s website and is reproduced here as part of the Climate Desk collaboration.

The US supreme court endorsed the Environmental Protection Agency’s efforts to deal with air pollution blowing across state lines on Tuesday, in an important victory for the Obama administration as well as downwind states.

The decision delivers an important victory to the EPA which has wrestled for years with trying to regulate air pollution as it moves beyond smokestacks and tailpipes. It is also a win for states such as Connecticut, where 93 percent of air pollution is from out-of-state sources.

Major power companies, such as Southern Company and American Electric Power Company, and states such as Texas, Michigan and Ohio had sued to block the rule. The Washington DC court of appeals put the rule on hold in 2012.

The reversal of that ruling now means that about 1,000 power plants, mainly in the eastern half of the country, will have to adopt new pollution controls to limit emissions of nitrogen oxide and sulfur dioxide.

Air pollution remains a growing problem in America despite decades of environmental protection –and Ginsburg acknowledged the complexities of putting a regulatory regime in place.

“Pollutants do not emerge from the smokestacks of an upwind state and uniformly migrate downwind. Some pollutants stay with­ in upwind states’ borders, the wind carries others to downwind states, and some subset of that group drifts to states without air quality problems,” Ginsburg wrote, going on to quote a phrase from the Bible. “In craft­ing a solution to the problem of interstate air pollution, regulators must account for the vagaries of the wind.”

Regulators also had to take into account that emissions are transformed into different pollutants as they travel downwind, Ginsburg wrote.

Under the EPA rule, each upwind state was allocated a budget for total amount of pollution they could produce in a year. The dissenting states had argued they should be allowed to create their own plans to cut emissions to solve the problem.

However, the supreme court disagreed, arguing that would lead to “costly over-regulation”.

“[The] EPA’s cost-effective allocation of emission reductions among upwind States, we hold, is a permissible, workable, and equitable interpretation of the Good Neighbor Provision,” the court said.

Justice Scalia in his Dissent said the EPA rule was an “undemocratic revision” of the clean air act. “Today’s decision feeds the uncontrolled growth of the administrative state at the expense of government by the people,” he said in a statement read from the bench.

The EPA had tried three times over the last two decades to control air pollution wafting across state lines, the court said. Congress has also weighed in dozens of times.

The EPA argued when the rule was originally adopted in 2011 smog and particle pollution from power plants caused 34,000 premature deaths every year, and triggered more than 400,000 asthma attacks.

The EPA administrator, Gina McCarthy, said the decision was “a resounding victory for public health.”

The American Lung Association, which had joined the lawsuit, said on Tuesday the court decision was a “life-saving standard”. “The people in these 28 states needed the EPA to enforce the law and protect them from pollution,” it said in a statement.

Opponents said the decision departed from the intent of the clean air act – that the EPA and states work together to cut pollution.

“The Supreme Court majority has refused to allow the states to have any voice in the practicalities of determining the impact of their emissions on neighboring states,” said Richard Faulk, director of the energy and law center at George Mason University and a partner in a corporate law firm.