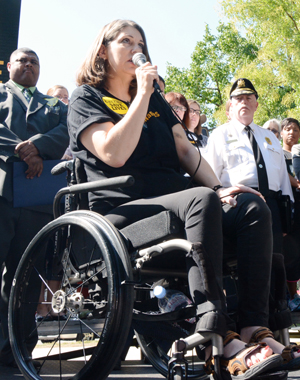 Last week, Mother Jones published an in-depth report exposing vicious, degrading tactics used by gun-rights activists against women, from Arizona to Texas to Indiana. In response, right-wing pundit Dana Loesch and others have claimed that an assault on Jennifer Longdon—a mom, gun owner, and gun violence survivor paralyzed by a bullet—is a hoax. Their attack on Longdon (and Mother Jones) is as inane and illogical as it is wrong.

As I reported in detail last week, a man who recognized Longdon as a gun-reform advocate from a television broadcast approached her in the Indianapolis airport on April 25 and spat in her face. Loesch says that because no video evidence of the attack was presented with the story, it simply could not have happened. “I was in the same airport on April 25th and it was quite busy,” she wrote. “Should be easy to obtain security footage.” Beyond Loesch’s faith in the 24/7 surveillance state as the new standard of fact-finding—nothing is true unless you roll tape!—her comrades say that further proof of a conspiracy rests with CNN supposedly monopolizing all TVs in the Indy airport and having “no record” of the Longdon footage. Got it.

Longdon spoke to me in detail, in multiple interviews, about what she went through in Indianapolis. It was one of several such incidents of harassment and bullying she has endured over several years as an outspoken woman and advocate of gun reform. I confirmed her account of the spitting attack in the airport with other people who she spoke to about it at the time of the incident. The additional harassment and stalking she endured in Phoenix last year, also detailed in my report, was corroborated by a Phoenix police official directly involved in the case.

Each person I spoke with about Longdon in the course of my reporting conveyed that she is a person of integrity and fortitude, qualities you might not be surprised to hear attributed to a person who travels around the country in a wheelchair, in constant physical pain, to advocate for greater public safety. Nobody I spoke with relied on bizarre conjecture and a quick google search, keyword “CNN,” to insinuate she was a liar.

The tactics deployed by Loesch and others to try to discredit our report are nothing new. If they have one shred of evidence that the spitting assault on Longdon didn’t take place, we are all ears. Betcha a nickel—or heck, why not just make it a hundred bucks—that none will be forthcoming.

You can read the full Mother Jones investigation, with the pattern of bullying and harassment it documents in detail, here. You can also watch my discussion of what’s behind this troubling issue with MSNBC’s Chris Hayes, below. Hayes, who also reported on this subject recently, describes the phenomenon this way: “What you’re getting is a gun movement that is dominated by a very small, very hardcore group of people, with very fringe views, who can be very aggressive. And we’ve seen this play out time and time again…in which you’re not just getting arguments about policy, you’re getting rank, pure intimidation.”