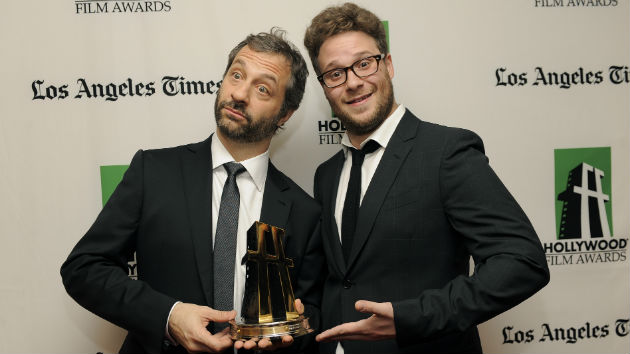 In response to the mass shooting that took place near the University of California, Santa Barbara, on Friday night, Washington Post film critic Ann Hornaday wrote that the killer’s YouTube manifesto was a “sad reflection of the sexist stories we so often see on screen.” While pointing to a broader “sexist movie monoculture” that can be “toxic for women and men alike,” Hornaday specifically highlights Neighbors—a recently released, critically acclaimed comedy starring Seth Rogen—and Judd Apatow movies:

How many students watch outsized frat-boy fantasies like “Neighbors” and feel, as [the shooter Elliot] Rodger did, unjustly shut out of college life that should be full of “sex and fun and pleasure”? How many men, raised on a steady diet of Judd Apatow comedies in which the shlubby arrested adolescent always gets the girl, find that those happy endings constantly elude them and conclude, “It’s not fair”?

Movies may not reflect reality, but they powerfully condition what we desire, expect and feel we deserve from it. The myths that movies have been selling us become even more palpable at a time when spectators become their own auteurs and stars on YouTube, Instagram and Vine. If our cinematic grammar is one of violence, sexual conquest and macho swagger — thanks to male studio executives who green-light projects according to their own pathetic predilections — no one should be surprised when those impulses take luridly literal form in the culture at large.

Part of what makes cinema so potent is the way even its most outlandish characters and narratives burrow into and fuse with our own stories and identities. When the dominant medium of our age — both as art form and industrial practice — is in the hands of one gender, what may start out as harmless escapist fantasies can, through repetition and amplification, become distortions and dangerous lies.

Hornaday goes on to discuss the important issue of the state of women in Hollywood. But her Apatow and Rogen-related commentary is what caught the very public attention of, well, Apatow and Rogen.

.@AnnHornaday I find your article horribly insulting and misinformed.

.@AnnHornaday how dare you imply that me getting girls in movies caused a lunatic to go on a rampage.

Apatow weighed in more heavily, and shared his thoughts on how he believes American media outlets profit from mass murder:

@AnnHornaday at least you are not writing another thoughtless article. Maybe keep the computer shut off for a while and think more.

“@Sethrogen: .@AnnHornaday I find your article horribly insulting and misinformed.”She uses tragedy to promote herself with idiotic thoughts

Remember everyone – ads next to articles generate money. They say something shocking and uninformed & get you to click on it to profit.

Here is how it all works. Anne says something thoughtless. I say it is wrong then CNN asks everyone to debate and it becomes TV.

I said no. I wonder if Anne can prevent herself from going on and becoming part of how these tragic events become profit centers for media

Hornaday did not immediately respond to Mother Jones‘ request for comment.

UPDATE, May 27, 2014, 3:04 p.m. EST: Hornaday responded to Rogen, Apatow, and her other critics in the following Washington Post video: