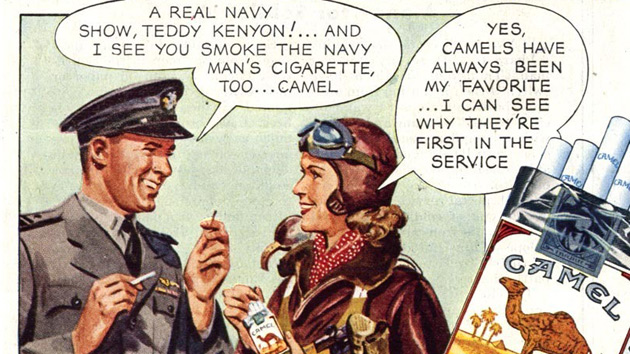 Suppose you wanted to quit drinking, but all the AA meetings in your town were held in the back of a bar with $2 well drinks?

That’s basically the conundrum the US military faces when it comes to regulating tobacco. Smoking is a drain on the force, physically and financially, and over the years the brass has implemented all sorts of efforts to get soldiers and sailors to avoid it, with some success. But every time military officials make a move to stop offering cheap cigarettes to their personnel, they get shot down by the tobacco industry’s allies in Congress. In the latest skirmish, earlier this month, Republicans on the House Armed Services Committee launched a preemptive strike to prevent the Navy from ending tobacco sales on Navy and Marine bases and ships.

By age, education, demographics, and circumstances (high-stress situations interspersed with long periods of boredom), soldiers are an ideal market for tobacco products, which have historically been sold on military installations and ships for as little as half of what civilians pay. For decades, tobacco lobbyists have worked with friendly legislators to maintain the cheap supply. In the early 1990s, for instance, the industry jumped into action after the commander of the USS Roosevelt declared his ship smoke-free. Two Democratic members of the House Armed Services Committee introduced an amendment to the defense funding bill requiring all ships to sell cigarettes, and the Navy caved.

In 2007, researcher Ruth Malone and her colleagues at the University of California-San Francisco published a study in the journal Tobacco Control detailing no less than seven failed attempts since 1985 by members of Congress and military officials to raise the price of military tobacco products to civilian levels. And while the Pentagon eventually succeeded in narrowing the price gap, military stores are still exempt from the hefty state and local tobacco taxes levied to discourage smoking. In a 2011 study comparing cigarette pricing on and off base, another research team determined that Marlboro Reds, which cost an average of $6.73 a pack at the local Walmart, went for just $4.99 at military installations. “The industry and its allies repeatedly argued—particularly in communications to service members—that raising commissary prices constituted an ‘erosion of benefits,'” wrote Malone et al.

The “benefits” argument, as well as the notion that it violates a soldier’s rights to have to buy smokes from an outside retailer, invariably arises whenever there’s talk of new military smoking policies. Consider the latest episode. On March 14, Jonathan Woodson and Jessica Wright, high-level Pentagon officials for health and personnel affairs, sent a memo to all of the military branches laying out some of tobacco’s downsides—diseases and fatalities, absenteeism, steep health costs, and the fact that wounded warriors who smoke tend to heal poorly. “Although we stopped distributing cigarettes to Service members as part of their rations, we continue to permit, if not encourage, tobacco use,” they explained. “The prominence of tobacco in [military] retail outlets and permission for smoking breaks while on duty sustain the perception that we are not serious about reducing the use of tobacco.”

“Well, I’ll tell you what. If you want to make us all healthy, then let’s outlaw war, because war is really dangerous.”

Two weeks later, after military newspapers reported that the Navy was considering a ban on tobacco sales, Rep. Duncan Hunter (R-Calif.), who enlisted in the Marines after the 9/11 attacks, wrote a letter to Navy Secretary Ray Mabus opposing any such move. It would be an intrusion on “personal decision-making,” he said, and besides, the Navy and the Marines have bigger priorities. In early April, after a group of Democratic senators encouraged Mabus to take action, Hunter and two GOP colleagues, Reps. Richard Hudson (N.C.) and Tom Rooney (Fla.), wrote to the leaders of the House Appropriations Committee: “Given the current fiscal climate, the strain on the Navy to conduct global operations, the impending reduction to the size of the fleet and personnel, recent efforts to restrict access to tobacco products is a frivolous abdication of more urgent matters of national security.”

On May 7, as the House Armed Services Committee marked up the 2015 National Defense Authorization Act, Rep. Hunter introduced an amendment forbidding any new military policy that “would limit, restrict, or ban the sale of any legal product category” currently for sale on bases or ships—the committee approved the amendment 53 to 9. (The Senate Armed Services Committee debates the defense bill this week.) “We sleep in the dirt for this country. We get shot at for this country. But we can’t have a cigarette if we want to for this country, because that’s unhealthy,” Hunter told his fellow committee members after San Diego-area Democrat Rep. Susan Davis opposed his amendment. (See video below.) “Well, I’ll tell you what. If you want to make us all healthy, then let’s outlaw war, because war is really dangerous.”

War is indeed dangerous, but cigarettes kill far more soldiers and citizens than war does. It’s not even close. More than 480,000 Americans die from smoking and secondhand smoke exposure every year, according to the Centers for Disease Control and Prevention—more than died on the battlefields of World War I, World War II, Korea, and Vietnam combined.

The odds are particularly grim for military veterans, who make up about a quarter of the adult male population and smoke at significantly higher rates than nonveterans. In the 2007-2010 National Health Interview Survey, 36 percent of male vets ages 45 to 54 said they were current smokers, compared with 24 percent of men in that age range who never served.

Many of those vets got hooked as young men in the service. While less than 20 percent of civilians smoke, a 2011 military survey reported smoking rates of 24 percent for Navy personnel and 31 percent for Marines. (In addition, 32 percent of Marines said they used smokeless tobacco.) A 2009 Institute of Medicine (IOM) committee report requested by the military notes that smoking rates for soldiers returning from war zones are about 50 percent higher than rates for non-deployed personnel.

“We estimate 175,000 current active duty service members will die from smoking unless we can help them quit.”

All of this puffing amounts to a massive bill, not just for the men and women dying horrible deaths from cancer and heart disease and emphysema, but for the taxpayers, too. In his letter to the Navy, Hunter noted that banning tobacco sales would mean a loss of profits for the Military Exchange Command. In reality, cigarettes are a net loss for the military. For every dollar of profit from selling tobacco to personnel, according to data from a 1996 Inspector General’s report, the Pentagon spent more than nine dollars on healthcare and lost productivity. And that doesn’t factor in veterans’ medical costs. In 2008 alone, according to the IOM, the VA shelled out $5 billion to treat vets for chronic obstructive pulmonary disease, which primarily afflicts smokers. “Tobacco use costs the DOD an estimated $1.6 billion annually in medical costs and lost work time,” Pentagon spokeswoman Joy Crabaugh told me in an email. “We estimate 175,000 current active duty service members will die from smoking unless we can help them quit.”

“The health care costs are astounding,” added Defense Secretary Chuck Hagel, who served in Vietnam, when asked about the issue recently. “Now, the dollars are one thing, but the health of your people, I don’t know if you put a price tag on that.”