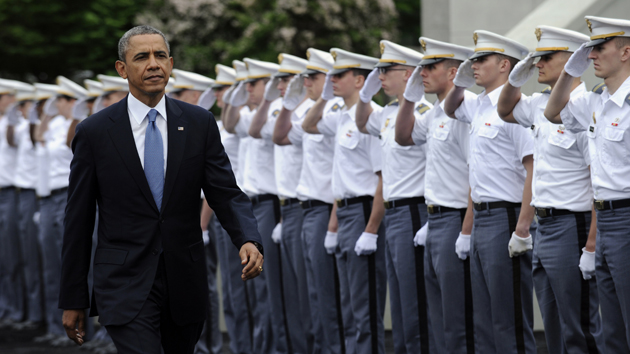 Since the end of the Cold War, foreign policy has become much more challenging. In a post-bipolar world where nonstate actors pose real threats and disrupters (good and bad) are everywhere, the issues are knottier and unforeseen developments often yield difficult options. In the aftermath of 9/11, George W. Bush chose not to come to terms with this fundamental change. Instead, he opted for a blunderbuss policy dominated by a misguided invasion of Iraq. President Barack Obama inherited a helluva cleanup job. And as he had handled the details—such as winding down the wars in Iraq and Afghanistan—he has had tried to articulate an overall strategy. His latest stab at this was the speech he delivered to West Point graduates this morning.

Early in the address, Obama noted, “you are the first class to graduate since 9/11 who may not be sent into combat in Iraq or Afghanistan.” The young men and women before him cheered. It was a poignant moment. Then Obama proceeded to outline a larger vision. He summed up his stance in these lines:

[S]ince George Washington served as commander in chief, there have been those who warned against foreign entanglements that do not touch directly on our security or economic well-being. Today, according to self-described realists, conflicts in Syria or Ukraine or the Central African Republic are not ours to solve. Not surprisingly, after costly wars and continuing challenges at home, that view is shared by many Americans.

A different view, from interventionists on the left and right, says we ignore these conflicts at our own peril; that America’s willingness to apply force around the world is the ultimate safeguard against chaos, and America’s failure to act in the face of Syrian brutality or Russian provocations not only violates our conscience, but invites escalating aggression in the future.

Each side can point to history to support its claims. But I believe neither view fully speaks to the demands of this moment. It is absolutely true that in the 21st century, American isolationism is not an option. If nuclear materials are not secure, that could pose a danger in American cities. As the Syrian civil war spills across borders, the capacity of battle-hardened groups to come after us increases. Regional aggression that goes unchecked—in southern Ukraine, the South China Sea, or anywhere else in the world—will ultimately impact our allies, and could draw in our military.

Beyond these narrow rationales, I believe we have a real stake—an abiding self-interest—in making sure our children grow up in a world where schoolgirls are not kidnapped, where individuals aren’t slaughtered because of tribe or faith or political beliefs. I believe that a world of greater freedom and tolerance is not only a moral imperative—it also helps keep us safe.

But to say that we have an interest in pursuing peace and freedom beyond our borders is not to say that every problem has a military solution. Since World War II, some of our most costly mistakes came not from our restraint, but from our willingness to rush into military adventures—without thinking through the consequences, without building international support and legitimacy for our action, or leveling with the American people about the sacrifice required. Tough talk draws headlines, but war rarely conforms to slogans. As General Eisenhower, someone with hard-earned knowledge on this subject, said at this ceremony in 1947: “War is mankind’s most tragic and stupid folly; to seek or advise its deliberate provocation is a black crime against all men.”

This is not new. Obama chooses no specific camp. He does not truck with so-called realists and isolationists who do not want the United States to be involved with overseas conflicts that do not directly and immediately threaten the United States. Nor does he side with interventionists who call for US military engagement in trouble spots around the world. Cognizant of the costs of war (money, lives, and more), he does not want to overcommit the United States. Citing the costs of nonaction and the interconnectedness of today’s world, he does not want to remain on the global sidelines. He’s certainly no neocon eager to deploy US military resources overseas to intervene in Syria or to up the ante with Russia regarding Ukraine. (Obama announced he would boost efforts to help Jordan, Lebanon, Turkey, and Iraq, deal with refugees and cross-border terrorists from Syria, and “ramp up” support for elements of the Syrian opposition “who offer the best alternative to terrorists and a brutal dictator.” He said he would keep working with the IMF and allies to bolster Ukraine and its economy and isolate Russia.) But Obama did defend his use of drone strikes. He noted, “In taking direct action, we must uphold standards that reflect our values. That means taking strikes only when we face a continuing, imminent threat, and only where there is near certainty of no civilian casualties. For our actions should meet a simple test: We must not create more enemies than we take off the battlefield.” (Yet his administration has not always met this standard.)

For years, Obama has been trying to form and sell a balanced approach that justifies certain military interventions and limits others—while redefining national security interests to include climate change and other matters. That’s a tough task. The world is not a balanced place. It’s likely that Obama’s handling of foreign policy will continue to be judged on a case-by-case basis and less on the establishment of an integrated doctrine. Given the global challenges of this era, a grand plan may not be realistic.