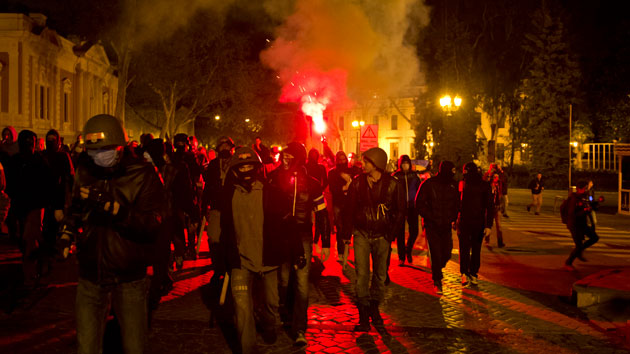 Pro-Ukraine protestors march towards Odessa's trade union building, where two days before more than 40 people were killed in a fire that tore through the structure. Vadim Ghirda/AP

This article is being updated as news breaks. Click here for the latest.

After months of steady conflict and protest in a dozen cities in eastern Ukraine, the crisis in the country has escalated in the past week with deadly clashes in Slovaynsk, and in the port city of Odessa—the first serious instance of violence outside eastern Ukraine. The clashes have left more than 70 dead, according to figures publicized by the Ukrainian Interior Ministry. With the nation’s May 25 presidential and mayoral elections looming, Ukrainian officials are desperate to maintain order, sending an elite special forces unit to help safeguard Odessa, appointing a new military commander, and even urging the creation of a “volunteer army.” (The Kremlin, for its part, has called Kiev’s plan to go forward with the elections “absurd.“) Below is a rundown of the recent developments. We’ll update this post as news unfolds.

What just happened in Odessa? In the deadliest day of the Ukraine crisis since the ouster of president Viktor Yanukovych, at least 46 people died in the Black Sea port city on Friday, following clashes between pro-Russian separatists and pro-Ukraine activists. The conflict began as armed street-fighting and escalated when the House of Trade Unions, which had become a makeshift headquarters for pro-Russian forces, was set ablaze, in part by Molotov cocktails. Dozens died of smoke inhalation or as they jumped from the building to escape the flames. Most of those killed are believed to have been pro-Russian separatists. Ukraine’s Foreign Ministry blamed the violence on provocateurs “paid generously by the Russian special services,” while Russia pointed the finger at Right Sector, a Ukrainian nationalist group. Here’s video of the incident:

Over the weekend, a group of pro-Russian protesters attacked an Odessa police station demanding the release of other demonstrators, and leading to the release of 67 activists. Odessa has a diverse population of Ukrainians, Georgians, and Tatars, but a large percentage of the region is Russian-speaking. Fearing additional Russian encroachment, Ukraine sent an elite special forces unit to Odessa on Monday.

Violence is escalating in eastern Ukraine, too: According to Ukraine’s Interior Minister Arsen Avakov, four Ukrainian officers were killed and 30 wounded in Slaviansk on Friday after Ukrainian troops launched an offensive against separatist forces occupying government buildings. The small city has become a hub for the movement opposing the new interim government in Kiev. On Monday, 30 pro-Russian separatists were also killed in the city after ambushing Ukrainian forces, according to Avakov.

During Friday’s fighting, three Ukrainian helicopters were shot down near Slaviansk. The Ukrainian Security Service reported that one of the helicopters was shot down with a surface-to-air missile, complex equipment that suggests the separatists have ties to the Russian military; Moscow denies any involvement. Russian President Vladimir Putin has warned that negotiations between Ukraine and Russia will remain stalled until Ukraine pulls its troops out of Slaviansk.

The video below, highlighted by The Interpreter, purports to show Ukrainian Air Force planes flying over Slaviansk on Monday. They seem to be using flares to deflect infrared-guided surface-to-air missiles—the same kind of missiles that were used to down several Ukrainian helicopters last week.

Responding to the violence, Ukraine’s largest bank, Privatbank, has temporarily closed all of its branches in Donetsk and Luhansk. It said in a statement that in 10 days, 38 of its ATMs, 24 branches, and 11 cash collection vans had “suffered arson, assault and wanton destruction” at the hands of “armed people [who] break into bank branches and seize security vans.” The bank has been targeted by separatists in part because its co-owner, billionaire and current Dnipropetrovsk region governor Igor Kolomoisky, offered the Ukrainian military a $10,000 bounty for every pro-Russian “saboteur” they catch.

The closures are likely to cause economic havoc for many: Privatbank said that it processes the pensions of more than 400,000 retirees, along with other benefits for an additional 220,000 people across both regions.

Kidnappings and death threats: On Saturday, seven military observers from the Organization for Security and Cooperation in Europe (OSCE) were released after having been held hostage by pro-Russian separatists, who had seized their bus and accused them of spying in late April.

Meanwhile, kidnappings, disappearances, and death threats have been escalating. Pro-Russian activists have been posting photos and personal information of EuroMaidan activists and members of Right Sector that the groups allege had a hand in stoking Friday’s violence in Odessa. The posts often include captions calling for activists to “find and destroy” those pictured, reports Kyiv Post. Human Rights Watch also published a report today chronicling abductions of activists, journalists, and local officials in eastern Ukraine. Most of those who’ve been released were beaten while captive, and some were seriously injured, HRW reports. Still others, including two members of the local election commission in Konstantinovka, remain captive and their whereabouts are unknown.

At Buzzfeed, Mike Giglio, who himself was briefly held hostage near Slaviansk, also reports on the increasing kidnappings of pro-Ukraine activists, as well as an “exodus” of locals such as Olena Tkachenko, who ran a hotline for pro-Ukraine activists in Donetsk. After getting threatening text messages, including one that said “We will kill you all,” she packed up a few belongings and told her 9-year-old daughter that they were going on vacation.

In addition to kidnappings and those leaving on their own, reports of disappearances continue to roll in:

Natalya Korolevskaya, former Yanukovych minister and critic of separatism, has gone missing on her way to Sloviansk: http://t.co/20IQPKtGlk

Nearby countries are getting nervous: On Monday, Moldova’s president, prime minister, and parliament speaker issued a statement saying they were placing troops on the border with Ukraine on alert because of the growing violence. And Reuters reports that Lithuania’s Ministry of National Defense announced that it had received a note from Russia suspending a 2001 military agreement between the two countries. Lithuania has been generally supportive of Ukraine and the Maidan movement. The agreement between the two nations had required Russia and Lithuania to share some military intel, and allowed mutual military inspections—of Russia’s Baltic fleet in the nearby region of Kaliningrad, and of the Lithuanian military.

“Lithuania kept all conditions of this agreement and has not given a pretext for such Russian action,” a defense ministry spokesperson told Reuters.

Hundreds of US troops have also been deployed to Latvia, Lithuania, and Estonia for joint training.

Is the US doing anything to respond? On Friday, Defense Secretary Chuck Hagel called on NATO to reconsider its relationship with Russia, calling the ongoing violence in Ukraine a “clarifying moment” for NATO’s post-Soviet relationship with Russia. Meanwhile, President Obama promised further sanctions on Russia if it disrupts the presidential elections that are set to take place in Ukraine on May 25. Senate Republicans have also introduced a bill that would go even further than Obama’s proposals, increasing sanctions on Russia’s banking and energy sectors and providing Ukraine with military assistance, including weapons.

Update 1, May 7, 2014 5:15 p.m. EDT: In a Kremlin press conference, Russian President Vladimir Putin offered two directives that could signal a move towards deescalation of the Ukraine conflict. He called on pro-Russian separatists in the southeast of Ukraine to postpone the referendum vote scheduled for this Sunday, May 11. The purpose of the impending referendum is to vote on the secession of two eastern Ukraine provinces.

Putin also announced that he was pulling Russian troops back from the Ukrainian border. NATO officials, however, say they haven’t seen any immediate evidence of troops receding.