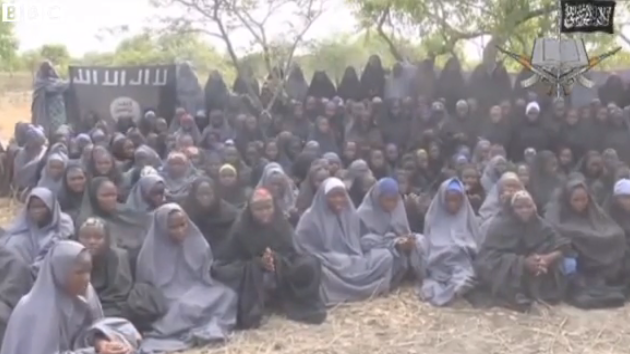 Image from a video released Monday by Boko Haram claiming to show about 130 of the schoolgirls the group kidnapped in mid-April.

Last week, the United States dispatched a team of military and law enforcement officials to Nigeria to provide advice and surveillance technology to aid in the search for the nearly 300 schoolgirls the Islamist militant group Boko Haram has held hostage since April. In the coming weeks, as the United States and Nigeria hone their strategy to locate and rescue the girls, the United States might supply equipment or funding to the country’s security forces. Human rights groups, though, are concerned that increasing US aid to the Nigerian government could backfire.

According to Nigerian President Goodluck Jonathan, Boko Haram has infiltrated his security forces. If so, sensitive intelligence data could end up with Boko Haram sympathizers, undermining the effort to rescue the girls, says Vanda Felbab-Brown, an expert on insurgencies at the Brookings Institute. And if material support is provided to the Nigerian military, human rights activists are concerned it could wind up in the wrong places. “There is every likelihood that US aid could… eventually land in the hands of the insurgents,” says Hamsatu Allamin, a regional coordinator with the Nigeria Stability and Reconciliation Program, a conflict management organization funded by the British government.

Even if it doesn’t end up in Boko Haram’s hands, US intel and training could fuel abuses. The Nigerian military has been implicated in torture and rape, as well as thousands of extrajudicial killings of detainees over the past year, according to an analysis of mortuary records by the Associated Press. Last week, the advocacy group Human Rights First sent a letter to the Pentagon and the State Department urging the US government to ensure that any aid directed to the search for the girls “does not support individuals within the Nigerian security services who are themselves complicit in the victimization of… civilians.” The group raised this concern because the rescue operation the United States is helping set up does not fall under US laws designed to keep American resources away from human rights abusers.

The Leahy Law, passed in 1997, bars the United States from providing assistance or training to units of foreign military forces that have committed human rights abuses. But that law can be bypassed: The search team that US operatives are setting up with the Nigerian government is a new unit, meaning that it will not have a record of abuse, and will not be subject to the Leahy Law, explains Heather Hurlburt, a research fellow at Human Rights First.

Pentagon spokesman Col. Myles Caggins says that the DoD is “committed to upholding the letter and the spirit of the Leahy provisions” by providing plenty of oversight and imposing restrictions on US search assistance in Nigeria. But it is unclear how effective that oversight is, Felbab-Brown says. The US-backed search unit—which will help plan rescue and hostage negotiation efforts, provide satellite images of sites where Boko Haram is suspected to be, and intercept the kidnappers’ communications—could include people who were complicit in past human rights abuses, Hurlburt warns.

“There’s never a full guarantee where US aid ends up in a country like Nigeria,” Caggins says. For instance, he explains, if the Nigerian military needs more trucks for the rescue effort, “who’s to say [the Nigerian military doesn’t] end up with a bad sergeant behind the wheel or a good sergeant behind the wheel.” (The United States does not currently provide weapons or other such “lethal aid” to Nigeria.)

More United States involvement in Nigeria could also prompt Boko Haram to ramp up attacks on US targets in the country. For years, the US has provided non-lethal aid behind the scenes to the Nigerian military to combat the Al Qaeda-linked group, which has killed roughly 5,000 Nigerians over the past five years in its effort to take down the pro-Western government. Increased United States involvement in Nigeria via the search operation could “cause Boko Haram to focus more on US interests,” Retired Gen. Carter Ham, who until last year led the Pentagon’s Africa Command, told NPR last week.

It’s a catch-22. “The girls have become such an important issue,” Felbab-Brown says. “It’s easy to be tempted to say, ‘Ok, let’s do more, let’s do more.'” But if the United States rushes in with additional assistance, she says, it could lead to “a very counter-productive counter-insurgency.”