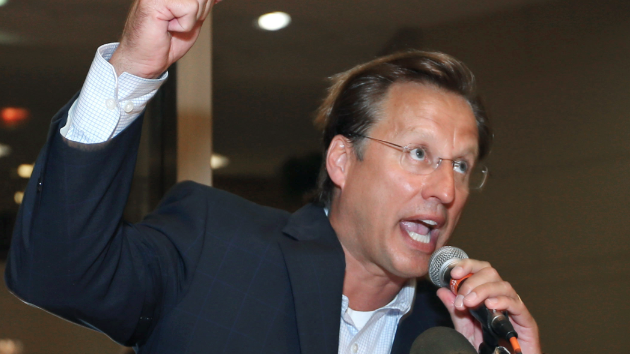 When tea party challenger David Brat sent Rep. Eric Cantor (R-Va.), the House majority leader, to the ash heap on Tuesday night, vanquishing the incumbent by more than 10 points in the primary race, the politerati were stunned. Political journalists scrambled to answer a question: who is this guy? The political pros knew that Brat had mounted a campaign largely based on two issues: bashing Cantor on immigration (that is, excoriating the congressman, who was quite hesitant about immigration reform, for not killing the possibility of any immigration legislation) and denouncing Cantor for supporting a debt ceiling deal that averted possible financial crisis. But not much else was widely known about this local professor who dispatched a Washington power broker.

A quick review of his public statements reveals a fellow who is about as tea party as can be. He appears to endorse slashing Social Security payouts to seniors by two-thirds. He wants to dissolve the IRS. And he has called for drastic cuts to education funding, explaining, “My hero Socrates trained in Plato on a rock. How much did that cost? So the greatest minds in history became the greatest minds in history without spending a lot of money.”

An economics professor at Randolph-Macon College in central Virginia, Brat frequently has repeated the conservative canard that Freddie Mac and Fannie Mae brought down the housing market by handling the vast majority of subprime mortgages. That is, he absolves Big Finance and the banks of responsibility for the financial crisis that triggered the recession, which hammered middle-class and low-income families across the country. (In fact, as the housing bubble grew, Freddie and Fannie shed their subprime holdings, while banks grabbed more.)

In his campaign speeches, Brat has pointed out that he isn’t worried about climate change because “rich countries solve their problems”:

If you let Americans do their thing, there is no scarcity, right?  They said we’re going to run out of food 200 years ago, that we’re goin’ to have a ice age. Now we’re heating up…Of course we care for the environment, but we’re not mad people. Over time, rich countries solve their problems. We get it right. It’s not all perfect, but we get it right.

He did not say what might happen to not-so-rich countries due to climate change and the consequent rise in sea levels, droughts, and extreme weather.

Asked about cuts to Social Security Disability Insurance*, Brat replied that he supported drastic reductions in payouts from social programs for seniors:

I’ll give you my general answer. And my general answer is you have to do what’s fair. Right. So you put together a graph or a chart and you go out to the American people, you go to the podium, and you say, this is what you put in on average, this is what you get out on average. Currently, seniors are getting about three dollars out of all of the programs for every dollar they put in. So, in general, you’ve got to go to the American people and just be honest with them and say, “Here’s what fairness would look like.” Right. So, maybe the next ten years we have to grandfather some folks in, but basically we’re going to move them in a direct line toward fairness and we have to live within our means.

He frets about the state of morality in schools and about Beyoncé:

For the first 13 years of your kid’s life, we teach them no religion, no philosophy, and no ethics…Who is our great moral teachers these days? Every generation has always had great theologians or philosophers by the century that you can name. Who do we got right now? [Audience: Jay-Z] Right. Right. [Audience: Beyoncé] Right. Beyoncé. When you can’t name a serious philosopher, a national name, or a serious theologian, or a serious religious leader, at the national level, your culture’s got a major problem. We got a major problem.

Brat railed against Cantor for supporting a path to citizenship for some undocumented immigrants. Brat called this a policy of “amnesty” and accused Cantor of “getting big paychecks” from groups like the Chamber of Commerce for his position:

If I misspoke and said “secretly,” he’s been pretty out in the open. He’s been in favor of the KIDS Act, the DREAM Act, the ENLIST Act [which Cantor blocked in May]…On the amnesty card, it’s a matter of motivation. I teach third-world economic development for the past 20 years, I love all people, I went to seminary before I did my economics, and so you look at the motivation. Why is Eric pushing amnesty? It’s not a big issue in our district, everyone’s opposed to it, and so why is he doing it? And the answer is, ’cause he’s got his eye on the speakership. He wants to be speaker, and big business, right? The Business Roundtable and the US Chamber of Commerce wants cheap labor. So he actually is selling out the people in our district. He’s not representing the district, the will of the people, and he’s getting big paychecks by doing so. So he’s very clear on amnesty.

Brat is, not surprisingly, no fan of the United Nations:

“Common-” anything I’m against. United Nations. Common everything. If you say common, by definition you’re saying it’s top-down. I’m going to force this on you. That’s what dictators do.

His view of who deploys a top-down approach, naturally, includes President Barack Obama:

The left does not believe in diversity. They believe in top-down, I’m going to force my way onto you. Obama is forcing un-diversity onto everybody. It’s not diversity. It’s top down, central planning, on everything.

As Mother Jones’s Timothy Murphy noted, Brat, a libertarian but not a full Randian, and he doesn’t buy the idea that there’s anything dangerous about playing chicken with the debt ceiling. Bring it on, he says.

In November, Brat will face Democrat Jack Trammell, a fellow Randolph-Macon professor, in the general election in this Republican district.

Correction: An earlier version of this article stated Brat was answering a question about Medicare. In fact, he was asked about Social Security Disability Insurance.