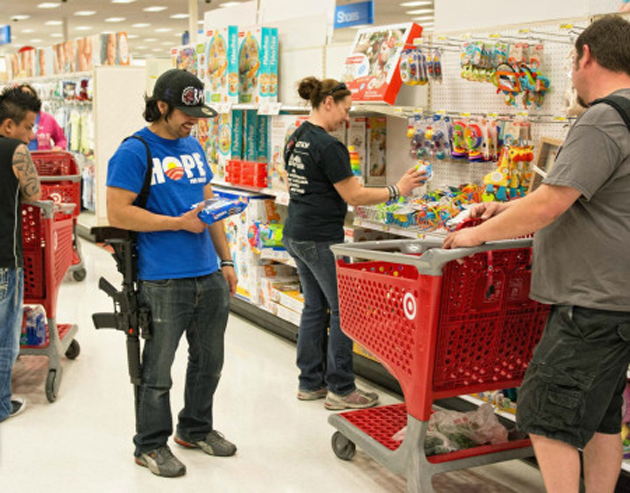 Executives at Target probably never thought much about their red-and-white bull’s-eye logo becoming so fraught, but the mammoth discount retailer now faces the challenge of being the latest corporation pulled into the fight over open-carry gun rights. On Wednesday, the social-media-savvy Moms Demand Action for Gun Sense in America began sharing images of men carrying semi-automatic rifles inside Target stores, including in Texas, where the group Open Carry Texas held a recent demonstration to point up the right under state law to display such guns in public.

Over the last few months Moms Demand Action has pressured more than a half-dozen corporate food and beverage chains into rejecting the open carrying of firearms at their locations, including Starbucks, Chipotle, and Jack in the Box, and most recently Sonic and Chili’s. Large retailers have become the latest front in the battle, including Home Depot last weekend, and now Target.

In March, Open Carry Texas posted images to Facebook of its armed members inside a Dallas-Fort Worth area store, noting that “Target is very 2A friendly.” 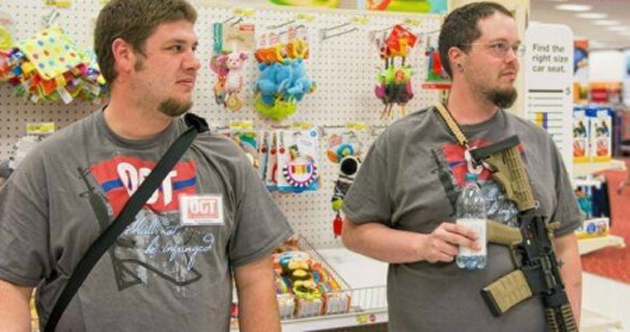 “Hey Mom’s Demand Action! Suck on this!” said another.

Open Carry Texas hasn’t hesitated to get ugly with opponents: As I reported in mid May, the group’s leader has referred to the women of Moms Demand Action as “ignorant, retarded people” and “thugs with jugs,” and its members have harassed and degraded women in disturbing ways.

“We expect to be safe and secure when we wheel our kids around in Target’s red shopping carts,” Shannon Watts, founder of Moms Demand Action said on Wednesday. “We support the Second Amendment, but people walking through the aisles flaunting their loaded weapons is unacceptable. We’re asking one of our country’s largest retailers, a store that American moms flock to, to follow the lead of Chipotle and Starbucks and make a clear statement that open carry of firearms is not welcome in their stores.” 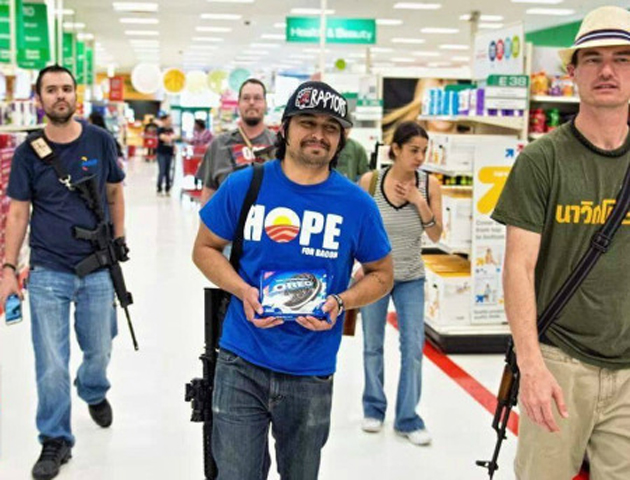 Target appears to have no specific policy regarding guns being brought into its stores. “The safety and security of our guests and team members is our highest priority,” a company spokeswoman told the Wall Street Journal late Tuesday. She further noted that Target does not sell firearms or ammunition, and that the company “is committed to following all state and federal laws.”

Although no state is a greater champion of gun rights than Texas, by late last week it appeared that the National Rifle Association could no longer abide by the antics of Open Carry Texas and its allies. In an extraordinary move first reported by Mother Jones, the NRA issued a lengthy statement denouncing the open carry demonstrations as “foolishness” and “downright weird.” But less than 24 hours later—after the Texas activists pushed back hard and began telling their supporters to abandon the NRA—the gun lobby relented, apologizing for and essentially retracting the whole thing, suggesting it had been the handiwork of a rogue employee. The NRA’s top lobbyist Chris Cox called the post “a mistake” and said that it had been written by “a staffer”—whose identity Cox did not disclose—who’d “expressed his personal opinion.” Cox emphasized that the NRA officially supports open carry and he apologized for “any confusion” the post had caused.