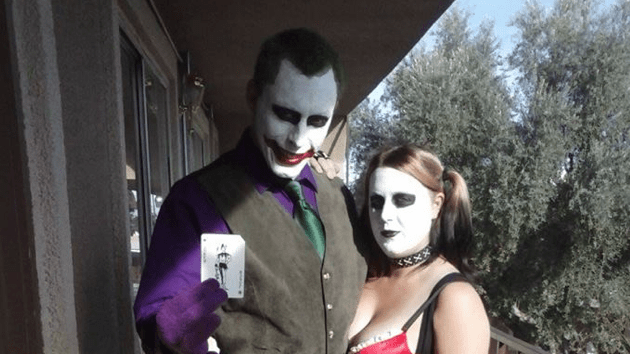 The suspects in Sunday’s shooting spree in Las Vegas that claimed the lives of two police officers and a shopper were a young married couple who espoused extreme pro-gun and anti-government views on their Facebook pages and who had spent time at the ranch of Cliven Bundy, whose standoff with the federal government made him a cause celebre in the so-called “patriot” movement.

The suspects, who killed themselves at the scene of their shooting rampage, have been identified as Jerad and Amanda Miller.

In a chilling Facebook message published a day before the shootings, Jerad Miller declared, “The dawn of a new day. May all of our coming sacrifices be worth it.”

Jerad Miller was eager to support Bundy, who was confronted by federal officials after years of refusing to pay grazing fees. On April 9, he wrote on Facebook:

I will be supporting Clive Bundy and his family from Federal Government slaughter. This is the next Waco! His ranch is under seige right now! The federal gov is stealing his cattle! Arresting his family and beating on them! We must do something. I will be doing something.

During his time on Bundy’s ranch, he told a reporter: “I feel sorry for any federal agents that want to come in here and try to push us around or anything like that. I really don’t want violence toward them, but if they’re gonna come bring violence to us, if that’s the language they want to speak, we’ll learn it.” Not long after the couple made their pilgrimage to Bundy’s ranch, Miller noted on Facebook that he and his wife were asked to leave because of his criminal past:

I was out there but they told me and my wife to leave because I am a felon. They don’t seem to understand that they are all felons now for intimidating law enforcement with deadly weapons. So don’t tell you that they need people. We sold everything we had to buy supplies and quit our jobs to be there 24/7. How dare you ask for help and shun us dedicated patriots.

In a June 2 Facebook post—something of a manifesto—Jerad Miller indicated that he supported the arguments of the anti-government patriot movement that claims freedom and liberty in the United States are currently threatened. He wrote:

We can hope for peace. We must, however, prepare for war. We face an enemy that is not only well funded, but who believe they fight for freedom and justice. Those of us who know the truth and dare speak it, know that the enemy we face are indeed our brothers. Even though they share the same masters as we all do. They fail to recognize the chains that bind them. To stop this oppression, I fear, can only be accomplished with bloodshed. May the best men of our beloved nation stand and fight tyranny, without fear and without regret. May we stand proud as free men instead of kneeling as slaves. May we offer our children a free and just world with our blood, sweat and tears as payment. Let our wives and lovers take vengeance upon our enemies in our absence. We cannot fail in this endeavor of Liberty, if we do we risk leaving our orphaned children to the will of tyrants. We, cannot with good conscience leave this fight to our children, because the longer we wait, our enemies become better equipped and recruit more mercenaries of death, willing to do a tyrants bidding without question. I know you are fearful, as am I. We certainly stand before a great and powerful enemy. I, however would rather die fighting for freedom, than live on my knees as a slave. Let it be known to our children’s children that free men stood fast before a tyrants wrath and were found victorious because we stood together. That we all cast aside our petty differences and united under the banner of Liberty and Truth. May future generations look back upon this time in history with awe and gratitude, for our courage to face tyranny, so that they could live happy and free.

A few days later, Miller shared a photo that proclaimed, “The police have never attacked a pro gun rally.”

On her YouTube page, Amanda Miller liked videos called, “Shooting Cops,” “Citizens Can Shoot Police,” and “When Is It Okay To Shoot a Cop.” She posted a video of Jerad Miller interviewing people at the Bundy ranch. Her Facebook page contains photos of a woman posing with guns and she shared a picture of the “best coffee table ever”—it was a table with a drawer full of guns.

A sample of their posts is below: 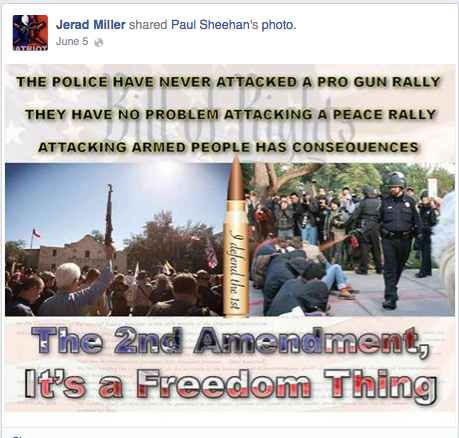 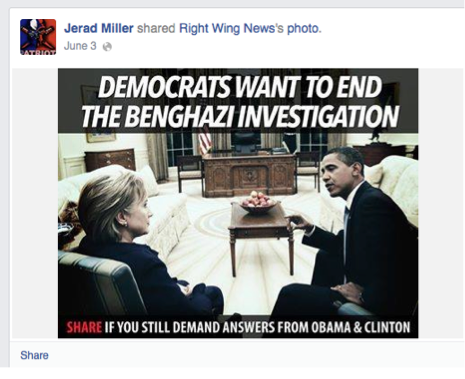 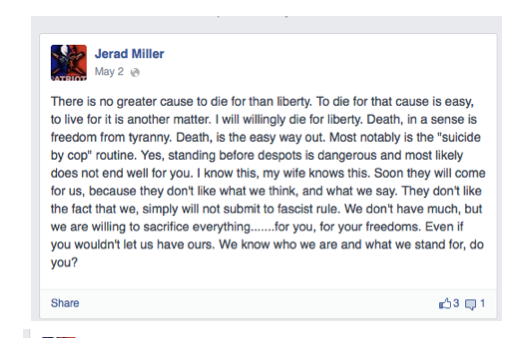 Jerad’s posts about attending the Bundy rally in April: 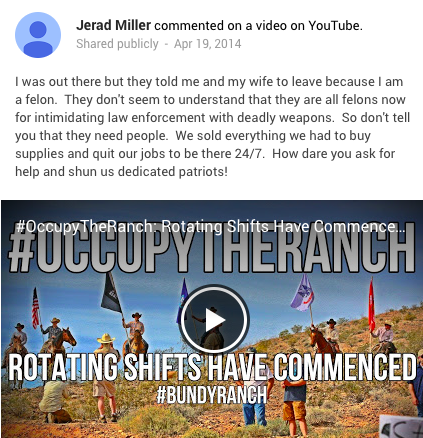 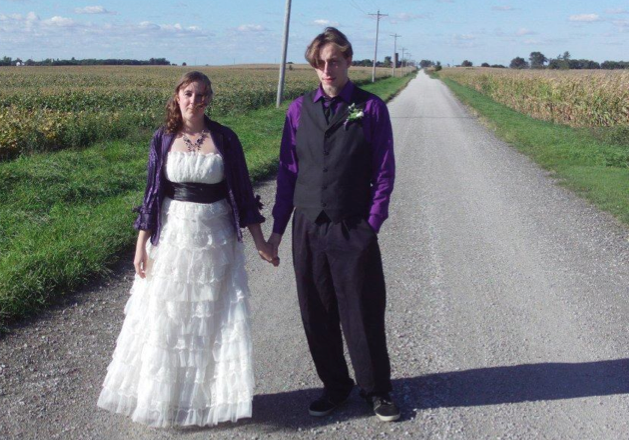