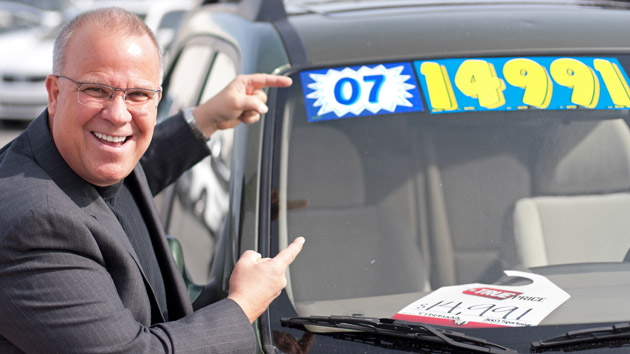 Would you buy a subprime-loan crisis from this man? A new New York Times investigation reveals that used car dealers are doling out giant loans to millions of poor Americans with bad credit. Many of these dealers are using the same negligent lending tactics that subprime mortgage lenders used before the 2008 financial crisis, including ignoring or fabricating information about borrowers’ income, employment, and ability to repay.

Even though this new subprime market is a fraction of the size of the mortgage market, the used-car loan bubble poses substantial risks to banks still recovering from the recession. Delinquent loans are piling up. Banks had to write off an average of $8,541 on each delinquent auto loan in the first three months of 2014, the Times reports. The Office of the Comptroller of the Currency, a federal Wall Street regulator, has warned that banks are taking on too many low-quality auto loans. And it’s not just banks that would be affected if too many used car loans go sour. Auto lenders are pooling bad loans just as subprime mortgage lenders did, and then slicing them up and selling them to investors including hedge funds and pension funds.

One of the main reasons car dealers are courting another subprime meltdown is that congressional Republicans pushed to amend the 2010 Dodd-Frank financial reform bill in order to exempt auto dealers from oversight by the Consumer Financial Protection Bureau (CFPB). Granted, lawmakers from both parties were under lots of pressure from dealers as the massive legislation was being drafted. Between 2009 and 2010, the industry spent nearly $8.5 million on lobbying. The industry argued that because it was part of Main Street, not Wall Street, car dealers didn’t need to be included in the Dodd-Frank bill, which was designed to prevent the kinds of high-finance shenanigans that caused the 2008 financial crisis.

The dealer exemption ultimately “made it into the House bill because Democrats jumped on board,” says one consumer advocate who opposed the provision, “but Republicans were certainly the main driver behind the exclusion.” Rep. John Campbell (R-Calif.), a former Orange County Saab dealer, proposed the amendment to Dodd-Frank that would exclude auto dealers—his former colleagues—from CFPB oversight. On October 22, 2009, the measure came up for a vote in the House financial services committee and passed 47 to 21. Twenty-eight out of twenty-nine Republicans voted in favor, as did 19 of 42 Democrats. The Senate’s version of Dodd-Frank originally did not contain the Campbell amendment. But in May 2010, Republican Sen. Sam Brownback of Kansas introduced a provision that would all but force his colleagues to accept the House’s amendment when the two chambers met to hammer out a final bill.

In a speech on the Senate floor, Brownback repeated the industry’s line. “There’s not a single auto dealer on Wall Street,” he said. “None of them. Not a one. You can go up there today and try to buy a car and you can’t get one. These are Main Street businesses.” The Brownback provision passed 60 to 30, with 37 Republicans, 22 Democrats, and 1 independent (Sen. Joe Lieberman of Connecticut) voting in favor. The dealer exemption stayed in the final bill.

Car dealers are subject to other types of federal financial rules, but if it weren’t for Campbell and Brownback’s efforts, there’d be another watchdog overlooking shady auto dealers, consumer advocates say. The Federal Trade Commission has the authority to crack down on car dealers, but has not yet done so. The FTC is slower to act than the CFPB, advocates say, in part because Congress controls its funding. The CFPB is financed by the Federal Reserve. (The FTC declined to comment on whether it is investigating car dealers’ negligent lending practices, but noted that the agency has previously taken action against dealers “for deceptive and unfair business practices.”)

The CFPB can police dealers indirectly through its oversight of auto lenders who pay dealers a commission for making loans. But because the CFPB has no direct oversight of sketchy car dealers, “abuses continue for longer than they should,” says Chris Kukla, the senior vice president at the Center for Responsible Lending. Lisa Donner, the executive director of Americans for Financial Reform, agrees. If Republicans hadn’t gotten their way, “There’d be a supervisor paying attention in a different way. We might not be seeing what we are seeing now.”