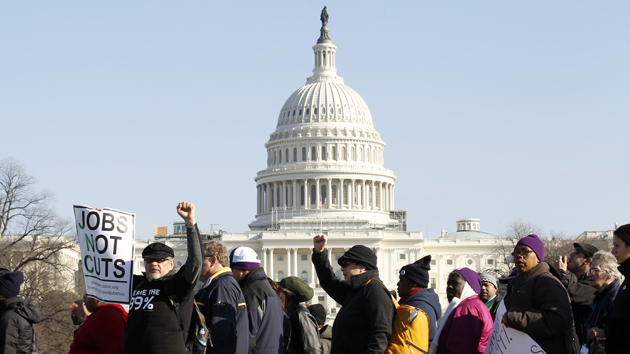 Protestors outside the Capitol in 2011.Jose Luis Magana/AP

It’s been seven months since Congress let long-term unemployment insurance benefits lapse, but last week only brought more bad news for the job seekers hoping that House Republicans might relent and allow a vote on extending benefits. When the House passed a temporary patch to the Highway Trust Fund on Tuesday, they tapped into an idea called pension smoothing to pay for the cost—an accounting trick that changes the formula companies use for contributing to pensions, but a necessary measure since Republicans in the House have refused to approve spending unless it’s offset by new revenue. The only problem? That was the same mechanism Democrats had planned to use to pay for an unemployment insurance bill, leaving liberals at a loss for how to convince the GOP to get on board with an extension of unemployment benefits.

“The Republican majority says suffer some more, families, you deserve it,” Rep. Rosa DeLauro (D-Conn.) said outside the Capitol last Wednesday afternoon. “Stop fiddling while Rome burns, while these folks have nowhere to go.”

DeLauro was one of a string of speakers at the fifth Witness Wednesday event, a regular gathering convened on the Capitol lawn by the Center for Effective Government to highlight the stalled legislation. At the event, a series of Democratic House members—including Minority Whip Steny Hoyer (D-Md.)—and the heads of various nonprofits read letters from unemployed Americans calling for Congressional action. But there was a distinct lack of unemployed people in attendance to speak for themselves; as a spokeswoman for the Center for Effective Government told me beforehand, it’s a constituency that typically lacks the funds to travel to DC to press their cause. (There are plenty of unemployed people in DC, of course, but they also lack elected representation).

The absence of widespread public pressure has been part of Democrats’ problem as they push for renewing benefits. Rep. Dan Kildee (D-Mich.), the sponsor of the House’s unemployment bill, told me he doesn’t think Republicans will budge unless public pressure mounts. “People outside of Washington have to get engaged. We can’t fix it alone.”

When the recession hit and unemployment spiked, members of Congress from both sides of the aisle recognized the dire situation faced by folks looking for jobs. Unemployment insurance typically lasts for 27 weeks, but given the awful economic climate Congress extended that period by at least seven weeks to help the long-term unemployed. (The length of the extension varied by state.) Given the economy’s slow recovery, Congress continued to renew the extension until Republicans refused this past December.

The number of long-term unemployed dropped last month, but there are still 3.1 million people searching for jobs who don’t qualify for insurance. That group represents over 30 percent of the country’s total unemployment rate. And that recent drop in the number of long-term unemployed isn’t entirely good news: many of those stuck without jobs simply give up searching for work and are no longer counted in the government’s statistics. A study by Alan Krueger, a Princeton professor and former member of the Obama administration, found that between 2008 and 2013, just 22 percent of the long-term unemployed had managed to lockdown a full-time job, while 35 percent had stopped looking for work.

In April, the Senate passed a bill written by Sens. Jack Reed (D-R.I.) and Dean Heller (R-Nev.) that would have extended benefits for the long-term unemployed through the end of May and included retroactive payments. But the Republican-controlled House ignored the measure, with House Speaker John Boehner refusing to bring the bill up for a vote. Boehner’s spokesman has even cited the slight drop in the unemployment rate as proof that the insurance extension had been holding back the economy. “More unemployment checks won’t create less unemployment,” the spokesman wrote earlier this month.

Reed and Heller introduced a new, scaled back bill late last month. Unlike their first measure, their new legislation is not retroactive. It costs just $10 million to offer five months of additional benefits to long-term job hunters.

Democrats have turned desperate, looking to hoodwink House Republicans into inadvertently passing unemployment insurance by attaching their bill to various measures likely to pass Congress. First, Reed and Heller tried to attach their unemployment bill onto a bipartisan piece of legislation to reform job training, only to be rebuffed by Sen. Harry Reid (D-Nev.), who didn’t want to muck up the process by adding on extraneous amendments.

But that likely doesn’t matter since that bill—along with Kildee’s companion bill in the house—relied upon pension smoothing to offset costs. “I wish we hadn’t shown them the pay-for,” Kildee says. “It is frustrating.” The congressman said that he would go back to the drawing board and search for a new source of revenue to pair with the insurance extension, but he didn’t sound hopeful that the Republican leadership would allow a vote on the bill, even though he and other Democrats believe there would be enough stray Republicans who would vote in favor of helping the unemployed. “The speaker himself needs to realize that he is the speaker of the House of Representatives, not the speaker of the Republican conference,” Kildee said. “And the House of Representatives would vote for an unpaid-for UI extension.”