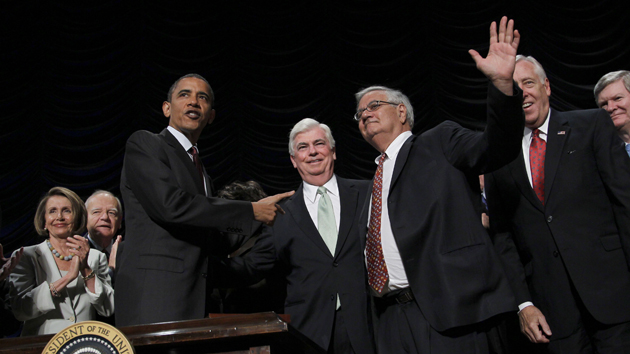 Four years ago today, with a who’s who of congressional Democrats standing over his shoulder, President Barack Obama signed into law the Dodd–Frank Wall Street Reform and Consumer Protection Act, hailing it as the answer to preventing future financial meltdowns. “For years,” the president said at the signing ceremony, “our financial sector was governed by antiquated and poorly enforced rules that allowed some to game the system and take risks that endangered the entire economy.”

But, years later, much of Dodd-Frank has not been implemented and the risks to the economy remain. According to law firm Davis Polk, which has been tracking the law, just 52 percent of the rules mandated by Dodd-Frank have been finalized by federal regulators. Another 23 percent have been proposed but not yet ironed out, and regulators haven’t even gotten around to crafting 96 required rules—24 percent of the total bill. 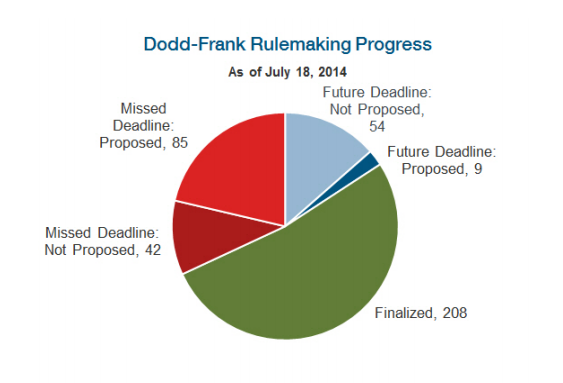 Much of Dodd-Frank remains to be implemented Davis Polk

Former Massachusetts congressman Barney Frank, co-author of the law, isn’t too concerned with the slow rollout. “Not all rules are equal, in the first place,” he said. “In fact, the rules are being steadily approved. And it’s also the case that the financial institutions are abiding by some of those rules in principle even before they’re adopted, because if you’re a large financial institution you’re not going to try to take advantage of a little bit of a delay and then have to stop things when it happens.”

Consumer advocates don’t share Frank’s optimism. While Dodd-Frank laid out a framework for financial reform, the bill left the details to the policy wonks at various federal agencies. And many of those agencies have dragged their heels. A recent report by consumer watchdog Public Citizen called out the Securities and Exchange Commission as a particularly egregious delayer, noting that it had pushed back the deadlines for 13 of the 23 rules it was supposed to finalize this year. “Sorely needed Wall Street reform measures ordered by Congress to protect regular Americans and the markets still have not come to fruition nearly seven years after the financial collapse,” Lisa Gilbert of Public Citizen said in a release announcing the report.

Regulators aren’t entirely to blame, though. Congressional Republicans have done everything in their power to stall the process. They’ve introduced bills to hamper rulemaking and, when that has failed, hamstrung regulators by holding back funding for the agencies, blocking their ability to hire the new employees necessary to write and enforce Dodd-Frank rules.

Federal regulators have also been slowed down by litigation. Eugene Scalia, son of Supreme Court Justice Antonin Scalia, has been leading the financial industry’s legal fight against Dodd-Frank. Scalia and the banks have challenged a host of rules on the basis of cost-benefit analysis, claiming that the government failed to properly assess the impacts of its rules. That argument has found a receptive audience within the DC Circuit, spooking regulators into being extra cautious as they draft their rules and slowing the rulemaking process even further. “It was a legitimate [fear],” Frank says. “It was a threefold thing. The businesses would flood them with comments, the conservative judges would say you have to read those comments very carefully and rebut them, and then [Congress was] not giving them enough money to do it.”

Frank, though, believes that the rulemaking process will run more smoothly now that Obama’s nominees to the DC Circuit can get appointed. Senate Republicans had held new judges hostage, preventing them from taking the bench until Senate Majority Leader Harry Reid nuked the filibuster for federal appointees late last year. “One of the things that helped our bill,” Frank says, “is when Harry Reid got the filibuster rule changed in the Senate so that now nominees to that court can be confirmed who aren’t going to be joining in that conservative bias.”

Even so, the delays mean it may be years before the economy-imperiling risks Dodd-Frank sought to mitigate are fully addressed. Many of the finalized rules are rolled out over time, not immediately keeping the banks in check. Take the Volcker Rule, a much-publicized provision of Dodd-Frank that bans commercial banks from engaging in certain forms of high-risk trading. The long-stalled rule was not finalized until last December, and it won’t take full effect until this time next year.