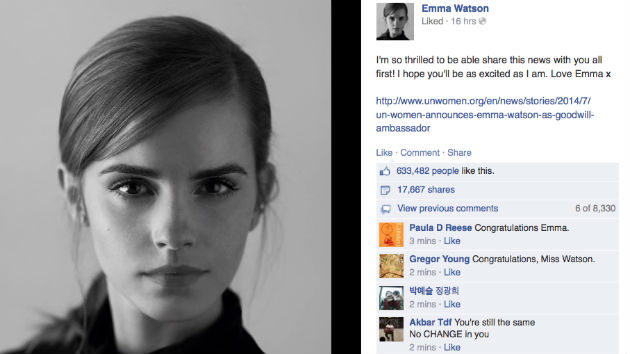 Emma Watson—the humanitarian and staunch feminist who you may recognize from such films as The Bling Ring, Noah, and the Harry Potter movies—is now working with the United Nations on gender equality and female empowerment.

On Monday, UN Women and Watson announced that she had been appointed as a celebrity Goodwill Ambassador. The 24-year-old British actress will work on the “empowerment of young women and will serve as an advocate for UN Women’s HeForShe campaign,” according to the UN Women’s press release. (The HeForShe campaign enlists men and boys to stand up for gender equality.) In 2012, Watson became an ambassador for the Campaign for Female Education.

The announcement drew enough web traffic to crash the UN Women website. “We apologize & hope to be back up soon,” the UN entity tweeted. The site experienced problems for roughly 12 hours following the announcement. “This is the power of [Watson]; she has such global appeal,” UN Women’s Elizabeth Nyamayaro told Mother Jones.

“Ms. Emma Watson is someone who is not only smart, but someone who is very passionate about girls’ issues,” Nyamayaro said, explaining why the UN reached out to the actress in the first place. According to Nyamayaro, Watson is particularly excited about working with HeForShe, and will also support the work of young women across UN Women’s strategic pillars, including economic empowerment, ending violence against women, political participation, and peace and security.

Here is Watson’s full statement on her new gig:

Being asked to serve as UN Women’s Goodwill Ambassador is truly humbling. The chance to make a real difference is not an opportunity that everyone is given and is one I have no intention of taking lightly. Women’s rights are something so inextricably linked with who I am, so deeply personal and rooted in my life that I can’t imagine an opportunity more exciting. I still have so much to learn, but as I progress I hope to bring more of my individual knowledge, experience, and awareness to this role.

(Watson expressed her excitement on Twitter with a blushing emoticon.)

Below is video of Watson visiting slum homes and a fair trade group in Bangladesh: “I still find it hard to convey what fair trade means to those producing our fashion—it’s just so impressive to see how the women have used fair trade clothing to escape poverty and empower themselves and their children,” Watson said. “I was moved and inspired.”