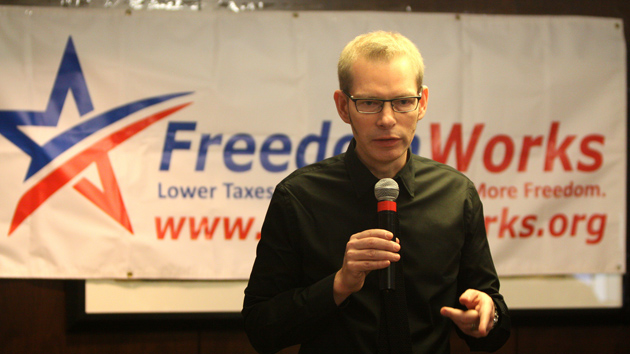 For five years, FreedomWorks has proclaimed itself a leading tea party group fueling the conservative grassroots and fighting establishment Republicans. The organization touts its small-dollar donations from everyday activists, but it also has received substantial funding from corporate donors and one-percenters, most notably Richard Stephenson, a FreedomWorks board member who founded the Cancer Treatment Centers of America. Documents obtained by Mother Jones—including emails, financial records, and fundraising pitches—show that CTCA, in addition to Stephenson, gave money to FreedomWorks, and that Stephenson’s son, Shawn, a Switzerland-based businessman, had a central role in overseeing the Stephenson family’s support of FreedomWorks. The goal, Shawn Stephenson noted in a September 2010 email, was “creating a tsunami of change directed at DC that is and will be historic.” But the documents also reveal that the Stephensons and CTCA expected real returns for the money they pumped into FreedomWorks.

In numerous emails, CTCA officials said they anticipated their FreedomWorks donations would produce tangible benefits for the company. For example, they hoped that FreedomWorks would help CTCA hone its online marketing and outreach skills. (CTCA is a privately held chain of hospitals that treats advanced-stage cancer patients. It reaches new customers largely via TV commercials and digital advertising.) As Shawn Stephenson put it in 2010, “I know there will be benefits that all of CTCA will gain through the work that Freedomworks is pursuing.”

A spokeswoman for CTCA declined to comment for this story. FreedomWorks and Shawn Stephenson did not respond to detailed requests for comment.

Richard Stephenson, who founded CTCA in 1988, is a longtime supporter of libertarian causes. Described by a former FreedomWorks employee as “hard core” and a “true believer,” Stephenson served on the board of Citizens for a Sound Economy, a corporate-funded advocacy group co-founded by the Koch brothers that fought the Clinton administration’s health care reform plan and other initiatives. In 2003, due to internal bickering, Citizens for a Sound Economy split in two. The Kochs broke off to form Americans for Prosperity, and Stephenson, former House majority leader Dick Armey, and the libertarian activist Matt Kibbe launched FreedomWorks.

In a December 2011 email titled “FreedomWorks ROI,” CTCA’s Stephen Bonner discussed how to “do a better job measuring the value we get from [FreedomWorks].”

In Stephenson’s view, FreedomWorks played a crucial role in launching the tea party. As Stephen Bonner, CTCA’s then-president and CEO, wrote in a 2010 email, “Dick credits [FreedomWorks] with much of the Tea Party creation, organization, and effectiveness.” To fuel that uprising, CTCA and the Stephensons pumped millions into FreedomWorks. In the same 2010 email, Bonner noted that CTCA itself gave $1 million to FreedomWorks in 2009, and he added that “it looks likely we will probably commit another $1MM” to fund the group’s 2010 Take America Back business plan.

Also in that email, Bonner explained that Shawn Stephenson, with his father’s backing, “is now leading the next phase of the relationship” between CTCA and FreedomWorks. Shawn Stephenson runs a company named Rising Tide, which, according to its website, manages the intellectual property associated with CTCA and its affiliates. Founded in 2006, Rising Tide is based in the Swiss town of Schaffhausen. Stephenson also chairs the board of two related charities: the Rising Tide Foundation, which funds libertarian causes around the world, and the Rising Tide Foundation for Clinical Cancer Research.

In 1996, CTCA and two affiliated hospitals reached a settlement with the Federal Trade Commission, which had alleged CTCA made “false and unsubstantiated claims in advertising and promoting their cancer treatments.” CTCA, according to the New York Daily News, admitted no wrongdoing, but agreed to include in its marketing materials the disclaimer “You should not expect to experience these results.”

CTCA and the Stephenson family’s donations came with strings attached. In emails, the Stephensons and company executives said they expected their support of FreedomWorks to pay off in tangible ways for CTCA and an affiliated nonprofit, the Gateway for Cancer Research, which Richard Stephenson chairs. In a December 2011 email titled “FreedomWorks ROI [return on investment],” CTCA’s Stephen Bonner discussed how to “do a better job measuring the value we get from [FreedomWorks].” He continued, “The main value I believe has been intended to enhance and advance our online effectiveness.” In another email, as CTCA weighed whether to donate more to FreedomWorks, Bonner wrote that executives should compile a list of “previous investments made in FreedomWorks, and the benefits (hard and soft) derived by CTCA and Gateway.”

Additional emails show that CTCA and Gateway employees traveled to DC to meet with FreedomWorks’ top brass. At least two or three times in a three-year span, FreedomWorks employees flew to a CTCA office in Schaumburg, Illinois, to conduct “working groups” about digital marketing, a former FreedomWorks staffer recalls.

In 2011, a Gateway for Cancer Research employee asked FreedomWorks vice president Adam Brandon to review a detailed plan for building grassroots support online and in the field for Gateway. The email arrived at 10 a.m. on a weekday. Brandon promptly wrote back with a page-long response that began, “I would always clear the decks to help.” (Brandon did not respond to a request for comment.)

Richard Stephenson’s influence extended to FreedomWorks’ political work. According to one former FreedomWorks staffer, Stephenson pushed the group to support Rep. Joe Walsh (R-Ill.) in 2012. Walsh was a tea party firebrand known for his controversial comments about Democrats, President Obama, and black people. “The only reason we got involved with Joe Walsh in Illinois was because Dick Stephenson wanted to help him,” the staffer says. (Walsh lost by 9 points.) Walsh says he assumed FreedomWorks “supported me because of [my] voting record.”

One former FreedomWorks staffer described “a special bond” between Matt Kibbe and Richard Stephenson. Kibbe was treated for testicular cancer at a CTCA facility more than a decade ago, and Matt Kibbe’s wife, Terry, who is a senior adviser to FreedomWorks, advises two Swiss-based foundations chaired by Shawn Stephenson. The Kibbes “were very, very protective of their fundraising relationships,” especially with the Stephensons, another ex-FreedomWorks staffer recalls. FreedomWorks also bought tables at Gateway for Cancer Research galas. For the 2010 gala, Terry Kibbe wrote in a 2010 email, “My plan is to fill the table with Chicago FreedomWorks donors who will hopefully become Gateway donors.”

Terry Kibbe did not respond to a request for comment.

Dick Armey, the former FreedomWorks chairman, resigned in the fall of 2012 after he abandoned an internal fight to oust Kibbe. Armey says he believes the “very extensive relationship” between the Kibbes and the Stephensons allowed Matt Kibbe to take control of FreedomWorks. Armey, who had been the main fundraiser and a top strategist for FreedomWorks, says he suspects that Kibbe deemed him unnecessary to the group once Kibbe had forged a close bond with Richard Stephenson. Not long after Armey’s resignation, FreedomWorks replaced him on the board with Robert T. E. Lansing, a Chicago real-estate investor and a friend of Stephenson.