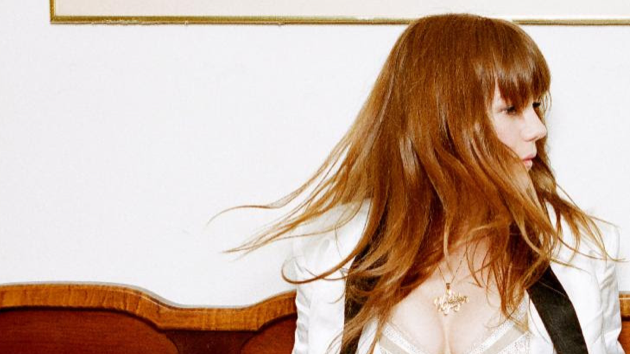 Jenny Lewis, the musician best-known for fronting Rilo Kiley and singing in the Postal Service, has a packed schedule at the Governors Ball Music Festival in New York City, but she never gives off the impression that she’s in a rush. She homes in on every person she’s introduced to with genuine enthusiasm. Lewis is tiny, with long red hair, a mega-watt smile, and a tie-dyed blazer inspired by, “Cosmos, man!”—the television show beloved by geeks that helped inspire her new solo album, The Voyager, out on July 29 (stream it here.)

The Voyager is a frank examination of womanhood, buried under a layer of sugary alt-pop. Lewis is largely known for her songwriting, often about relationships, and this record is no different: She covers topics like late bloomers, “When I turned 16, I was furious and restless,” troubled romances, “I told you I cheated and you punched through the drywall,” and marriage, “I could love you forever. I could love you until all the Polaroids fade.”

Lewis’s music video for the album’s first single, “Just One of the Guys,” is a star-studded affair, featuring her friends Anne Hathaway and Kristen Stewart all dolled up—but as men. The song is a partly a meditation on ticking clocks (“When I look at myself, all I can see/I’m just another lady without a baby.”) Lewis tells me her lyrics speak for themselves and there is, “that lady pressure, as you called it, that is just biological in some ways.” She adds that, “Despite hanging out with dudes for my entire life and trying to fit in, ultimately, I’m a woman, and I’m becoming more comfortable with that the older I get.” She adds, “I’ve fought to be where I am today, and I’m absolutely a feminist.”

Lewis wrote the album, her first solo record since 2008, while struggling with a two-year bout of insomnia that she says almost took her out of the game. “I became an asshole,” she jokes. While sleepless nights didn’t really help her creativity, they did prompt her to watch a lot of late-night boxing and Cosmos, the television series by Carl Sagan, which became inspiration for her album. “I would watch that over and over and some that imagery really made it into the songs,” she says. Which isn’t to say that the title track is “a science fiction song.” Instead, it’s more about personal voyages. As she sings, “Nothing lasts forever when you travel time/ I’ve been sipping that Kool-Aid of the cosmos.”