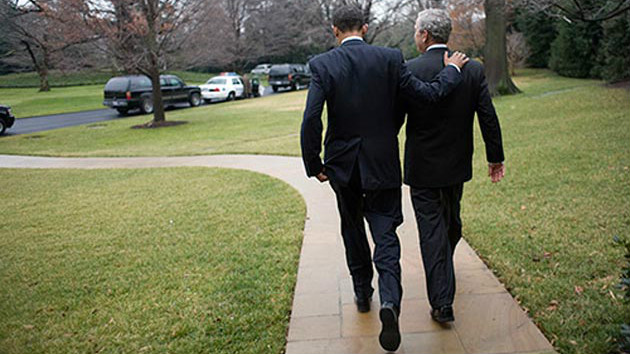 During the 2008 presidential campaign, Barack Obama hammered George W. Bush for expanding government secrecy. Obama promised that his would be the most transparent and open administration ever. In particular, Obama criticized the Bush administration’s use of a legal loophole known as the state secrets privilege. Citing this privilege, government lawyers can keep evidence and testimony from being introduced in court that would reveal government secrets. That means that if someone sues the government for wrongdoing—say, a plaintiff claims that he or she was illegally spied on or tortured at the behest of the US government—the Justice Department can claim key pieces of evidence will expose national security secrets and prevent this material from being used in court. Doing so would hinder or outright squash the person’s case.

In 2008, Obama griped that the Bush administration invoked the state secrets privilege “more than any other previous administration” and used it to get entire lawsuits thrown out of court. Critics noted that deploying the state secrets privilege allowed the Bush administration to shut down cases that might have revealed government misconduct or caused embarrassment, including those regarding constitutionally dubious warrantless wiretapping and the CIA’s kidnapping and torture of Khaled el-Masri, a German car salesman the government had mistaken for an alleged Al Qaeda leader with the same name. After Obama took office, his attorney general, Eric Holder, promised to significantly limit the use of this controversial legal doctrine. Holder vowed never to use it to “conceal violations of the law, inefficiency, or administrative error” or “prevent embarrassment to a person, organization, or agency of the United States Government.”

Despite this promise, Obama continued to assert the privilege to squelch cases about Bush-era abuses. In one instance, the Justice Department scuttled a lawsuit brought by a man who claimed he had been kidnapped by the CIA and had his penis and testicles cut with a scalpel in a Moroccan prison. And now Obama is broadening the use of this legal maneuver: In the past 18 months, the Obama administration has twice cited state secrets to prevent federal courts from considering lawsuits challenging its use of the no-fly list.

The roots of one of these cases stretch back to early 2011, when then-19-year-old Gulet Mohamed called the New York Times from Kuwait with a wild story. Mohamed claimed he had been snatched by Kuwaiti secret police at Kuwait’s airport and beaten and interrogated in a secret Kuwaiti prison. Now, he told the Times, he was locked up in a Kuwaiti deportation facility, where he had acquired a cellphone from another inmate. He alleged the US government was behind his detention. He claimed that FBI agents were questioning him in Kuwaiti custody, denying him access to a lawyer, and telling him he was on the no-fly list and wouldn’t be released unless he cooperated. After his plight made national news, Kuwaiti officials took him to the airport, where he was able to board a flight back to the United States. (The no-fly list is an ever-changing registry that affords authorities discretion. So if he was on the list, a decision was made to allow him to make this trip.) When Mohamed returned to the United States, he was interrogated—again without being given access to a lawyer—at Dulles International Airport. He was never charged with a crime.

In January, after three years of litigation, a federal court in Virginia declined the Justice Department’s request to dismiss Mohamed’s case on procedural grounds. That’s when the Obama administration turned to what Mohamed’s lawyer, Gadeir Abbas of the Council on American-Islamic Relations, called “the litigation equivalent of the nuclear option”—the state secrets privilege. In a document filed with the court in late May, Holder argued that Mohamed’s case should be thrown out entirely because continuing the case would expose US government secrets.

“The FBI isn’t the secret police, or at least it isn’t supposed to be,” says Mike German, a former FBI agent who’s now a fellow at the Brennan Center for Justice at New York University. “Such excessive secrecy demands, especially where an American is alleging a violation of his civil rights, undermines the rule of law the FBI and Justice Department are supposed to be defending.”

There is some good news for Mohamed: The state secrets dodge may not work. Last April, Holder filed a nearly identical declaration in Ibrahim v. Department of Homeland Security, a no-fly lawsuit brought by Rahinah Ibrahim, a Malaysian college professor who was detained at San Francisco International Airport in 2005. The judge in that case didn’t buy Holder’s argument, and allowed the case to move forward. Eventually, an FBI agent testified to the court that he had placed Ibrahim on the no-fly list by mistake, and in January, she became the first person to successfully challenge her no-fly list status in court when the judge ruled that the government had to remove her.

The Supreme Court created the state secrets privilege in a 6-3 decision in 1953, when it ruled in United States v. Reynolds that the US Air Force didn’t have to release its accident reports from the crash of a B-29 Superfortress to widows of the men killed in the disaster because doing so would reveal classified information about secret equipment. When the accident reports were finally released in 2000, they contained no information about the secret equipment—only evidence of negligence by the Air Force. Critics—including the daughter of one of the men killed in the crash—said this showed that the privilege was used to cover up government mistakes and misconduct, not to protect secrets.

United States v. Reynolds wasn’t the last time the state secrets privilege shielded the government from accountability. For decades, the military and the US intelligence community tested captured Soviet technology—and experimental new technology—at a secret base in the Nevada desert. The facility, near Groom Lake, produced huge amounts of secret, allegedly toxic trash, which the government disposed of by throwing it into giant open pits and setting it on fire. This allegedly made many of the base workers sick. During the 1990s, these workers tried to sue. The military denied the base existed, cited the state secrets privilege, and succeeded in getting the case thrown out. Most of the plaintiffs died of cancer before August 2013, when the government finally declassified the name of the base that it had previously said didn’t exist: Area 51.

It took four decades for the families who sued the government in Reynolds to find out the truth; the Area 51 workers who sued during the Clinton administration had to wait until well into Obama’s second term before the government even admitted the existence of the base that allegedly sickened them. Given the history, Mohamed’s quest for the truth behind his detention in Kuwait seems destined to be a long one.