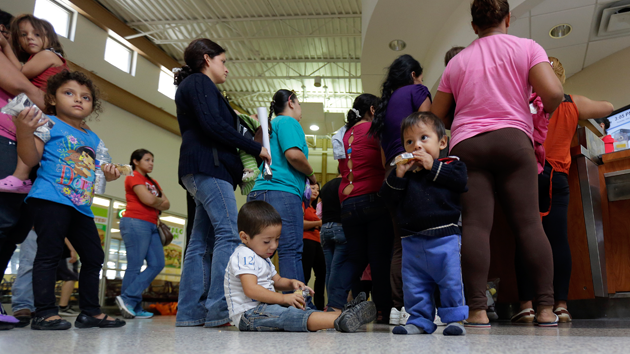 Undocumented immigrants at the bus station after they were released from a US Customs and Border Protection processing facility in McAllen, Texas.Eric Gay/AP

Clay Jenkins, a Democrat elected Dallas County judge in 2010, has a controversial plan for handling the recent massive influx of unaccompanied child migrants coming to Texas. Instead of immediately sending them back to where they came from, as Texas Gov. Rick Perry supports, or blocking buses from transferring migrants to local Border Patrol stations, as protesters in Murrieta, California, did recently, Jenkins wants to provide them shelter. His plan, which would be funded by President Obama’s emergency appropriations request, would allow temporary housing in the Dallas area for up to 2,000 unaccompanied migrant children.

Over the weekend three potential sites—two schools and a hospital—were inspected for use, and their doors could open for kids as soon as the end of this month. Mother Jones spoke with Jenkins about why he thought North Texas should help, how local residents are responding, and how he might reply to Perry, who plans to discuss the crisis Wednesday in Dallas with President Obama.

Mother Jones: How did you first become aware of this crisis, and how did you decide you had to get involved?

Clay Jenkins: I first saw media reports, and in my family we discuss what’s going on with our lives. So I was telling my eight-year-old daughter that I was struggling with this because I felt that we needed to do something for these children. But at the same time it was a very complex problem.

She was asking why all the children were being detained on the border, and I was explaining it was for her security and protection. She explained to me, “But daddy, these aren’t people, these are children.”

So that stuck in my mind, and I decided that this is something that couldn’t wait. We had the capability and the capacity in Dallas County, where there’s 2.5 million people. We have buildings that are vacant right now, and I know that our community has compassion. So I decided that there’s no good reason not to help these children, and that it’s time to stand up for these children.

“I saw children [at a detention center] sitting quietly crying, and other children looked zoned out. They were all dirty. And they clearly needed our help.”

MJ: You recently visited an immigration holding center in McAllen, near the Mexico border. Why did you decide to visit, and what did you find there?

CJ: I received reports from the White House and members of the faith community, the Border Patrol, and the Highway Patrol, but I wanted to get a firsthand look. And what I saw were children younger than one crying for their mother, while Border Patrol agents changed their diaper and tried to comfort them.

I saw siblings separated into holding cells that looked like the drunk tank in the county jail. It was designed to hold about six adults but had over 20 kids in them. I saw their faces pressed into glass as they looked across the area towards their siblings who were in other cells. I saw children sitting quietly crying, and other children looked zoned out. They were all dirty. There was a distinct smell of body odor there. And they clearly needed our help, so it just steeled my resolve to do what we can do to help these children.

MJ: The Dallas Morning News quoted you as saying, “If this is a political move, then I am the stupidest person in Texas.” Are you worried about the political backlash?

CJ: There’s a lot of upset people, and I think elected officials on some issues can’t be worried, can’t put political interest ahead of public interest. When it comes to children who are being treated in an inhumane way, then you forge ahead. These children couldn’t wait for the first Wednesday in November for someone to help them.

MJ: What do you say to activists like those in Murrieta, California, who block buses filled with immigrant detainees headed for their city, or the mayor there, Alan Long, who has urged deportation?

CJ: I respect their opinion and I understand their fear, but these are children—they are precious children. They’re not a thing to be feared. They’re people to be embraced. And people for us to help. This isn’t about immigration reform, or border fences, or amnesty. This is about children.

“This isn’t about immigration reform, or border fences, or amnesty. This is about children.”

And my goal is to take children from overcrowded detention facilities on the border and put them in compassionate care here in Dallas County. And put some degree of normalcy back in their life. And let them know that at least here in North Texas there are people who love them and value them and don’t see them as aliens—we see them as children.

MJ: What did you learn from local residents after knocking on doors Sunday near one of the schools that could be a shelter?

CJ: I didn’t have a singular person who answered their door and said, “Not in my backyard.” All of them said, “I want to help these children.” I really appreciated that.

Calls to my office, and emails, and things of that nature, run about 50-50, but most calls against this are from people who don’t live in Dallas County. In fact, I get calls from all over United States and emails against it from all over the United States. But I think here in North Texas we’ve got a good capacity to be compassionate and to help. We are always a port in the storm, literally, for hurricane victims, because we are the largest metro area in the South that’s not on the ocean. We have 7 million people in four counties, Dallas being the largest. So our people are good at this.

MJ: How did you settle on 2,000 kids? And will the shelters only house unaccompanied children?

CJ: At this time we only plan to use it for unaccompanied children, and to be honest with you, I picked the number because that doubles the capacity at Lackland [Air Force Base] and Fort Still [Army Base]. And I felt like it was an ambitious enough goal to try to double the capacity to help these children and twice as many beds in 30 days.

MJ: There are reports about a meeting between President Obama and Gov. Perry on Wednesday. Are you attending the meetings?

MJ: How do you plan on responding to Gov. Perry based on his opinions about the surge?

CJ: I know that Gov. Perry is a compassionate person. We have worked well together in disasters before. We disagree on almost every partisan political issue, but my hope for Gov. Perry is that he won’t see this as a partisan political issue, that he’ll see this for what it is, precious children in need of our help. And this is Texas, and in Texas, we don’t turn our back on children.