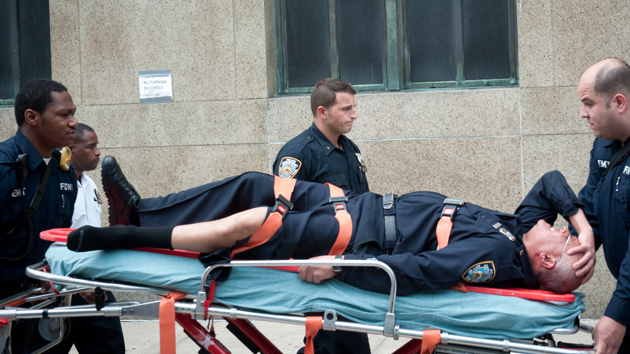 The nation’s biggest cellphone carriers, including Verizon, AT&T, and Sprint, are opposing a government proposal that aims to save lives by making it easier for emergency responders to locate 911 callers. The companies say they lack the technology to implement the plan—which would require them to quickly find a way to deliver more accurate location information—and they’re working on a better, long-term solution. Emergency responders and activists say that the cell carriers are trying to stymie the proposal because they don’t want to pony up the money for the improvements.

Under current Federal Communications Commission (FCC) rules, carriers must provide a 911 caller’s latitude and longitude within 164 to 984 feet. But these rules, last revised in 2010, were never designed to apply to cellular calls placed inside buildings, where cellphone technologies, like GPS, are less likely to work. Now that many Americans don’t own landlines, emergency responders are finding that it’s increasingly difficult to track down 911 callers inside apartment and office buildings. “This spells a real potential disaster for the delivery of emergency services,” says Paul Linnee, who has over 40 years of experience designing and managing 911 systems, and now works as a consultant.

The FCC proposal, released in February, would mandate that, for 67 percent of 911 calls in the first few years, cellphone carriers provide the horizontal location of an indoor caller within 164 feet and the vertical location (i.e., the floor in an apartment building) within about 10 feet. The proposal would also require providers to demonstrate compliance and establish a channel for 911 administrators to raise complaints.

Last year, Steve Souder, the director of the department of public safety communications in Fairfax County, Virginia, demonstrated to a former FCC head that when he called 911 from his dispatch center, the location that came back was the meat department in a nearby Costco. In California, an organization that advocates on behalf of dispatchers looked at millions of wireless calls placed across the state and found that more than half failed to transmit precise location data. In San Francisco, the failure rate was more than 80 percent.

Cellphone carriers contend that recent studies give a misleading picture of their accuracy rates, because they don’t take into account cases in which 911 call centers don’t retrieve the data provided by the carriers, for any number of reasons. And in numerous comments submitted to the FCC—which the commission is currently reviewing—the companies argue that the plan is simply not feasible.

On July 14, Sprint wrote to the FCC that its proposal is “not achievable using current technology” and that there is little evidence “that the technology will be available in the near future.” AT&T called the FCC’s proposed timeline for improving location-finding technology “unrealistic” and wrote that forcing providers to “incrementally” improve their systems will “waste scarce resources (i.e., time, talent, and money).”

Don Brittingham, the vice president of national security and public safety policy at Verizon, tells Mother Jones that Verizon and other carriers are already implementing new technologies that will significantly improve accuracy. He says that even if the FCC’s requirements could be met at some point in time, the proposal would risk directing valuable resources away from the long-term goal—delivering a specific, accurate address to emergency dispatchers. “Instead of putting a lot of money and time and effort into a set of solutions that may not actually help, we would like to see more focus on things that provide some long-term benefits,” he says.

Jamie Barnett, former head of the FCC’s public safety and homeland security bureau, is directing a large coalition of emergency responders and activists—initially funded by True Position, a company that makes GPS technology—to rally support for the FCC proposal. He says that multiple technologies are currently available that fit the FCC’s criteria, but cell companies just don’t want to pay for them. “Carriers are currently negotiating to delay and weaken the implementation of this lifesaving rule. While it would save the carriers money, it could cost tens of thousands of additional lives,” he says.

Linnee recalls that in the late 1990s, cellphone carriers fought the FCC on providing any 911 location information at all. “The wireless carriers were kicking and screaming and squawking that this can’t be done,” He adds, “This is standard industry behavior. They fight you every inch of the way.”