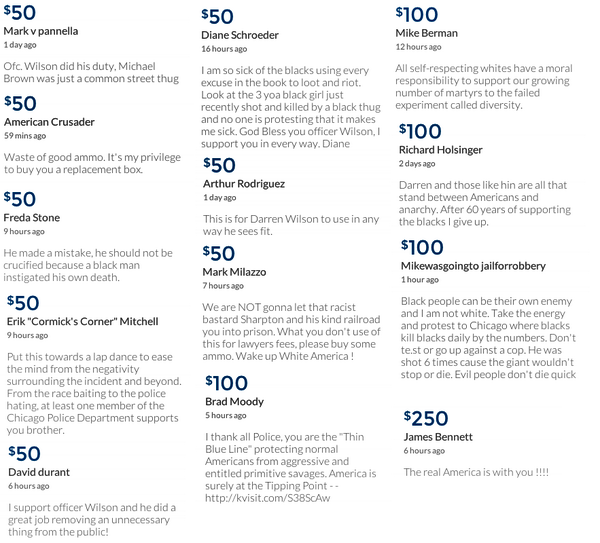 Update, 8/22/2014: A representative from the Support Officer Darren Wilson campaign declined to comment. On its Twitter account, GoFundMe announced late Thursday evening that some comments on the campaign page had been removed for violating the company’s terms of use. And on Friday afternoon, the campaign page was shut down and a new one was created. Buzzfeed reports:

The original donation page to support the Ferguson, Mo., police officer who shot Mike Brown has been replaced with a charity, which appears linked with a local police union.

A long message to the Support Officer Wilson GoFundMe page was posted Friday afternoon, noting that donations will now go directly to a 501c3 charity called Shield of Hope, which the post says is designated “the authorized charity for donations on behalf of Darren Wilson.”

The comments seen in the image above were written by donors to the online fund set up to support Darren Wilson, the cop who shot Michael Brown six times in Ferguson, Missouri, last week. Wilson has since been placed on paid administrative leave and is in an undisclosed location. The GoFundMe campaign to assist him was set up earlier this week by an unnamed supporter. “We stand behind Officer Darren Wilson and his family during this trying time in their lives,” the page reads. It has since raised nearly $150,000.

Among the comments left by donors:

“Ofc. Wilson did his duty. Michael Brown was just a common street thug.”

“Waste of good ammo. It’s my privilege to buy you a replacement box.”

“Black people can be their own enemy and I am not white…He was shot 6 times cause the giant wouldn’t stop or die. Evil people don’t die quick”

“All self-respecting whites have a moral responsibility to support our growing number of martyrs to the failed experiment called diversity.”

“I am so sick of the blacks using every excuse in the book to loot and riot.”

“I support officer Wilson and he did a great job removing an unnecessary thing from the public!”

The collection of comments above was compiled by Jon Hendren, a comedy writer in San Jose, California. Hendren told Mother Jones that he took screenshots of the comments on the page that seemed especially offensive and compiled them into one image using Photoshop. “There were maaaany more that were borderline or ambiguous or a small dollar amount that I would’ve also captured, but I got so annoyed that I began to get a headache, so I stopped when I did,” he explains.

“A couple folks have asked me to wait until we know all the facts before passing judgment, which is kind of absurd,” says Hendren. “People are donating money with racist sentiment and to celebrate a killing—I’m not sure what other facts I should be waiting for. The vast majority expressed disgust and revulsion though.”

I’ve asked the creator of the GoFundMe page to comment. I’ll update this post if I hear back; she told The Daily Beast earlier this week that she is not speaking with the press.