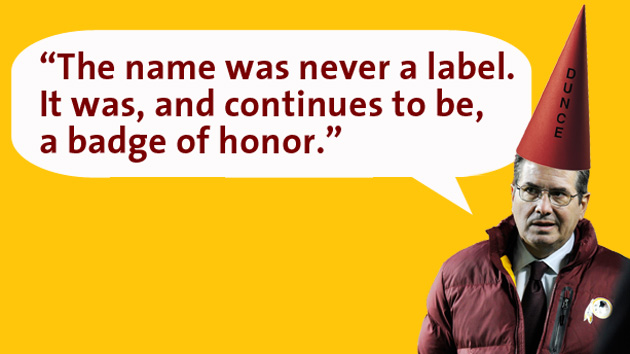 A year ago, I explained Mother Jones‘ decision to stop using the name of Washington, DC’s pro football team, both online and in print. We joined Slate and The New Republic in doing so, and since then, a number of other news organizations and journalists have followed suit.

Even as more people have spoken out against the team’s derogatory moniker—everyone from President Obama to Gene Simmons—owner Dan Snyder hasn’t given an inch, repeatedly arguing that it’s simply not offensive. This week he even went on a mini media tour, giving radio and TV interviews as NFL training camps kicked into gear.

In the meantime, Snyder has doubled down on his commitment to keeping the R-word. Here’s a list of some of the dumbest things he’s said about it in the last year (as well as some additional reading, for context):

“It is a symbol of everything we stand for: strength, courage, pride, and respect—the same values we know guide Native Americans.”

In an October letter to season ticket holders: “The name was never a label. It was, and continues to be, a badge of honor…It is a symbol of everything we stand for: strength, courage, pride, and respect—the same values we know guide Native Americans and which are embedded throughout their rich history as the original Americans.”
(See also: “Often Contemptuous” and “Usually Offensive”: 120 Years of Defining “Redskin”)

In a March letter to season ticket holders, following months of criticism (including this Super Bowl ad): “I’ve been encouraged by the thousands of fans across the country who support keeping the Redskins tradition alive. Most—by overwhelming majorities—find our name to be rooted in pride for our shared heritage and values.”
(See also: “Dan Snyder to Native Americans: We’re Cool, Right? Native Americans to Dan Snyder: [Redacted]”)

Following an April ceremony at a Virginia high school: “We understand the issues out there, and we’re not an issue. The real issues are real-life issues, real-life needs, and I think it’s time that people focus on reality.”
(See also: “Washington NFL Team’s New Native American Foundation Is Already Off to a Great Start”)

In a Monday interview with former Washington player Chris Cooley on ESPN 980, the radio station Snyder owns: “It’s sort of fun to talk about the name of our football team because it gets some attention for some of the people that write about it, that need clicks. But the reality is no one ever talks about what’s going on on reservations.”
(See also: “Outrage in Indian Country As Redskins Owner Announces Foundation”)

More from the Cooley interview: “It’s honor, it’s respect, it’s pride, and I think that every player here sees it, feels it. Every alumni feels it. It’s a wonderful thing. It’s a historical thing. This is a very historical franchise…I think it would be nice if, and forget the media from that perspective, but really focus on the fact that—the facts, the history, the truth, the tradition.”
(See also: “Former Redskins Player Jason Taylor Says Redskins Name Is Offensive”)

In a Tuesday interview with ESPN’s Outside the Lines: “A Redskin is a football player. A Redskin is our fans. The Washington Redskins fan base represents honor, represents respect, represents pride. Hopefully winning. And, and, it, it’s a positive. Taken out of context, you can take things out of context all over the place. But in this particular case, it is what it is. It’s very obvious…We sing ‘Hail to the Redskins.’ We don’t say hurt anybody. We say, ‘Hail to the Redskins. Braves on the warpath. Fight for old DC.’ We only sing it when we score touchdowns. That’s the problem, because last season we didn’t sing it quite enough as we would’ve liked to.”
(See also: “Timeline: A Century of Racist Sports Team Names”)