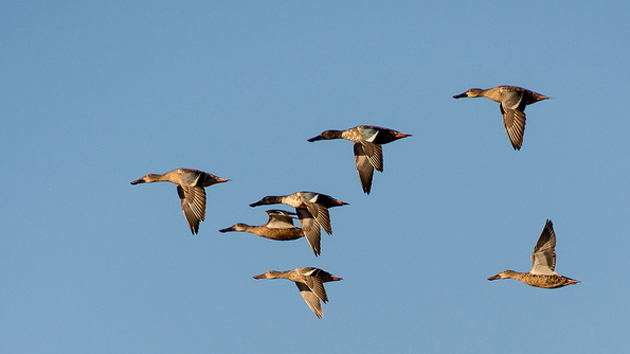 The Minnesota Vikings’ new football stadium was supposed to be a point of pride for fans. The $1 billion state-of-the-art facility in the heart of downtown Minneapolis is set to be completed in 2016, and will put the crumbling Hubert H. Humphrey Metrodome out of its misery. But a number of groups are getting angrier about a darker side to this dream project: The stadium’s shiny glass walls, which are almost certain to pose a lethal hazard to migrating birds.

The Mississippi River is just blocks away from the structure, and it’s a superhighway for seasonal migration. 250 different species of birds—mostly small songbirds like sparrows and warblers—migrate through Minnesota every year by the hundreds of thousands. When they saw the plans for the new stadium, said Matthew Anderson of Audubon Minnesota, “we realized immediately the potential this had to be a death trap.” Migrating birds will get tricked by the stadium’s glass walls; thinking they’re just more sky, the birds will slam into them at high speeds. (Check out artists’ renderings of the stadium here.)

At first, Anderson says, the Vikings organization and the Minnesota Sports Facilities Authority overseeing the project seemed eager to fix the problem. They agreed to lighting restrictions that would make the area safer for birds at nighttime, for one. As for the transparent walls, the fix was relatively cheap: A different kind of glass—with lots of small dots that signal to birds it’s a hard surface—would cost just over a million dollars extra. That’s one-tenth of one percent of the total cost of the project. Plus, the Vikings had already contracted with the manufacturer of this special glass—a Minnesota company to boot.

But on July 17, Anderson said, the Vikings and MSFA balked, claiming the special glass would make the project too expensive. The improvement had seemed like a PR slam dunk. Now, the Vikings’ resistance puts them squarely at odds with a growing trend of eco-friendliness in stadium construction. For instance, several structures constructed in recent years have achieved some degree of LEED certification, including Minneapolis’ Target Field, home of MLB’s Minnesota Twins.

It’s not just Audubon making a stink about the Vikings’ decision. Politicians have taken interest in the controversy. Minnesota State Representative Phyllis Kahn (DFL-MN), whose district is adjacent to the site of the new stadium, chairs the state legislature’s Legacy Committee, which finances conservation-related projects. She said there’s a state law that mandates bird protection measures if a project is financed by state bonds—the new stadium is getting $468 million worth of them. (MSFA officials claim that because the project was approved before the law was passed, they are exempt.) Meanwhile, the Minneapolis City Council passed a resolution on Friday to support the push for bird-safe glass.