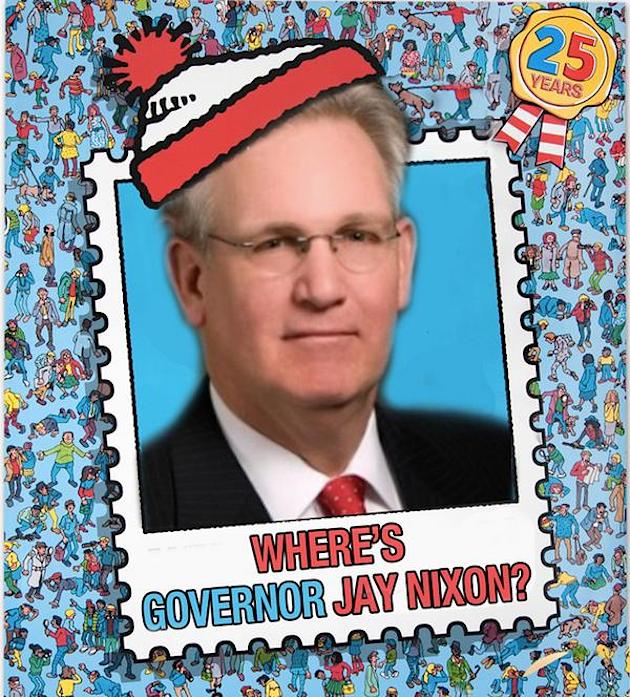 @darth says it all @darth/Twitter

Five days ago, Ferguson, MO, cops shot and killed unarmed teenager Michael Brown, and the outrage of area residents—and the country—has grown day by day. Jay Nixon, the Democratic governor of Missouri whose name has been floated as a possible 2016 candidate (VP or, if Hillary doesn’t run, even presidential), has been notably absent. Yesterday he finally issued a brief statement. And today, as St. Louis County Police fired rubber bullets and tear gas canisters at protestors and arrested reporters from the Washington Post and the Huffington Post, he’s been silent on the conflict.  So I wondered:

And I’m far from alone. Here’s a small sample:

Odder still that Missouri’s Democratic governor Jay Nixon is AWOL. Maybe some of those cops can search for him.

.@GovJayNixon Your citizens are being shot at, gassed and having their constitutional rights impeached upon. Why aren’t you doing anything?

Governor Jay Nixon….. anything from him… Buehler….. Buehler…

Huh, looks like @GovJayNixon has gone missing. No leadership apparent in the state of Missouri. #Ferguson

Where is the governor of Missouri? @GovJayNixon.

Apparently @govjaynixon‘s phone minion has decided to just not answer the phone at the governors mansion. Unreal.

Is @GovJayNixon hiking the Appalachian Trail?

Are you going to speak up on the situation in your state or nah? @GovJayNixon

Where is @GovJayNixon? Where is the Governor? Who is in charge in #Ferguson? Who do the people of #Ferguson turn to?

ok kyle RT @kylefeldscher: can you photo shop Jay Nixon onto a Where In The World Is Carmen Sandiego pic.twitter.com/39idfeoDb3

Police have taken over #Ferguson. Where is @GovJayNixon?

Hello @GovJayNixon!!! Have you ever heard of the late Gov. George Wallace? If not, google him! #Ferguson #MikeBrown

Could the Gov. of Missouri’s political intentions to be Hillary Clinton’s VP what makes him MIA in #Ferguson??? http://t.co/N85BFuO5kI v

Guess we can rule out one person as a 2016 challenger: Missouri Governor Jay Nixon.

Update: Looks like he finally heard all the criticism:

Canceling all appearances at the @MoStateFair to visit North #STL County tomorrow. Statement to follow.

“The worsening situation in Ferguson is deeply troubling, and does not represent who we are as Missourians or as Americans. While we all respect the solemn responsibility of our law enforcement officers to protect the public, we must also safeguard the rights of Missourians to peaceably assemble and the rights of the press to report on matters of public concern.

“I have been closely monitoring the situation and will continue to be in communication with local leaders, and I will be in north St. Louis County tomorrow. As Governor, I am committed to ensuring the pain of last weekend’s tragedy does not continue to be compounded by this ongoing crisis. Once again, I ask that members of the community demonstrate patience and calm while the investigation continues, and I urge law enforcement agencies to keep the peace and respect the rights of residents and the press during this difficult time.”

Sure I’m not the only one wondering why he isn’t in north St. Louis County tonight.