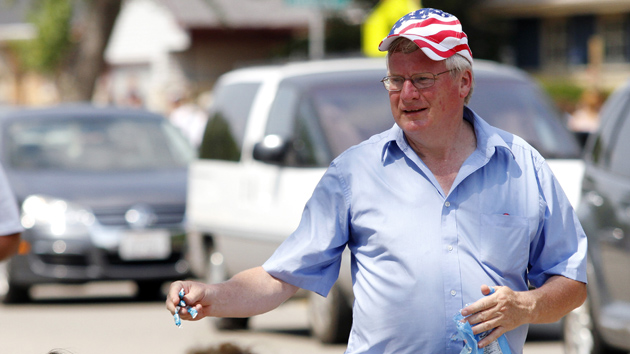 Glenn Grothman, a Republican state senator who is on track to be the next congressman from Wisconsin’s 6th district, has never been shy about speaking his mind. He’s a bomb-thrower, a perpetual outrage machine for his liberal opponents, and a gift to the local and national press corps.

Grothman briefly stepped onto the national stage during the 2011 protests against Republican Gov. Scott Walker’s effort to curb public workers’ bargaining rights. He was one of the most outspoken critics of the anti-Walker protesters. On MSNBC, he derided those protesting the bill as “a bunch of slobs” and compared those who occupied the state Capitol to “college students and hangers-on having a party.”

In August, Grothman surprised many, including some in his own party, by squeezing out the narrowest of victories in the GOP primary in his overwhelmingly Republican district, which includes Oshkosh and Fond du Lac. Referring to Grothman’s previous remarks about women, one Republican operative tweeted, “Gee, so glad we nominated the guy w/ a reputation of being a misogynist in #WI06 w/ both our Gov and AG candidates down vs women.”

Uncharacteristically, Grothman has gone silent since his primary victory. (His campaign did not respond to requests for comment.)

Here is a roundup of what might be called his greatest hits. Read them and remember that Grothman is likely headed to Congress.

Days off from work are “a little ridiculous”: In January, Grothman proposed rolling back a Wisconsin law requiring employers to give workers at least one day of rest per week. He told the Huffington Post the existing state law was “a little goofy” and his proposal was about “freedom.” “Right now in Wisconsin, you’re not supposed to work seven days in a row, which is a little ridiculous because all sorts of people want to work seven days a week,” he said.

“Money is more important for men”: After voting in 2011 to repeal Wisconsin’s equal-pay protection law, Grothman argued that the male-female pay gap wasn’t about discrimination in the workplace. “Take a hypothetical husband and wife who are both lawyers,” he told the Daily Beast. “But the husband is working 50 or 60 hours a week, going all out, making 200 grand a year. The woman takes time off, raises kids, is not go go go. Now they’re 50 years old. The husband is making 200 grand a year, the woman is making 40 grand a year. It wasn’t discrimination. There was a different sense of urgency in each person.” He added, “You could argue that money is more important for men. I think a guy in their first job, maybe because they expect to be a breadwinner someday, may be a little more money-conscious.” (At a 2010 tea party rally, Grothman said, “In the long run, a lot of women like to stay at home and have their husbands be the primary breadwinner.”)

People on food stamps don’t act poor enough: In a 2004 op-ed calling for new restrictions on the federal food stamps program, Grothman outlined the extensive research that informed his position. “I’ve interviewed over a dozen people who check out people who pay with food stamps,” he wrote, “and all felt people on food stamps ate better—or at least more costly—than they did.” He also wrote: “Observations of people who work in food stores indicate that many people who use food stamps do not act as if they are genuinely poor.”

“Many people who use food stamps do not act as if they are genuinely poor,” Grothman wrote.

God is probably mad at John Kerry: In April, Grothman appeared again on Voice of Christian Youth America, and he discussed Secretary of State Kerry’s efforts to lobby against Ugandan President Yoweri Museveni’s bill to punish gays and lesbians. “Now, usually I associate the United States with being a positive influence on Africa,” Grothman said. “You associate the United States with sending missionaries to Africa…Instead, what we have is the secretary of state going to Africa and educating Ugandans or saying he is going to send American scientists to Uganda to explain how normal homosexuality is. Think about that. What must God think of our country?”

The Kwanzaa conspiracy: A December 2012 press release issued by Grothman’s state senate office asked, “Why Must We Still Hear About Kwanzaa?” In it, Grothman claimed that Kwanzaa is a phony holiday promoted by “white left-wingers who try to shove this down black people’s throats in an effort to divide Americans.” He urged “mainstream Americans” to be “more outspoken on this issue. It’s time it’s slapped down once and for all.”

Affirmative action is “offensive”: Following the US Supreme Court’s 2014 ruling in Schuette v. Coalition to Defend Affirmative Action, which upheld a ban on racial preferences in college admissions, Grothman said he would re-up a previous bill outlawing all race- and gender-based affirmative action programs in Wisconsin. “There’s no question that affirmative action is an idea whose time has come and gone,” he told Wisconsin Public Radio. “It’s offensive and it’s very anti-business.”

If he could turn back time: Grothman told an interviewer in 2010, “Did people even know what homosexuality was in high school in 1975? I don’t remember any discussion about that at the time. There were a few guys who would make fun of a few effeminate boys, but that’s a different thing than homosexuality. Homosexuality was not on anyone’s radar. And that’s a good thing.” But Grothman doesn’t just miss the ’70s; he’s also said he wants to turn the clock back to the 1950s.