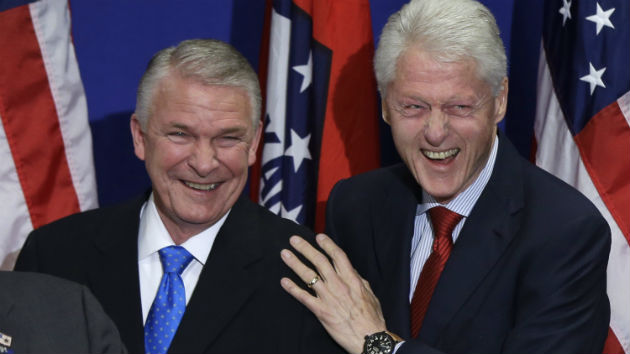 James Lee Witt, candidate for Congress in Arkansas’ 4th District, wipes away a fresh gob of tobacco spit with his brown cowboy boots and tells me about his old friend Bill.

“He was down here rededicating the Greers Ferry Dam…and he called me after that, because my wife had passed away you know, and he…visited with me for a little while,” Witt says, recalling a recent conversation with the 43rd president, as we wait for the start of a parade in Arkadelphia. “I said, ‘I need to tell you something,’ and he said ‘What’s that'” I said, ‘I think I’m gonna run for Congress in the 4th District.’ And he said”—here Witt breaks into his finest Clinton impression—”‘James Lee, I think that’s a great idea!'”

It was, at least at first. For Democrats, the rural 4th District, stretching from the southwest corner of the state to the edge of the Ozarks and the Little Rock suburbs, is the one that got away. In 2010, a year Democrats lost every other election for national office in Arkansas, Clinton’s home district stayed blue by 19 points—only to fall into Republican hands two years later. Witt, a farmer turned FEMA director whose service in the Clinton administration was hailed by Republicans and Democrats alike, seemed like the party’s best shot at winning it back. But the only polling of the race thus far has shown him trailing badly to Republican Bruce Westerman, the majority leader of the state House of Representatives.

Now the party is faced with an ominous prospect: If a guy from Wildcat Hollow like James Lee Witt can’t make it in a place like the 4th, just what hope is there for any other Democrat?

Witt hails from a tucked-away corner of Yell County, just outside the town of Dardanelle (pop. 4,745). Outsiders know Dardanelle, if they know it at all, as the stomping grounds of Mattie Ross, Charles Portis’ fictional heroine in True Grit. It is chickens and cattle country in the shadows of the Ouachitas, where Witt grew up without electricity, served as county judge, ran field operations for his friend Bill’s gubernatorial campaigns, and eventually bought the plantation where his family had toiled as tenant farmers. But it’s also the hometown of the man whose job Witt now wants—the district’s current GOP congressman Tom Cotton, who’s running for Senate against Mark Pryor. Naturally, they’re neighbors.

In mid-September, I made the 80-minute drive from Little Rock to see why a place that used to turn out down-the-middle Democrats like James Lee Witt was now producing Republicans like Cotton, a starve-the-beast conservative who views the farm bill and FEMA funding—bread-and-butter budget items in rural Arkansas—as an ideological affront.

Dardanelle is small. When I looked for a place to stay in town on CouchSurfing.org, a social network that matches travelers who need a place to stay with obliging hosts, I almost ended up on the futon of Cotton’s step-second-cousin. (Mrs. Cotton, Tom’s mother Avis, had taught him math.) When I stopped by the Dardanelle Sand Lizards Friday night high school football game, I heard Len Cotton (Tom’s dad) calling the game from the public address system, and watched Witt’s grandson start at wide receiver. Witt had financed the new stadium lights, and in the course of introducing myself to strangers, I met one of his two sons, and an in-law.

Cotton’s politics have made him a favorite of DC conservative institutions such as the Weekly Standard, which has devoted slobbering coverage to his rise fixating on his roots. (The Standard‘s 2011 profile of Cotton was titled “True Grit.”) It’s a wonderful trope—a conservative country boy who has brought Real America conservative values to Washington.

But the truth is that there aren’t many Tom Cottons in Dardanelle, or even the 4th District. Kids in Yell County don’t walk around quoting the Federalist Papers and dream of drowning government in the bath tub. Instead, there are a lot of people like Len and Avis Cotton, lifelong Democrats who have held down government jobs while raising cattle. (Len worked in the state department of health for 37 years; Avis was principal at Dardanelle High.) They were big supporters not just of Bill Clinton, who came to Hot Springs in April to raise money for Witt, but of Mike Beebe, the retiring Democratic governor, who won reelection in a landslide in 2010, the same year voters overwhelmingly rejected two-term Democratic Sen. Blanche Lincoln.

For years the county has harbored a fiercely independent reputation befitting its nickname, “The Free State of Yell.” Now Yell County is starting to act less and like the Free State of Yell and more and more like every other rural white county in Arkansas. Democratic candidates still held down large margins at the local level in 2012, but at the top of the ticket, Mitt Romney won the county by 30 points. “I’ve heard this from a county judge running,” former Democratic state Rep. Nathan George tells me: “‘I will fight Obamacare!'”

The unpopularity of President Obama locally—and of policies including Obamacare—has left Democrats fighting battles they consider absurd, such as the notion that their candidate has anything to do with the man in the Oval Office. Westerman has made it clear he’s running not just against Witt, but against the entire over-reaching, lawless Obama administration. “James Lee Witt a liberal? Come on,” says Mike Merritt, a Democrat in a red Sand Lizards jacket. “It’s not James Lee. I mean you won’t find anybody anywhere who will even think of trying to attack his character.” But the label has hurt. “It’s frustrating because we’re not electing a president.”

Running in the president’s party is a difficult line to walk, even if you’re the guy George W. Bush singled out during a 2000 presidential debate as one of Bill Clinton’s best ideas—even if your name is carved in stone on the ground outside the high school football stadium. As a result,  Witt has to walk a tightrope when outlining his positions. “I wouldn’t have voted for the Affordable Care Act if I’d had been there, not in the shape it was in, 2,700 pages, you know, but now it’s law,” he says. “What I think you have to do now is try to fix it. More affordable, more accessible, with less co-pay. Which I think is doable. The more people you get signed up, the less expensive it’s gonna be anyway.”

Witt believes his throwback shtick can bring Arkansas’ Romney Democrats back into the blue column, in part, because he considers himself one of them. “I think Arkansas is different and the 4th District is different,” Witt says when I ask why the district shouldn’t just stay red. “People in today’s world vote more for the person. And I’ve met lots and lots of voters like that. I vote Republican and Democrat.”

Arkansas’ party-bending politics is visible in issues like the “private option,” an offshoot of the Affordable Care Act that was passed by the Republican Legislature and broadly popular, and the ballot referendum to increase the minimum wage, which Witt supports and state Democrats hope to turn into an electoral wedge in November. It’s populist economic issues like that, historically, that have kept voters sending Democrats to Little Rock and Washington. But lately, Republicans have moved to take those issues off the table. Gubernatorial nominee Asa Hutchinson came out in favor of the wage hike; so did Cotton, much to everyone’s surprise.

(Westerman, Witt’s opponent and the state’s first Republican majority leader, opposes the minimum-wage initiative, as does French Hill, a banker running for an open House seat in the 2nd District.)

“You almost had to whisper if you asked for a Republican ballot,” says Eddie Arnold, a county GOP chair in Arkadelphia, an hour south of Dardanelle, when I ask him about the district’s not-so-distant Democratic dominance as we huddle inside the fair exhibitors barn. But now he’s all but ready to write off Witt. “When I looked at him, I thought it might be a really competitive race, but we haven’t seen it,” he says.

“We’re looking at the old guard versus the new guard.”

Back in the scorching heat of Arkadelphia, I ask Witt what advice Clinton gave him when he entered the race. “Just run like you’re behind every day,” Witt says. It’s an unfamiliar position for Arkansas Democrats—but one they may need to get used to.