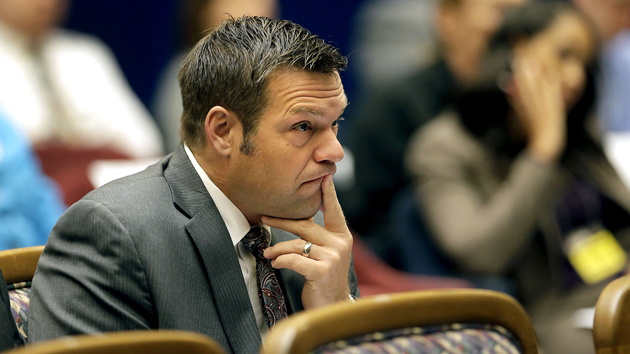 Republican Kris Kobach has managed to established an outsized persona for only being a one-term secretary of state in Kansas. Kobach became a national liberal scourge after he won office in 2010. He loaned out his services to help governors in Arizona, Alabama, and Georgia craft anti-immigration legislation, pioneering the idea of self-deportation that Mitt Romney touted in his presidential campaign. In Kansas, he imposed harsh voter ID laws to keep Democrat-inclined voters away from the ballot; just last week, he went to court against Chad Taylor—a Dem who wanted to drop his Senate campaign—in order to keep Taylor’s name on the ballot and improve the Republican candidate’s odds (the state Supreme Court ruled against Kobach last week).

Yet after becoming a hero to the right, Kobach is now struggling to hold onto office, trailing or tied in recent polls. And he can thank Kansas Gov. Sam Brownback for his troubles, since Brownback’s decisions to alienate moderate Republicans ended up driving Kobach’s opponent out of the party and made her determined to take Kobach down.

“We have a secretary of state who has been AWOL from Kansas,” Jean Schodorf, the Democrat challenging Kobach, told me last month. “He would rather be representing Arizona. Because he has been gone and had a personal agenda, the secretary of state’s office is falling apart.”

I met Schodorf one Tuesday morning in mid-August at the Sedgwick County Democrats office in Wichita. It would have been an unusual setting to interview her a few years ago. She had served three terms as a Republican in the state Senate, but lost her primary in 2012 to a right-wing challenger—one backed by Brownback, the state Chamber of Commerce, and Koch-founded Americans for Prosperity. Schodorf had been a Republican since birth, but the day after she left office in 2013, she headed to the county office with her daughter and switched her party affiliation to D. “Republican, that was a past life,” she says. “They left me.”

Midway through our conversation an aide interrupted us, excited to share the latest poll numbers flashing across his cellphone screen. She was down just 5 percent—”just outside the margin of error”—the closest she’d gotten by that point. But the polls have only improved for Schodorf since then—tying Kobach before the end of August, then opening a slight lead in early September. (Another poll from last week had her down 1 point.) Kobach—who won by a commanding 22 percent in 2010—was supposed to have an easy reelection, but his fortunes have fallen with Brownback, whose struggles at the top of the ticket have dragged down other Republicans.

Kansas politics has long been cleaved into three separate groups: the Democrats, moderate Republicans like Schodorf, and Brownback’s wing of staunch conservatives. Schodorf and the moderates had long held sway in the state Senate, but after Brownback became governor in 2011 he would brook no dissent; when the moderates bucked his efforts to erase the state’s income tax, Brownback and his allies recruited challengers, with nine incumbent moderates losing their primary campaigns in 2012.

“Voting is a right. Kris Kobach thinks everybody is guilty, and they must prove themselves to be able to vote.”

Kobach hails from the same conservative cohort. The 48-year-old got his undergrad at Harvard, followed by Yale Law School, spinning himself into a legal expert for right-wing causes. A former lawyer for Attorney General John Ashcroft during the Bush administration, in 2010 Kobach helped Arizona craft its infamous anti-immigration law SB 1070 (along with aiding Alabama and Georgia on similar measures later on). Once he took office as Kansas’ secretary of state the next year, Kobach played up fears of widespread in-person voter fraud—in fact, a rare occurrence—to enact a voter registration regime with a proof-of-citizenship requirement. He convinced the Legislature to pass a bill granting him the ability to rewrite the state’s election code to add voter ID (Schodorf voted for voter ID, but said she regrets the decision).

Kobach’s requirements for verifying citizenship conflict with federal rules, so voters he objects to are allowed to participant in Senate or House races. But the local and state section of the ballot is tossed aside uncounted. More than 18,000 voters fell into this weird no-man’s-land during the primaries this past August. “That’s untenable,” Schodorf says. “That’s un-American.”

Schodorf has anchored her campaign around rolling back Kobach’s harsh voter restrictions. “Voting is a right,” she says. “Kris Kobach thinks everybody is guilty, and they must prove themselves to be able to vote. And I say that is not the American way, we all have a right to vote. If we are citizens, we have a right to vote. We do not have to prove who we are. If there are suspicions, then there is a process for law enforcement to investigate. But to insinuate that every person is guilty is wrong.”

While voter ID is now required by law, Schodorf says she would rather switch the burden of citizenship proof off of voters and onto the state, claiming that as secretary of state she could use discretion to stop kicking voters off the rolls automatically. “We were promised that everyone would be able to vote who was a citizen,” she says. “The law needs to be enforced or changed so that citizens can register to vote without being hassled, without having to go through all of these hoops.”