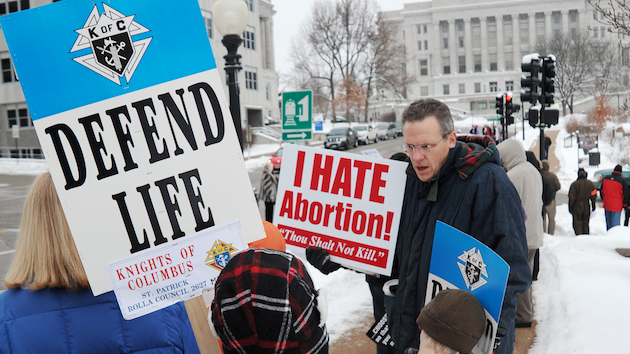 Missouri’s Republican-controlled Legislature is poised to pass one of the harshest abortion laws in the county next week when lawmakers return to the state capitol for a last-minute special session.

GOP lawmakers called the session to try to override several of Democratic Gov. Jay Nixon’s vetoes. At the top of the list: A bill that would force women seeking an abortion—including victims of rape and incest—to wait 72 hours between their first visit to a clinic and the procedure itself. Nixon vetoed the bill in June.

A vote could come as early as September 10. If the bill receives the two-thirds majorities in the House and the Senate required to override Nixon’s veto, Missouri would become the third state, after South Dakota and Utah, to impose a three-day waiting period, the longest in the country. A veto override is nearly certain: In May, when the bill first passed, it received a veto-proof majority in the House and was one vote shy of this benchmark in the Senate; a Republican senator who was absent that day intends to support the bill.

Missouri already requires a woman who wants an abortion to wait 24 hours from her first visit before obtaining the procedure. “Taking it from one day to three days? I don’t think it’s creating an extra obstacle for the mothers,” says Republican Rep. Kevin Elmer, the bill’s sponsor in the House.

Democrats and reproductive rights advocates who oppose the bill say that a three-day waiting period is burdensome to women who don’t live near St. Louis, the location of the state’s only abortion clinic; those women would have to make two trips out of town in order to have an abortion or stay in St. Louis for several nights. The law, opponents say, would pose an extra hardship for women who can’t afford to miss several days of work.

“A 72-hour waiting period is completely absurd,” argues Democratic Sen. Jolie Justus, the Senate minority leader. “The reality is, they simply want to outlaw abortion in the state of Missouri.”

Missouri lawmakers proposed more than two dozen abortion restrictions this year, all of them targeted at the St. Louis clinic. Missouri already has more abortion-related restrictions on the book than almost any other state in the country. Abortion providers must offer women the opportunity to view an ultrasound of the fetus, and abortion clinics in Missouri must meet the requirements of an ambulatory surgical center; these requirements are expensive to meet and they are not medically necessary for most abortions. These laws have resulted in the closure of all but one of the state’s clinics.

“The reason this [bill] is so bad is that it’s layered on top of decades of some of the most horrible legislation relating to women’s health I’ve seen anywhere in the country,” Justus says. She notes that even some Democrats who have favorable ratings from the advocacy group Right to Life opposed the bill in May. “It’s that restrictive,” she says.

Unlike Utah’s law, the Missouri bill does not include an exception for women who become pregnant as a result of rape or incest—one reason why Nixon vetoed it. But Elmer tells Mother Jones he never considered adding such an exception.

“I believe that life begins at conception,” he says. “And I’m not to discriminate against any life because of how it was conceived. I don’t disregard the significance of the tragic events that those women suffer from. But we’re still weighing that against the right of the unborn child to live…We’re asking all mothers just to give it another 48 hours to think about what is it they’re doing when they kill their unborn child.”

Nixon’s office did not reply to a request for comment.

Democratic opponents of the bill warn that a three-day waiting period could be tossed out in court. A federal judge blocked South Dakota’s waiting-period law in June 2012, saying that the law was unconstitutional because it placed an “undue burden” on women seeking to exercise their right to an abortion. (Planned Parenthood and the American Civil Liberties Union dropped that lawsuit in December 2012 in order to focus on other litigation.)

Elmer says he is optimistic that the law would survive a similar court challenge. For now, he is focused on making sure the bill wins the required supermajority in the House. “This is legislation,” says Elmer. “So you can never be confident. But I like our chances.”