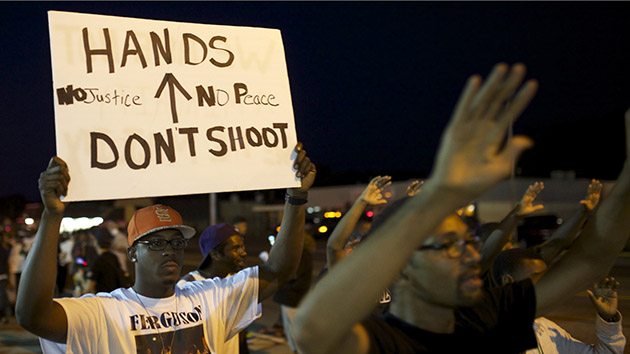 Since a police officer shot and killed Michael Brown in Ferguson, Missouri, one month ago, reporters and researchers have scrambled to find detailed data on how often cops wound or kill civilians. What they’ve uncovered has been frustratingly incomplete: Perhaps not surprisingly, law enforcement agencies don’t keep very good stats on incidents that turn deadly. In short, it’s a mystery exactly how many Americans are shot by the police every year.

However, as I and others have reported, there is some national data out there. It’s not complete, but it provides a general idea of how many people die at the hands of the police—and the significant racial disparity among them:

• The Federal Bureau of Investigation’s Uniform Crime Reporting program records that 410 people were killed in justifiable homicides by police in 2012. While the FBI collects information on the victims’ race, it does not publish the overall racial breakdown.

• The Justice Department’s Bureau of Justice Statistics reports that between 2003 and 2009 there were more than 2,900 arrest-related deaths involving law enforcement. Averaged over seven years, that’s about 420 deaths a year. While BJS does not provide the annual number of arrest-related deaths by race or ethnicity, a rough calculation based on its data shows that black people were about four times as likely to die in custody or while being arrested than whites.

Note: Most arrest-related deaths by homicide are by law enforcement, not private citizens. Rate calculated by dividing deaths by the average Census population for each race in 2003-09. “Other” includes American Indians, Alaska Natives, Asians, Native Hawaiians, other Pacific Islander, and persons of two or more races.

• The Centers for Disease Control and Prevention’s National Vital Statistics System offers another view into officers’ use of deadly force. In 2011, the CDC counted 460 people who died by “legal intervention” involving a firearm discharge. In theory, this includes any death caused by a law enforcement or state agent (it does not include legal executions).

The CDC’s cause-of-death data, based on death certificates collected at the state level, also reveals a profound racial disparity among the victims of police shootings. Between 1968 and 2011, black people were between two to eight times more likely to die at the hands of law enforcement than whites. Annually, over those 40 years, a black person was on average 4.2 times as likely to get shot and killed by a cop than a white person. The disparity dropped to 2-to-1 between 2003 and 2009, lower than the 4-to-1 disparity shown in the BJS data over those same years. The CDC’s database of emergency room records also shows similar racial disparities among those injured by police.

However, these numbers provide an extremely limited view of the lethal use of force by law enforcement. For reasons that have been outlined by USA Today, Vox, FiveThirtyEight, the Washington Post, The Atlantic, and others, the FBI data is pretty unreliable and represents a conservative estimate. Some 18,000 agencies contribute to the FBI’s broader crime reporting program, but only about 750 reported their justifiable homicide figures in 2012. New York state, for example, does not report justifiable homicides to the FBI, according to bureau spokesman Stephen G. Fischer Jr.

The FBI’s data only counts “felons,” but its definition of a felon differs from the common legal understanding of a felon as someone who has been convicted of a felony.

A police officer answered a bank alarm and surprised the robber coming out of the bank. The robber saw the responding officer and fired at him. The officer returned fire, killing the robber. The officer was charged in a court of record as a matter of routine in such cases.

And since the classification of felonies—usually serious criminal offenses such as murder and assault—may vary by jurisdiction, UCR staff states, there is no standard definition of the word.

This leaves much room for interpretation. Was Michael Brown committing a felony at the time Officer Darren Wilson shot him? Local authorities in Ferguson have claimed that Brown was a robbery suspect and that he assaulted Wilson prior to the shooting. Whether Brown’s case might be classified as a justifiable homicide hinges on the details of what happened in the moments before his death and whether local investigations determine that Wilson was justified to shoot. The FBI’s records ultimately rely on police departments’ word and the assumption that the victim was a criminal.

BJS, meanwhile, collects its data from state-level coordinators that identify arrest-related deaths in part by surveying law enforcement agencies. But the majority of these coordinators do not contact each law enforcement agency in their states, so BJS has no way of telling how many deaths have gone unidentified, according to spokesperson Kara McCarthy. BJS collects some details about each reported death, such as how the victims died, whether they were armed, whether they were intoxicated or displayed signs of mental illness, and whether charges had been filed against them at the time of death. It does not collect information about whether the victims had any prior convictions.

Some of the gaps in the FBI and BJS data can be filled in by the CDC data, but there are limitations here, too. The CDC data does not evaluate whether these killings were justified or not. The agency categorizes fatalities by International Classification of Diseases codes, which are used by coroners and medical examiners to record the medical cause, not the legal justification, of death. And death certificates aren’t immune to reporting problems, explains Robert Anderson, chief of the CDC’s Mortality Statistics Branch. This data is still “at the mercy of the medical examiner and coroner,” who often write death certificates and may not include details about officer involvement. Anderson says those details are necessary in order for the CDC to categorize a death as a legal intervention.

Better data, and the will to collect it, is necessary to get the full picture of how many criminals and law-abiding citizens are killed by police every year. Until then Michael Brown—and others like him—may never even become a statistic.